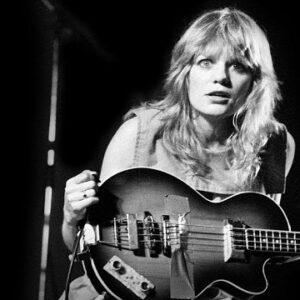 American guitarist and singer Tina Weymouth is best known for being a co-founder of “Talking Heads,” one of the most lauded rock bands of the 1980s. She co-founded the band with her husband Chris Frantz and friend David Byrne in the 1980s, and the group quickly rose to fame, pioneering the new-age rock movement. Later, she and her husband started a different band called “Tom Tom Club” which was almost like a side project of their primary band, “Talking Heads,” and they collaborated on a lot of popular music. According to Tina, who describes herself as a “self-taught musician,” artists and bands like the Beatles, Bob Dylan, and Peter Paul served as inspirations.

The career of Tina Weymouth

At the age of twelve, Tina enlisted in Nancy Tufts’ amateur musical ensemble, “The Potomac English Hand Bell Ringers.” After numerous trips on the road with the band, Tina started to take an actual interest in singing and picked up the guitar on her own. She met Chris Frantz and David Byrne at the Rhode Island School of Design, two persons who would forever alter the path of her life. Together, the three of them created the band “Talking Heads,” and Tina accepted Chris’s invitation to join as the bassist. To accommodate rehearsals, they relocated to New York City and rented an apartment.

Within a few months, Tina developed into an excellent bassist, and Byrne began penning some of their later-famous tunes. At New York’s legendary CBGB nightclub in 1975, their band, “Talking Heads,” had its stage debut with “The Ramones,” performing two of Byrne’s well-known songs, “Psycho Killer” and “Warning Sign,” along with a few more renditions of classic songs. Their debut was a success, and the band immediately gained popularity with the crowd.

The next year, “Talking Heads” recruited guitarist Jerry Harrison to the lineup in an effort to grow the group and broaden its punk rock appeal. The punk rock label Sire Record soon made them an offer for a contract, which they eagerly accepted. The band’s debut album, “Talking Heads: 77,” was moderately successful commercially when it was released in 1977. Two additional albums, “Fear of Music” and “Remain in Light,” were subsequently published in 1979 and 1980, respectively.

The band sort of took a break after the publication of “Remain in Light,” at which point Tina and Frantz started their own new wave band, “Tom Tom Club,” and kept themselves busy by producing singles like “Wordy Rappinghood” and “Genius of Love.”

Tina was highly furious with David Byrne when he made it plain that he was not interested in recording another album with the “Talking Heads” and publicly chastised him for being unable to keep his promises. The remaining band members did reunite and form The Heads, who in 1996 produced the album “No Talking, Just Head.” Later, Tina was appointed as a judge for the Independent Music Awards, a competition that helps independent musicians advance their careers.

Laura Bouchage and former US Navy Vice Admiral Ralph Weymouth welcomed Tina Weymouth into the world on November 22, 1950, as Martina Michèle Weymouth in Coronado, California. Tina grew up among her seven siblings in a huge family. She works on musical projects alongside two of her siblings, Laura and Lani, while her brother Yann Weymouth is an architect best known for creating the Salvador Dal Museum.

American musician Tina Weymouth has a $20 million net worth. She was given the stage name Tina Weymouth when she was a child and was born Martina Michele Weymouth on November 1950. She is well-known for her work with Tom Tom Club and the band Talking Heads. She played guitar (or bass) in both of the ventures she helped co-found and had a significant influence on both the music and the band members. Weymouth joined the Talking Heads after Chris Frantz approached her about doing so. Frantz played drums for the Talking Heads as well as the Tom Tom Club. At the time, they were dating. Weymouth has seven siblings, and two of them, Lani and Laura, were also Tom Tom Club performers. Vice Admiral Ralph, her father, retired from the US Navy. She dated her bandmate, Chris Frantz, for a number of years until they got married in 1977. Robin and Egan, the couple’s two boys, were born. In Fairfield, Connecticut, the family calls itself home. Weymouth’s older brother, Yann, spent a number of years married to Lally Weymouth, a publisher for the Washington Post. Katharine, Weymouth’s niece, currently holds that position.