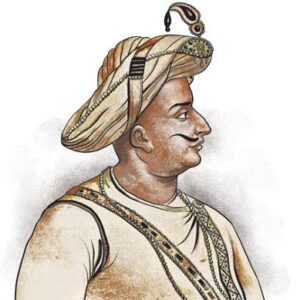 Tipu Sultan was a monarch of the Kingdom of Mysore who was famed for his valor in battles with the British East India Company. Regarded as India’s first independence warrior for his violent battles against the British who attempted to overrun the regions under the sultan’s authority, he is renowned for his gallantry and courage. The Treaty of Mangalore, which he signed with the British East India Company to terminate the Second Anglo-Mysore War, marked the final time an Indian king dictated terms to the British. Tipu Sultan, the eldest son of Mysore’s Sultan Hyder Ali, gained the kingdom upon the death of his father in 1782. As monarch, he instituted a number of administrative changes and extended the iron-cased Mysorean rockets he would later employ against the British advances. As a result of his father’s diplomatic political ties with the French, young Tipu Sultan got military instruction from French officers. After assuming power, he maintained his father’s policy of allying with the French in their conflict with the British. He fought multiple wars against the British and did his best to prevent the British East India Company from capturing his realm. He perished fighting in the Fourth Anglo-Mysore War, having remained loyal to his country till the end.

Although illiterate himself, Hyder Ali was adamant that his eldest son has an education befitting a royal. Tipu Sultan was educated in the Hindustani language (Hindi-Urdu), Persian, Arabic, Kannada, the Quran, Islamic law, riding, shooting, and fencing.

As a result of his father’s political ties to the French, the young prince was instructed in military and political affairs by extremely competent French officers. In 1766, at the age of 15, he fought alongside his father against the British in the First Mysore War.

Tipu Sultan played key roles in his father’s victorious military conquests, while Hyder grew to become the most powerful king in all of southern India.

The British captured the French-controlled port of Mahé, which was protected by Tipu, in 1779. In reaction, Hyder Ali launched hostilities against the British in 1780, and the early campaigns of what became known as the Second Anglo-Mysore War were a resounding victory. Nonetheless, as the battle continued, Hyder Ali developed cancer and died in December 1782.

On 22 December 1782, following the death of his father, Tipu Sultan was appointed king of Mysore. By forming alliances with the Marathas and the Mughals, he immediately began developing military measures to thwart the British’s expansion. Eventually, he was successful in 1784 in concluding the Second Mysore War by signing the Treaty of Mangalore with the British.

As a monarch, Tipu Sultan demonstrated his effectiveness. He finished his father’s initiatives, built roads, bridges, public buildings, ports, etc., and produced significant military advancements in the use of rocketry in warfare. By dint of his tenacity, he amassed a formidable military force that caused severe damage on the British soldiers.

Now more ambitious, he intended to expand his territory and set his sights on Travancore, which, per the Treaty of Mangalore, was a British East India Company ally. In December 1789, he launched an assault against the Travancore lines but was met with resistance from the Maharajah of Travancore’s troops. This signified the start of the Third Anglo–Mysore War.

Lord Cornwallis forged alliances with the Marathas and the Nizam of Hyderabad to combat Tipu and prepared a formidable military in response to the Maharajah of Travancore’s request for assistance from the East India Company.

In 1790, the company forces assaulted Tipu Sultan and quickly seized control of the majority of the Coimbatore district. Tipu counterattacked, although his efforts were not particularly effective. After more than two years of conflict, he signed the Treaty of Seringapatam in 1792, which resulted in the loss of a number of provinces, including Malabar and Mangalore.

Even though he had lost many of his lands, the British still viewed the valiant Tipu Sultan as a serious foe. The East India Company, in partnership with the Marathas and the Nizam, attacked and seized Srirangapatna, the capital of Mysore, during the Fourth Anglo-Mysore War in 1799. Tipu Sultan perished in the conflict.

During the Second Anglo-Mysore War, he displayed his valor as a courageous fighter. In the earliest conflicts after being dispatched by his father to face the British army, he has shown amazing bravery. He succeeded his father as ruler of Mysore in 1782 and finished the war with the Treaty of Mangalore in 1784. His father died in the midst of the conflict.

The Third Anglo-Mysore War was a further significant conflict he fought against British soldiers. This campaign, however, was a catastrophic disaster that cost the sultan dearly.

According to the terms of the Treaty of Seringapatam, he was required to cede around half of his domains to the British East India Company, representatives of the Nizam of Hyderabad, and the Mahratta Empire.

He died on May 4, 1799, while fighting British forces in the Fourth Anglo-Mysore War. He was a valiant warrior. As one of the first Indian monarchs to die on the battlefield defending his country against the Colonial British, he was formally recognized as a freedom fighter by the Government of India.

In certain sections of India and Pakistan, he is revered as a hero of the Indian independence movement. However, in certain regions of India, he is viewed as a despotic tyrant.
The National Army Museum of the British Army ranks Tipu Sultan as one of the greatest enemy commanders the British Army has ever faced.

Tipu, also known as the Tiger of Mysore, adopted this animal as the emblem (bubri/ Babri) of his kingdom.
Former Indian President Dr. APJ Abdul Kalam referred to Tipu Sultan as the inventor of the world’s first combat rocket.

Tipu is one of the wealthiest and most beloved politicians in history. According to our research, Wikipedia, Forbes, and Business Insider, Tipu Sultan has an estimated net worth of $1.5 million.