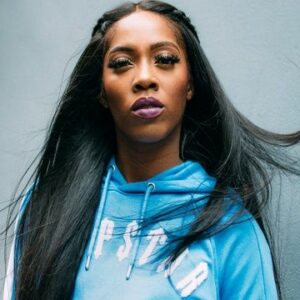 Tiwa Savage is one of the burgeoning stars of the Nigerian music scene. She is a singer, songwriter, actor, and performer. The Grammy-nominated singer started her career performing background vocals for George Michael, but she has since collaborated with several well-known artists, including Kelly Clarkson, Mary J. Blige, and Chaka Khan. Savage has performed onstage alongside notable artists from the business during the course of her 22-year career, including Destiny’s Child, Sting, and Eminem. She has composed songs for artists like Grammy Award-winning producer Babyface and “American Idol” winner Fantasia Barrino. As of 2018, she has two studio albums out and has appeared on one compilation album. Savage now holds recording contracts with the Nigerian label “Mavin Records” and a songwriting deal with “Sony/ATV Music Publishing.” In 2016, she also revealed a management and publishing agreement with Roc Nation, a Sony affiliate created by JAY-Z. Due to her extensive time spent living in Nigeria, the UK, and the US, Savage is bilingual. She frequently performs songs in both Yoruba and English. She has one child and has been married before. She announced the dissolution of her marriage in 2016. She keeps putting her career first.

On February 5, 1980, Tiwatope Savage-Balogun was born in Ikeja, the seat of government for Lagos State. Although the singer keeps her personal affairs private, there are rumors that she has at least two brothers and a sister.

When she was 11 years old, her family moved to London, United Kingdom, allowing the singer to grow up in a really cosmopolitan environment. Savage participated in her school’s symphonic band while she was a high school student in the UK and played the trombone.

Savage studied business administration at the “University of Kent,” and she apparently found it helpful in navigating the complexities of the global music industry. Savage spent some time working for the “Royal Bank of Scotland” after earning this degree.

After being given the chance to do backing vocals for Mary J. Blige, she made the decision to concentrate more on music. She was awarded a scholarship to study professional music at the renowned “Berklee College of Music,” where she obtained her degree when she was just 27 years old. She subsequently began a lucrative career in music.

At the age of 16, Savage launched her career by providing backup vocals for British pop sensation George Michael. Since then, she has collaborated with a variety of international superstars, including Mary J. Blige, Blue Cantrell, Emma Bunton, Kelly Clarkson, and Andrea Bocelli. She has performed on stages alongside legendary artists like Eminem, Destiny’s Child, Destiny’s Child, Sting, 50 Cent, ‘The Black Eyed Peas,’ Robbie Williams, and others.

She competed in the UK version of “The X Factor” in 2006 while still a student at Berklee. Savage remembers her time on the program as a sobering journey into the shadowy side of fame, despite making it to the final 24. The singer reportedly struggled to get used to being in the spotlight and afterward called learning she wouldn’t make it to the final 12 “awful.”

She was able to clinch a songwriting agreement with industry behemoth Sony/ATV in 2009, which enabled her to collaborate on songs with artists including Fantasia Barrino, Monica, Babyface, and M. The most prominent of these duets is her soul-inspired duet with Monica, “Catch Me,” a ballad with a soulful flavor. Another notable collaboration was for the song “Collard Greens & Cornbread” with Fantasia, which the next year garnered a Grammy nomination.

The Nigerian adaption of an American play, “For Coloured Girls,” marked the singer’s acting debut in 2011. She also signed an endorsement contract with “Pepsi,” being the first female musician from Africa to do so. Together with MC IllRymz, she co-hosted the second season of “Nigerian Idol.”

After meeting Tunji Balogun, who would later become her husband and who was working as an A&R representative for “Interscope Records” at the time, Savage learned about the quickly expanding Afropop culture back in Nigeria. She returned to Nigeria in search of a solo career but was met with considerable resistance at first. She persisted though, and she and Balogun eventually established their own label imprint, “323 Entertainment.”

Savage’s debut single, “Kele Kele Love,” which was jointly released by “Mavin” and “323,” was extremely well-received and successful. It was then followed by “Ife Wa Gbona,” “Without My Heart,” and “Love Me (3x).” Her debut album, “Once Upon a Time” (2013), which was ultimately nominated for multiple prizes, was eventually accompanied by these singles.

With a role in the ‘MTV’ series ‘Shuga,’ Savage advanced her acting career in 2013. She soon proclaimed that she had “the talent” for acting and intended to do it more. She also agreed to endorse “MTN Nigeria,” “Maggi,” which is owned by “Nestlé,” and “Forte Oil.”

In 2014, she released promotional singles (such as “Love in Yellow”), label-mate collaborations (such as “Dorobucci”), and music videos (such as “Wanted” from her debut album). The movie “Wanted” received a ferocious public outcry on social media. Despite this, Savage joined Miguel, Professor, and other artists in a performance at the 2014 “MTV Africa Music Awards.” She also worked on a song for DSTV’s “Africa Rising” campaign, which aims to promote African participation in community-based social investment programs, with a number of international artists.

She signed a management and distribution deal with “Roc Nation” in 2016, making her the first Nigerian artist to do so.

On November 23, 2013, Savage wed her partner, Tunji “Tee Billz” Balogun, in a religious ceremony. The next year, they celebrated another “white wedding” in Dubai.
In January 2015, Savage and Balogun made the pregnancy news public. In June 2015, she gave birth to their son Jamil Balogun.

In 2016, Balogun went on a social media binge, accusing his wife of adultery and her family of practicing witchcraft. Balogun had a significant drug problem, was financially irresponsible, and their marriage had been “finished for a long,” according to later revelations from Savage.

Tiwa Savage has been in a few foreign performances and serves as an ambassador for a number of companies, including Konga, Forte Oil, Pepsi, and Nestle Maggi chicken cubes. The current estimate of Tiwa Savage’s net worth is $1 million, making her the richest female musician in Nigeria and probably all of Africa.

She has funded youth engagement organizations and breast cancer screening initiatives across Nigeria since she has a keen interest in charity. She is also eager to promote safe sex practices and HIV/AIDS awareness.

To provide African kids with the chances that were denied to her as a youngster, she intends to create a music school.

She has urged new mothers to defy social expectations and work “even harder” after giving birth by encouraging them to “go against the grain.”