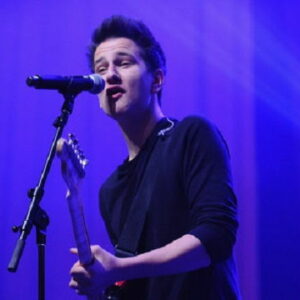 The youngest member of the American rock and pop group “Before You Exit,” which has its roots in Orlando, is Toby McDonough. At the age of 12, he joined his older brother’s band as a vocalist after beginning to sing in the local church choir. He can play the piano, guitar, and synthesizer as well. His debut appearance with the band was for the instantly popular song “What Makes You Beautiful.” He is also regarded as the group’s greatest dancer. When the band was asked to play at Brazil’s 2012 NoCapricho Festiva, Toby showed that he was a skilled musician not long after joining the group. Three EPs and six singles that his band has released have achieved international success. Their song “Model” won the yearly Macy’s iHeartRadio Rising Star competition and peaked at number one on the Philippine iTunes charts. On social media, Toby is active and has a sizable fanbase that adores him much.

From the age of seven, Toby McDonough joined his brothers in the church choir. In 2007, his elder brother, Connor McDonough, and Braiden Wood founded the band “Before You Exit.” With the release of the song “What Makes You Beautiful” in 2012, Toby received his first major break as a band member.
He has been singing and playing the guitar, piano, and keyboard since that time. He is popular with his fans and is active on social media in addition to being a musician.

Career in Music of Toby McDonough

Toby McDonough joined the rock group “Before You Exit” in 2012. The band’s name, as its name implies, was motivated by the notion that everyone should make a difference before leaving. His debut song with the group was a cover of “One Direction” called “What Makes You Beautiful.”

Along with his singing skills, he quickly gained recognition as the group’s greatest dancer. His inclusion in the group raised their popularity and led to an offer to play at Brazil’s 2012 NoCapricho Festiva.

Toby is the newest member of the group, which also includes his two brothers Riley and Connor McDonough, as well as Braiden Wood, Thomas Silvers, and Chris Ganoudis. The band, which was founded in 2007, released its debut single, “I Like That,” which became popular due to its love-themed lyrics and rock sound.
The group backed English artist Olly Murs on the North American leg of his “Right Place Right Time Tour” in June 2016 and released their EP named “All The Lights.” They also supported Australian artist Cody Simpson on his “Paradise Tour” through the United States.

Three EPs, “A Short Story Long,” “Letting Go,” and “I Like That,” as well as six singles, “End of the World ft. Anth,” “A Little More of You,” “I Like That,” “Soldier,” “Dangerous,” and “Heart Like California,” have been released by Toby and his band.

Toby and his band went on a promotional tour of Singapore, Malaysia, and the Philippines in August 2017 to meet with their fans and spread their music. After opening for Fifth Harmony at the House of Blues in Orlando, they accompanied them on their “Fifth Times A Charm Tour.”
His band was honored with a float at the Macy’s Thanksgiving Day Parade after winning the yearly Macy’s iHeartRadio Rising Star competition. They performed in Europe, secured a deal with RCA Records, and their song “Model” reached the top of the Philippine iTunes charts.

Toby James G. McDonough was born Toby McDonough on January 21, 1998 in Tampa, Florida, in the United States. He grew up with his two older brothers, Riley McDonough and Connor McDonough, both of whom play in the band “Before You Exit.”

Despite being the youngest brother, Toby is the tallest at 6′ 2″. But because he was the youngest, his siblings and other band members frequently made fun of him.

The local church youth singing group is where Toby and his siblings first met Braiden Wood and Thomas Silvers and later formed their own band. Riley and Toby sing while Connor plays the guitar. He is also a guitarist, pianist, and synthesizer player.

Just prior to his band’s tour in Manila, Toby had to have an appendectomy procedure. He thankfully recovered quickly enough that he could travel with the band.
Aubrey McDonough, a Dallas native who claims to be his girlfriend, is one of his many followers. Toby, though, insists that he is still unmarried and has not yet met the woman of his dreams.

One of the wealthiest and most well-known pop singers is Toby McDonough. Toby McDonough’s net worth is roughly $1.5 million, according to our analysis of data from sources like Wikipedia, Forbes, and Business Insider.