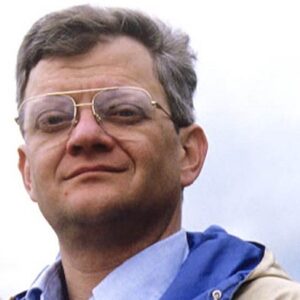 Tom Clancy’s novels are known for their intricate and detailed descriptions, witty dialogues, and realistic characters. Master of both fiction and non-fiction, he created Jack Ryan. Clancy, an insurance agent by trade, had a long-held passion for writing. He began writing novels as a hobby, which turned into a passion and then a career. His debut work was a big hit with both readers and critics. His first work, ‘The Hunt for Red October,’ showcased his unique writing style and storytelling abilities. President Ronald Reagan, at the time, praised the work as “my sort of yarn”. The compliment boosted the book’s sales to 300,000 hardcover and 2 million paperback copies. Around seventeen of his novels have been bestsellers, with over 100 million copies sold. He expanded and redefined the fiction genre. Most of his books have been made into TV shows, movies, or video games.

Tom Clancy was born in Baltimore, Maryland on April 12, 1947. He was the couple’s second child. His parents both worked for the US Postal Service, his mother in a store’s credit department.

He attended Catherine Loyola Blakefield in Towson, Maryland. In 1965, he enrolled at Loyola College to study English Literature.

During his college years, he applied for a job with the Army Reserve Officer Training Corps, a lifelong desire. But his bad vision disqualified him.

After graduation in 1969, he worked in Hartford, Connecticut for an insurance company. In 1973, he was hired by the O. F. Bowen Agency. He bought the agency after 7 years.

His writing adventures began while working at an insurance office. In 1982, he began writing his first novel, ‘The Hunt For Red October,’ which was released in 1984 by Naval Institute Press. The book introduces Jack Ryan.
The book was warmly welcomed by the audience originally. Contrary to his predictions, ‘The Hunt for Red October’ sold over 45,000 copies, making it a hit. But there was more to come.

The book sold 300,000 hardcovers and 2 million paperbacks after President Ronald Reagan praised it.
After the book’s success, he became a literary celebrity. Critics praised him for his technical skill and precision on the page.

After the huge success of his debut novel, he decided to focus on writing full-time. In 1986, he published ‘Red Storm Rising’.

In 1987, he published ‘Patriot Games,’ which expanded on the concept of Jack Ryan introduced in his debut novel. Though the book came later, the facts predate it.

He followed up his book with ‘The Cardinal of Kremlin’ in 1988. Jack Clark, Sergey Golovko, Major Alan Gregory, and Colonel Bondareko were introduced.
In 1989, he published ‘Clear and Present Danger,’ the next Jack Ryan novel. In 1991, ‘The Sum Of All Fears’ came out.

His second effort, ‘Without Remorse’, emerged in 1993. The book is the first in the Jack Ryan series and precedes ‘Patriot Games’ and ‘The Hunt for Red October’.

In 1993, he published his first non-fiction book, ‘Submarine: A Guided Tour Inside a Nuclear Warship’. Throughout his career, he wrote non-fiction books about the many branches of the US Armed Forces.
From 1994 to 1996, he published three books, two of which are Jack Ryan sequels. ‘Debt of Honor’ was followed by ‘Executive Orders’ in 1996. In the same year, he released ‘SSN: Strategies for Submarine Warfare,’ a non-Ryan work.
In 1995, he co-created the novel series Op-Center with Steve Pieczenik, written by Jeff Rovin. The series consisted of 12 books, the first being ‘Tom Clancy’s Op-Center.’

He returned to the Ryan universe in 1998 with ‘Rainbow Six’. The following year he co-created the Net Force series with Steve Pieczenik and Steve Perry. The 2010 series follows the actions of Net Force, a special division of the FBI created to combat online crime. The Net Force series had ten books.

In 2002, he wrote ‘The Bear and the Dragon’, a sequel to Ryan’s universe. In ‘The Teeth of the Tiger’, Jack Ryan Jr. and his nephews were introduced.

‘Dead or Alive’ was published in 2010, ‘Locked On’ in 2011 and ‘Threat Vector’ in 2012. Aside from the Jack Ryan series, he also wrote ‘Against All Enemies’, about a hypothetical terrorist bombing plan in Pakistan.
‘Command Authority’, the next Jack Ryan novel, came out in December 2013.

He was a maestro of fiction who created Jack Ryan. His books have been transformed into TV shows, movies, and video games. His writings have been well received, making him wealthy USD $190 million.

He married Alexandra Marie Llewellyn, a freelance writer, six months after divorcing his first wife. They met in 1997. They have a daughter. He died in October 2013.
On October 1, 2013, at Johns Hopkins Hospital, he died of an unexplained illness.

Tom Clancy was an American author and producer who died in 2013 and had a net worth of $300 million at the time of his death. He is most renowned for writing dozens of books that became popular video games and movies. Clancy was also a co-owner and vice chairman of the Baltimore Orioles’ community and public relations committee.

Interestingly, this prominent American author of military fiction and non-fiction has never served in the military or worked for the government.