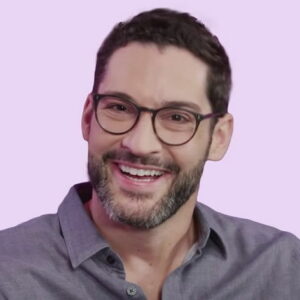 Tom Ellis is a Welsh actor best known for his roles in the British sitcom Miranda and the American series Lucifer Morningstar. He is now a successful actor in the British and American entertainment sectors. Ellis was up in Cardiff, Wales, with three sisters, the son of a music teacher and a Baptist pastor. He went to Sheffield’s High Storrs School for his education and played in the City of Sheffield Youth Orchestra during that time. He went on to the Royal Conservatoire of Scotland for his BA in Dramatic Studies. He landed his first professional acting role when he was 22 years old and has since been in a number of British and American television productions. Ellis is a humble man and the father of three lovely daughters who lives behind the screen. He is currently engaged to Meaghan Oppenheimer, a producer. He was previously married to Tamzin Outhwaite, an English actor and narrator. The actor enjoys music, dancing, and golf in his spare time.

In the television series ‘Kiss Me, Kate,’ Tom Ellis made his acting debut. He played Frank Bennett in the drama ‘Nice Guy Eddie’ in 2001, and he also starred in the TV movie ‘The Life and Adventures of Nicholas Nickleby.’ Following that, he appeared in the drama flicks ‘I’ll Be There’ and ‘Vera Drake.’ From 2005 to 2006, the actor starred as Justyn in the comedy-drama series ‘No Angels,’ which follows the lives of a healthcare assistant and three nurses in Leeds. He also appeared in the shows ‘EastEnders’ and ‘The Catherine Tate Show’ at this time.
In 2007, Ellis played Tom Milligan in an episode of ‘Doctor Who.’ He played Zak in the film ‘Miss Conception’ the following year. The series stars Heather Graham and follows the story of a lady who discovers she only has one month to conceive. When her long-term lover is sent to a remote island for work, she is forced to pursue alternative methods of conceiving a child. In 2009, he joined the cast of ‘Miranda,’ a British sitcom. In the same year, he appeared in the comedic drama ‘Monday Monday.’ Following that, he played Dr. William Rush in the medical drama series ‘Rush.’ In Fox’s urban fantasy police procedural series ‘Lucifer,’ Ellis has played the lead role of Lucifer Morningstar since 2016. In 2018, he appeared in an episode of ‘Family Guy’ as a voice actor. He played Dr. Todd in the satirical romantic comedy film ‘Isn’t It Romantic’ in 2019. Despite a $31 million budget, the film made over $48 million.

Christopher John Ellis and Marilyn Jean Ellis gave birth to Tom Ellis on November 17, 1978 in Cardiff, Wales, United Kingdom. He has two sisters, Annwen and Naomi, as well as a twin sister named Lucy. Baptist ministers are his father and one of his sisters. Robert Ellis, his uncle, is the principal of Regent’s Park College in Oxford.
Ellis attended High Storrs School before going on to the Royal Conservatoire of Scotland. In terms of his personal life, he was once married to actress Tamzin Outhwaite. Before divorcing in 2014, the couple had two daughters. Estelle Morgan, his former partner, had a daughter with him. In 2019, the actor married Meaghan Oppenheimer, a TV producer.

Tom Ellis has a net worth of $6 million.