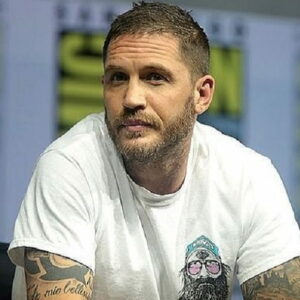 British actor and producer Tom Hardy is well recognized for his stirring roles in movies like “Mad Max: Fury Road,” “Inception,” and “The Revenant.” He first fell in love with acting as a young child, but for a few years, his drug and alcohol abuse prevented him from pursuing his goals. But after enrolling himself in two acting schools, he was kicked out of one and left the other to participate in a supermodel competition. He eventually tried his hand at acting. Hardy has never looked back since he made his television and film debuts in “Band of Brothers” and “Black Hawk Down,” respectively. He battled drug addiction through rehabilitation while still putting his full attention into acting, emerging as one of the most intriguing actors of his generation. He was cast in a number of noteworthy roles, including the lead in movies, TV shows, and stage productions. He has been a popular star in a number of movies and TV shows over the previous few years, so much so that in 2015, he made five movies in one year! He is wholly committed to his work and truly inhabits the role he plays; he once starved himself to portray a heroin addict, then later that same year, he put on some weight for the part of a heavyweight boxer in a movie that was ultimately shelved.

Tom Hardy won The Big Breakfast’s “Find Me a Supermodel” competition in 1998 at the age of 21, despite having a difficult early life.

Band of Brothers, a war drama by Steven Spielberg, served as his first TV appearance. A few months later, he was cast in Ridley Scott’s combat drama “Black Hawk Down,” his feature film debut. Although the critics praised his portrayal, the movie was attacked by military leaders and other parties.
In 2002, he starred in the science fiction movie “Star Trek: Nemesis,” playing Praetor Shinzon, the commander of the Reman warriors.

In 2003, he worked on the psychological suspense thriller “dot the I and shortly after, he traveled to Morocco for the film “Simon: An English Legionnaire,” which is about a young Englishman who fights in the French-Algerian War.

He worked on the UK horror movie “LD 50 Lethal Dose” that same year.
He played Skank in the London production of the play “In Arabia We’d All Be Kings” in 2003. He received praise for his “amazing” performance from the critics.

He appeared in the BBC drama “The Virgin Queen” in 2005, playing Robert Dudley, Elizabeth I’s boyhood pal. He had an appearance in the 2006 recreation of the 1961 TV show “A for Andromeda” on BBC Four.
He played Stuart Shorter, a homeless man who endured years of abuse, in the lead role of BBC Two’s “Stuart: A Life Backwards” in 2007.

He played a drug-addicted rapist in the British crime drama “WZ” in 2008. In the same year, he played Handsome Bob, a secret gay member of The Wild Bunch, in the British-American crime comedy movie “RocknRolla.”
He gained 19 kg in 2009 to portray the role of Bronson/Peterson in the movie “Bronson,” which is based on the life of prisoner Charles Bronson. He played a gangster in the Sky One television thriller “The Take” in June 2009. He played Heathcliff in the August episode of ITV’s “Wuthering Heights.”

In the drama “The Long Red Road,” presented at the Goodman Theatre in Chicago in 2010, he played Sam, an alcoholic. His performance received compliments. He portrayed Eames in Christopher Nolan’s science fiction thriller “Inception” that same year.

He appeared in the 2011 movie “Tinker Tailor Soldier Spy,” which was a remake of the 1979 BBC TV miniseries of the same name. He received praise from critics the same year for his performance of Tommy Riordan in the movie “Warrior.”

He played the villainous Bane in the superhero movie “This Means War” in 2012, gaining 14 kilograms for the role. He played a bootlegger in the American crime drama movie “Lawless” that same year.
Hardy portrayed Bob Saginowski, a bartender, in the American crime drama movie “The Drop,” which was directed by Michael R. He also made an appearance in the second season of the BBC drama “Peaky Blinders,” playing the role of Alfie Solomons, the leader of a Jewish gang.

He was cast in five films in 2015. He first made an appearance in “Child 44,” playing the role of Soviet secret police agent Leo Demidov. Although the movie was not well received by critics or audiences, his performance was praised.
The critics appreciated his portrayal of Max Rockatansky in his subsequent picture, “Mad Max: Fury Road,” which came out in 2015. The movie was a huge success at the box office.

He portrayed the dual roles of the mobster Kray brothers in his third film of 2015, the crime thriller “Legend.” His fourth project of 2015 was the American semi-biographical picture “The Revenant.”

He made an appearance in the 2017 war movie Dunkirk. During World War II, the British military evacuated the French port of Dunkirk. A combat photographer will also be portrayed by Hardy in the movie “Unreasonable Behavior.” He will also appear in “Fonzo,” the Al Capone movie directed by Josh Trank.

In terms of television, as of 2017, he may be seen in the Steven Knight, Edward Hardy, and BBC One TV series “Taboo.” The narrative was written by Hardy. He will also make an appearance in the 2018 film “Venom.”

One of Hardy’s most notable works is the popular war movie “Black Hawk Down.” Critics praised him for his starring performance as a villain in “Star Trek: Nemesis.” He received plaudits for his acting in “RocknRolla” as a gay hoodlum in a novel character. Lawless, The Revenant, Mad Max: Fury Road, Legend, and Inception are a few of his other significant movies.

He played a significant part in the acclaimed war drama “Band of Brothers” on television. He also received positive reviews for his roles in “The Virgin Queen,” “Wuthering Heights,” and “Peaky Blinders.”

He was nominated for Best Actor at the 2009 Crime Thriller Awards for his work in the Sky One TV drama “The Take.” He received a Scream Award in 2010 and a BAFTA Rising Star Award in 2011 for “Inception.”
For his two roles in “Legend,” he took home the Best Actor prize at the British Independent Film Awards in 2015. He was nominated for an Academy Award in 2016 for “The Revenant’s” Best Supporting Actor. For “Mad Max: Fury Road,” he also received a Critics’ Choice Movie Award for Best Actor that year.

Tom Hardy wed producer Sarah Ward in 1999. Due to his drug addiction issues, they got divorced in 2004, and he later checked himself into treatment. He lived with actress Linda Park for a year in 2003–2004 while they were together.

With his ex-girlfriend Rachael Speed, he has a son named Louis. They split up in 2009 after spending four years together. In July 2014, he wed actress Charlotte Riley. They welcomed their first kid in October 2015.