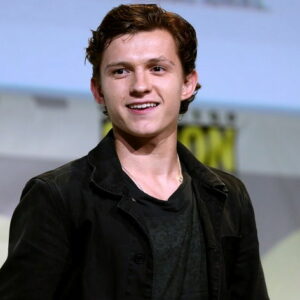 Tom Holland is a British actor who is best known for playing Spider-Man, a well-known superhero. In films like ‘Spider-Man: Homecoming,’ ‘Avengers: Infinity War,’ and ‘Captain America: Civil War,’ Tom portrayed Peter Parker. On June 28, 2008, he made his ‘West End’ theatre debut at the age of 12, when he was 12 years old. He was a major player in the hit show ‘Billy Elliot the Musical,’ which gained him the chance to meet Gordon Brown, the then-Prime Minister of the United Kingdom. In September 2008, Tom made his first appearance on television when he was interviewed by ‘Channel 5.’ He made his film debut in 2011 and has since gone on to star in more blockbusters. Tom Holland has received numerous honors for his acting abilities. He won the prestigious ‘British Academy Film Award’ in 2017. (BAFTA).

Thomas Stanley Holland was born in London, England, on June 1, 1996. His parents, Nicola Elizabeth and Dominic Holland, raised him. His father, Dominic, is a stand-up comedian, and his mother is a photographer. He spent a lot of time as a boy with his twin brothers, Sam and Harry, as well as another younger brother, Paddy.

Tom attended Wimbledon’s ‘Donhead Preparatory School,’ an exclusive day school in southwest London. Tom has always had a passion for dance and has taken dance classes since he was in elementary school. His schoolmates, on the other hand, ridiculed him because he liked to dance.

After finishing high school, he went to ‘Wimbledon College,’ where he received his bachelor’s degree in 2012. He subsequently went on to the elite ‘BRIT School for Performing Arts and Technology,’ where he studied acting and dancing.
Tom was noticed dancing at ‘Nifty Feet Dance School’ at the 2006 ‘Richmond Dance Festival,’ where he was spotted by a choreographer named Lynne Page, who was working as an assistant to the famed choreographer, Peter Darling. Because of Tom’s dance abilities, Lynne Page foresaw him being a popular entertainer in the future and took him under his wing.
Tom was cast in the role of Billy’s best buddy Michael in ‘Billy Elliot the Musical’ after auditioning eight times and receiving two years of training. He became well-known as a stage performer after his ‘West End’ debut.

On June 28, 2008, he played a major role in ‘Billy Elliot the Musical,’ and on September 8, 2008, he played the eponymous role in the same musical. Tom’s performance was lauded by critics, and he began to achieve recognition as an actor. As a result, he began to appear on a variety of TV shows and interviews.
Following his performance as Billy Elliot in ‘Billy Elliot the Musical,’ Tom made his television debut. ‘Channel 5’ interviewed him and his co-star Tanner Pflueger for one of their news segments. Tom was cast in the show ‘The Feel Good Factor’ the following year. Tom performed the popular ‘Angry Dance’ from the musical during the show’s debut, and was afterwards interviewed by Myleene Klass, who had hosted the event.
On March 8, 2010, Tom and other actors who played Billy Elliot were welcomed to 10 Downing Street to celebrate the musical’s fifth anniversary. He had the opportunity to meet Gordon Brown, the then-Prime Minister of the United Kingdom, while he was there. On March 31, a special fifth-anniversary performance of the musical was performed, and Tom was cast in the lead role.

Tom made his film debut in 2011 when he contributed his voice as Sho in the English adaptation of the popular Japanese animated fantasy film ‘Arrietty.’ In the year 2012, he made a huge breakthrough when he was cast with Ewan McGregor and Naomi Watts in the critically acclaimed catastrophe drama film ‘The Impossible.’
The film ‘The Impossible’ went on to become a hit and was shown at the ‘Toronto International Film Festival.’ Tom, who played Lucas Bennett in the film, has been hailed for his acting abilities, with many predicting that he will win an Oscar for his role. He did not win an Academy Award, but he did receive numerous other important honors and nominations.
In 2013, he starred in the speculative drama film ‘How I Live Now,’ as well as in the short film ‘Moments.’ The following year, he contributed his voice to the British-American drama picture ‘Locke,’ starring Tom Hardy. In addition, he made a cameo appearance in the film adaptation of ‘Billy Elliot the Musical.’
In the adventure drama film ‘In the Heart of the Sea,’ he played a younger version of Thomas Nickerson in 2015. In the same year, he starred in the British television series ‘Wolf Hall’ as Gregory Cromwell.
Tom had a fantastic year in 2016, appearing in four blockbuster films: ‘Captain America: Civil War,’ ‘The Lost City of Z,’ ‘A Monster Calls,’ and ‘Edge of Winter,’ among others. He played Peter Parker in ‘Captain America,’ which is one of the most popular recurring cinematic roles in Hollywood history.
In the 2017 film ‘Spider-Man: Homecoming,’ he reprised his role as Peter Parker. ‘Pilgrimage’ and ‘The Current War’ were two more films in which he appeared. He represented the famous American industrialist Samuel Insull in ‘The Current War,’ while playing Brother Diarmuid in ‘Pilgrimage.’ He also appeared as himself in the popular reality competition TV series ‘Lip Sync Battle’ in the same year. In the Marvel Studios blockbuster film ‘Avengers: Infinity War,’ Peter reprised his role as Spider-Man for the second time. Tom is set to star in a number of future flicks. Tom claims his ultimate goal is to become a Hollywood director, despite the fact that he is improving as an actor.

Tom Holland starred in the Netflix film The Devil All the Time, which was released in 2020.

Tom Holland has provided voiceovers for a number of well-known video games. In 2016, he voiced a character in the video game ‘Lego Marvel Avengers.’ He subsequently went on to do the same in ‘Spider-Man: Homecoming’ and ‘Lego Marvel Super Heroes 2,’ among other video games.
He starred in and directed the short film ‘Tweet,’ which he also directed. Tom Holland aspires to be a director in the not-too-distant future. For the time being, he wants to continue undertaking tough and unusual acting parts, which he has been doing for quite some time.

For his first acting performance in a film, Tom Holland received numerous honors and nominations. He has earned a total of nine important prizes for his outstanding portrayal as a 12-year-old Lucas Bennett in ‘The Impossible.’
He won the ‘Spotlight Award,’ ‘Best Youth Performance,’ ‘Breakthrough Performance – Male,’ ‘Young British Performer of the Year,’ ‘Best Male Newcomer,’ and ‘Best Performance in a Feature Film,’ among other prizes for ‘The Impossible.’
He earned the ‘Golden Schmoes Awards’ for ‘Breakthrough Performance of the Year’ in 2016 for his role in ‘Captain America: Civil War.’ He received the coveted ‘British Academy Film Awards’ ‘Rising Star Award’ in 2017. (BAFTA).
For ‘Captain America: Civil War,’ he won ‘Best Performance by a Younger Actor’ at the 2017 ‘Saturn Awards.’ For his part in ‘Spider-Man: Homecoming,’ he received ‘Choice Summer Movie Actor’ at the renowned ‘Teen Choice Awards’ in the same year.

Tom Holland has a close relationship with his father and siblings. He sponsors a non-profit organization named ‘The Brothers Trust,’ which raises money for philanthropic causes with his siblings. Tom does gymnastics in addition to dance. In his spare time, he enjoys watching his favorite football team, Arsenal F.C. Tessa, his favourite dog, lives with him in London. In the year 2020, Tom Holland began dating TV actress Nadia Parkes.

Tom Holland has a net worth of $18 million.