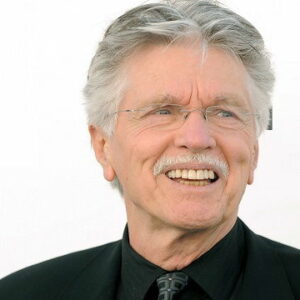 American actor Ton Skerritt, who has starred in more than 40 movies and 200 TV shows, is well-known. He is well renowned for his attractive, outdoorsy, rough appearance, which has grown more mature with age. He is therefore perfectly qualified to portray a soldier, a sheriff, or a father. During his formative years, he served for four years in the American Air Force, which undoubtedly aided him professionally. He plays villains in several of his performances. His big break came in the American satirical war movie “MASH,” which was followed by the movie “Harold and Maude,” after he made his acting debut in the movie “War Hunt.” He made his small-screen debut in the ‘Combat’ episode of the ‘ABC’ series as a soldier. He received an “Emmy Award” for “Outstanding Lead Actor in a Drama Series” for his performance as “Sheriff Jimmy Brock” in “Picket Fences” and the “National Board of Review of Motion Pictures” award for “Best Supporting Actor” for his work in “The Turning Point.” When Skerritt was still quite young, he wed Charlotte Shanks, and the two eventually had three children. But after a divorce from his first wife, he eventually wed Sue Oran and had a son with her. His third marriage, which is the one he is currently married to, also ended in divorce.

Helen and Roy Skerritt welcomed Thomas Roy Skerritt into the world on August 25, 1933, in Detroit, Michigan, the United States. His mother was a housewife and his father was a businessman. He had two older siblings: one sister and one brother.

After completing his education at “Mackenzie High School,” he went on to study at “Wayne State University” and “University of California, Los Angeles” (UCLA). He joined the “United States Air Force,” where he served for four years and was first spotted in a university production of “The Rainmaker.” He then decided to pursue acting as a career.

The career of Tom Skerritt

In the 1962 Denis Sanders picture “War Hunt,” starring Robert Redford as “Sergeant Stan Showalter,” he made his big-screen debut. He was able to land a part in the 1970 American black-comedy war movie “MASH” thanks to his military experience. The movie was an immediate success. His appearance in “Harold and Maude” in 1971 came right after this.

He portrayed “Detective Bert Kling” in the action comedy “Fuzz,” which was directed by Richard A. Colla, in 1972. After a brief absence, he returned to the film industry in 1974 with four films, including “Big Bad Mama” and “The Night Stalker.”

In the drama “The Turning Point,” which was nominated for eleven “Academy Awards,” including “Best Picture” in 1977, he portrayed the important character of “Wayne Rodgers.” In the part of “Captain Dallas,” the lone human crew member of a spaceship, he displayed his versatility in the science fiction horror film “Alien” from 1979.

He acted in a number of well-known movies during the 1980s, such as “Silence of the North” and “Maid to Order,” and he co-starred with Tom Cruise and Kelly McGillis in the 1986 romantic military action-drama “Top Gun.”

Alongside Sara Gilbert and Drew Barrymore, he played “Darryl Cooper” in the thriller-drama “Poison Ivy,” which was directed by Katt Shea, in 1992. The same year, Robert Redford directed him in the coming-of-age drama “A River Runs Through It.”

His longest-running radio and television program was the Norman Macdonnell–directed Western drama “Gunsmoke,” which aired from 1965 to 1972. He also made an appearance in “The F.B.I.” around this time (1966–1972).

Throughout his career, he has played a range of roles and made various guest appearances. In 2014, he played the roles of “James Paisley” in “The Good Wife” and “Patrick McCord” in “Madam Secretary,” two of his most recent TV roles (2015).

Skerritt has also been on stage a few times, most notably in the 1990 production of “Love Letters” with Lee Remick and the 2004 production of “Our Town” in Seattle.

In addition to working in front of the camera, he has also directed a few TV series, notably the birth control-related “ABC Afterschool Special” episode “A Question About Sex.” He also acted in some of the episodes he directed of the acclaimed television series “Picket Fences.”

His work in “The Turning Point” earned him the title of “Best Supporting Actor” at the 1977 “National Board of Review of Motion Pictures.”

For his performance as “Sheriff Jimmy Brock” in “Picket Fences,” he won an “Emmy Award” for “Outstanding Lead Actor in a Drama Series” in 1993.

For his work in “Alien,” he received the “Best Audio Commentary” prize at the “DVD Exclusive Awards” in 2003.

For his portrayal in “Leverage,” he won the 2011 Saturn Award for “Best Guest Performer on Television.”

Along with the actors and crew, he also shared a “Western Heritage Award” for “Best Television Feature Film” for his work in “Two for Texas.”

In 1957, Skerritt wed Charlotte Shanks, and together they had three kids: Andy, Erin, and Matt. In 1972, the couple got a divorce. He wed Sue Oran, a guesthouse and breakfast proprietor, in 1977. Colin was their son. However, the marriage disintegrated in 1992. He later met Julie Tokashiki, his present spouse, and they wed for the third time in 1998. He splits his time between his home on Lopez Island, which is a part of the San Luan Islands, and his home near Lake Washington, where the couple has an adopted daughter.

Tom Skerritt is a prolific American actor who has a net worth of $8 million. Born in Detroit, Michigan, Tom Skerritt graduated from the University of California-Los Angeles, and began his professional career with a role in the 1962 film, “War Hunt”. That same year, he also made his television debut on the series, “Combat”. He would return to the show multiple times throughout its five-year run. Since then, he has rarely been without work, going back and forth between film and television projects. He has appeared in such films as, “MASH”, “Fuzz”, “The Devil’s Rain”, “The Turning Point”, “Ice Castles”, “Top Gun”, “The Dead Zone”, “Steel Magnolias”, “A River Runs Through It”, “Texas Rangers”, and “Whiteout”. He has appeared on such television shows as, “The Virginian”, “Twelve O’Clock High”, “The Fugitive”, “Gunsmoke”, “Cannon”, “SWAT”, “Cheers”, “Huff”, “Leverage”, and “White Collar”. He is most widely recognized for his work on, “Picket Fences” and “Brothers and Sisters”.

He is one of the co-founders of a film program in Seattle that trains students for careers in screenwriting and filmmaking. At the institute, he also attends classes.