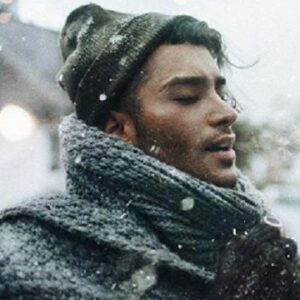 German artist, model, social media sensation, and photographer Toni Mahfud is most recognized for his several social media profiles that showcase his artistic endeavors. He began sketching and drawing at the age of 4, and after first creating pictures of his favorite cartoon characters, he later began creating accurate images of his favorite celebrities. He first gained notoriety in 2011, and when his posts began going viral, his renown gradually began to transcend national boundaries. He currently has more than 3 million Instagram followers, 1 million Facebook friends, and roughly 133k subscribers to his own YouTube channel. He has modeled for well-known companies like Tommy Hilfiger and Gillette. He is also a model. As he continues to get daily subscriptions in the hundreds, his YouTube channel is expanding quickly. The main factor in his YouTube channel’s phenomenal success is his speed watercolors and doodles. The figures from the film Maleficent and Channing Tatum are included in some of his most well-known paintings.

In Hamburg, Germany, on December 2, 1994, Toni Mahfud was born into a family who valued the arts. He had a lifelong passion for making art, and although never received any formal training in the field, he was skilled at sketching.

When he was just 4 years old, his artistic inclinations inspired him to sketch out the designs of his favorite anime characters on white paper. He did well in school and succeeded academically, so pursuing an art career never really seemed like a realistic long-term ambition for him.

He continued to doodle until he was a teenager, which is when he learned that art was always around him and that he should thus focus more on honing his artistic abilities.

Fame and a Career in Social Media

Around 2011, when he was getting ready to graduate from high school and social media was becoming popular among young people, he began posting his artworks there for all to see and enjoy. He began amassing supporters on social media, and by the time he graduated from high school, he was already a well-known figure in his own Germany.

He was making waves on Facebook thanks to his online notoriety, where he posted his sketches and amassed thousands of fans. This continued up until he opened accounts on Instagram and Twitter. He started publishing his own photos in various poses along with his artwork. His lean figure and stunning appearance helped him draw many more admirers.

Because of this, he was able to land modeling jobs with prestigious agencies like Tommy Hilfiger and was featured in many of their commercial ads. Throughout several fashion weeks in Europe, he also walked the runway for a number of distinguished designers.

His portraits of Angelina Jolie from her movie “Maleficent,” Channing Tatum, and Adele were what made him famous in Hollywood’s back alleys. Because of the widespread media coverage of this endeavor, he eventually joined the IMG modeling agency. He took part in advertising campaigns for companies including Adidas, Tigha, Nike, and G-Star Raw with them.

Additionally, he is getting offers to play leading roles in German and American movies, but nothing has been confirmed yet.

The multi-talented individual has also worked as a communicator designer, blogger, and photographer. He declares that he is a true artist and that he will do everything in his power to achieve renown as an artist.

Despite having a YouTube account since 2015, he hasn’t been extremely active there. He primarily posts films that demonstrate his quick painting abilities. There are currently a little more than 133k subscribers to his YouTube channel.

Nearly every big actor or model has more subscribers on Instagram than his account, which has approximately 3.3 million users. He publishes his own photos, doodles, and motivational and inspirational statements.

Toni is among the wealthiest Instagram stars and is among the most well-known. Our study of Toni Mahfud’s net worth from sources including Wikipedia, Forbes, and Business Insider indicates that it is roughly $1.5 million.