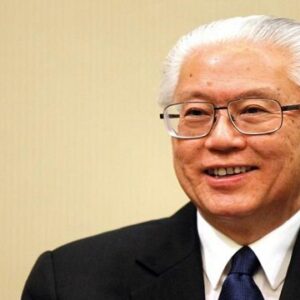 Tony Tan Keng Yam is Singapore’s seventh president. He was an excellent student and attended the University of Singapore, the Massachusetts Institute of Technology, and the University of Adelaide, where he eventually earned a doctorate in applied mathematics. While he is best known for his political career, he began his career teaching physics and mathematics at the University of Singapore and moved on to work as a banking manager at Oversea-Chinese Banking Corporation a few years later. He was elected to Singapore’s Parliament ten years later. He also joined the Singapore Cabinet, where he served in a variety of capacities, including Minister of Finance and Minister of Education. Outside of his Cabinet posts, he continued to serve as Vice Chancellor of the University of Singapore. His emphasis on education and reform has been a recurring theme throughout his career, with numerous accomplishments in standardizing Singapore’s educational system as the country grew economically prosperous. He decided to run for President in 2010 and was elected in 2011. He has advocated for societal investments and urged his constituents to participate in fundraising and volunteerism. Numerous institutions have recognized his accomplishments and leadership on numerous occasions with awards.

Tan Seng Hwee and Jessie Lim Neo Swee gave birth to Tony Tan Keng Yam on February 7, 1940 in Singapore. In Singapore, he attended St Patrick’s School and St Joseph’s Institution. He then received a scholarship to attend the University of Singapore, where he earned an undergraduate degree in physics.

He graduated from the Massachusetts Institute of Technology with a master’s degree in operations research (MIT). Following that, he earned a PhD in applied mathematics from the University of Adelaide.

After completing his undergraduate studies, he began teaching mathematics and physics at the University of Singapore in 1964.

He took a position with Oversea-Chinese Banking Corporation (OCBC) five years later and worked there for ten years.

He began his political career in 1979 as a member of parliament and was soon appointed Senior Minister of State for Education.

He made several of his most significant contributions during his tenure as Education Minister, during which he implemented numerous changes to the educational system.

He was Vice Chancellor of the University of Singapore for a year before being promoted to Minister-in-charge for another two years until 1983. He was the university’s youngest Vice Chancellor.

Tan resigned from his Cabinet position in 1991, but retained his seat in Parliament, and assumed the position of chairman and CEO of the OCBC.

He resigned from his positions in 2010 and launched his campaign for the Singapore presidency. He was elected president in 2011 and remains in office to the present day. He is Singapore’s seventh president.

Throughout his political career, he has steadfastly advocated for Singapore’s economic solvency while also promoting contingency plans in the event of an economic crisis.

His presidency is defined by his promotion of what he refers to as “social reserves,” which include volunteerism and social movements.

He was awarded the National Trades Union Congress Medal of Honour in 1988 for his efforts to elevate and preserve Singapore’s economic status during his tenure as Minister of Trade and Industry.

In 2005, he was presented with the National University of Singapore’s Eminent Alumni Award for his contributions to the university.

Most recently, in 2011, the Foreign Policy Association recognized his leadership and service with a medal.

He is married to Mary Chee Bee Kiang and the couple has four children together: three sons and one daughter.
He modernized education standards in his country by enacting significant changes to Singapore’s educational system, including the requirement that students complete ten years of primary schooling before proceeding to secondary or vocational education.

He has lent his support to a number of institutions and organizations, including his alma mater, the Singapore Dance Theatre, the Singapore Computer Society, and SJI International.

He coined the term “social reserves” to describe his efforts to foster social movements and charitable giving.

Today, it has turned into the largest fast-food company in the country with numerous chains including Jollibee, Chow King, Greenwich Pizza, and more than 2,000 stores in the Philippines and 541 overseas.

He was the University of Singapore’s youngest Vice Chancellor.
His presidential campaign logo is a pair of black glasses on a white background.