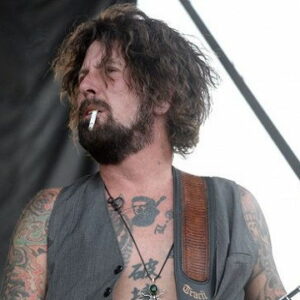 Tracii Guns is an American guitarist best known for founding the American hard rock group “L.A. Guns” in the 1980s. Along with “Contraband,” he was a founding member of the hard rock supergroup “Brides of Destruction.” In addition, he was a founding member of the Los Angeles-based American hard rock band “Guns N’ Roses.” He soon departed the group, though, and was replaced by Slash, a famed guitarist. He had always been interested in music, and at the age of six, he first heard the great Jimmy Page, a member of the English rock band “Led Zeppelin,” while riding in his mother’s car. He was influenced by Jimmy Page’s playing, and his uncle Ron Ulrich later taught him how to play the guitar. Tracii’s distinctive guitar style, which is reminiscent of early Aerosmith and Van Halen, helped him gain popularity over time. He is renowned for his work on more than 135 titles as a composer and songwriter. Tracii has so far worked on more than twenty albums during his career and has also collaborated on a number of solo projects with various musicians and bands, such as “Poison,” “Quiet Riot,” and Steven Adle, and the Italian group “J27.”

On January 20, 1966, non-observant Jewish parents gave birth to Tracii Guns in Los Angeles, California, and gave her the name Tracy Richard Irving Ulrich. The media is largely unaware of his early years and childhood.

As a young youngster, he had an interest in music. After hearing Jimmy Page’s song “Whole Lotta Love” on the radio for the first time, he was greatly influenced by the late rock band “Led Zeppelin” guitarist.

Later, his uncle taught him how to play the guitar, which stoked his innate love of music even more. He started his first band with his pals when he was twelve years old, and they used to perform around the city.

In 1983, Tracii Guns joined forces with bassist Ole Beich, singer Michael Jagosz, and drummer Rob Gardner to form his first significant band. However, before Jagosz departed the band and Axl Rose took over as the main singer, the band’s members could only record one EP, titled “Collector’s Edition No. 1.”

Similar to what happened before, another exit was shortly seen by the band. Soon after joining, Rose formed Hollywood Rose with guitarist Chris Weber and childhood buddy Izzy Stradlin. Rose departed the group shortly after.

Paul Black, the lead singer for Guns, and other musicians joined the group in 1985, including Mick Cripps on bass and Nickey “Beat” Alexander on drums. The group’s debut album, which bears their name, was released in 1988 on Vertigo Records and peaked at No. 50 on the Billboard 200. The band’s second album, “Cocked & Loaded,” was released a year later. It was even more successful than its predecessor and peaked at number 38 on the Billboard 200.

In 1991, the group released their third album, “Hollywood Vampires,” and over the following eight years, they released “Vicious Circle,” “American Hardcore,” “Shrinking Violet,” “Greatest Hits and Black Beauties,” “Cocked & Re-Loaded,” “Man in the Moon,” “Waking the Dead,” and “The Missing Piece.”

Tracii Guns departed the group in 2002 before coming back in 2005. He took another vacation later in 2013 and came back in 2016. He contributed to eleven albums in total during his time with the band.

After Axl Rose joined and subsequently left L.A. Guns to start his own band, Hollywood Rose, in 1985, Tracii and Rose made the decision to combine their two bands to create a new one with the name “Guns N’ Roses,” which was a combination of their names.

Axl Rose sang for the newly formed band, which also included Tracii Guns on lead guitar, Ole Beich on bass, Rob Gardner on drums, and longtime friend of Rose Izzy Stradlin on rhythm guitar. But within a year, Tracii quit the group along with his former L.A. Guns bandmates Ole Beich and Rob Gardner over a disagreement with Rose.

Later, Rose’s longtime bandmates Steven Adler, Duff McKagan, and famed guitarist Slash took their place. Tracii didn’t record any albums with the group, but he did write a few songs while working with them.

Tracii Guns and Nikki Sixx, a former Mötley Crüe member and co-founder, started a new band called Brides of Destruction in 2002 after taking a temporary hiatus from the L.A. Guns. Along with the Guns and Sixx, the band also included singer London LeGrand and drummer Scot Coogan.

The band’s album “Here Come the Brides” was published in 2004 and peaked at No. 92 on the Billboard 200. Later that year, when Sixx departed the group, Tracii added Scott Sorry as his replacement and Ginger as the second guitarist. The second album, “Runaway Brides,” was then being worked on by the new lineup. The 2005 album included the well-known song “Dimes in Heaven,” which was dedicated to Dimebag Darrell, the late guitarist for the band “Pantera.”

The League of Gentlemen of Tracii Guns

In 2012, Tracii Guns founded the blues-rock group “Tracii Guns’ League of Gentlemen,” which included Scott Foster Harris, a former member of L.A. Guns, John Bird, and Doni Gray. With Shrapnel Records, the band put out two albums, both of which were well-received by critics.

Additionally, Tracii Guns has performed in special collaborations with a number of different musicians. He put together a concert in California with former Guns N’ Roses guitarist Gilby Clarke. He captured the two, along with Stefan Adika on bass guitar and Eric Singer on drums, on a live album he called “99 Live.” He appeared on Gilby Clark’s fourth solo album, “Swag,” released later in 2002.

Tracii Guns has established and participated in a number of bands during the course of his successful career. But it was while he was a member of the band L.A. Guns that he advanced professionally and made a name for himself among the top musicians.

The gold-certified album “Cocked & Loaded,” which was voted No. 27 on Rolling Stone magazine’s list of the 50 Greatest Hair Metal Albums of All Time, is without a doubt one of his finest efforts.

Tracii Guns is an extremely private person who dislikes divulging information about his private life to the media. According to rumors, he is engaged to Kristen.

Guitarist Tracii Guns from the United States has a $500k net worth. Tracii Guns founded his first band, L.A. Guns, in the early 1980s. He was born in Los Angeles, California. Axl Rose, Ole Beich, and Rob Gardner made up the band’s initial lineup.