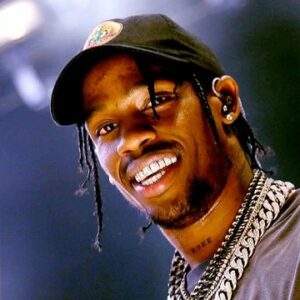 Travis Scott is a rapper, singer, and songwriter from the United States. He rose to prominence in 2012, when he secured his first major label deal with Epic Records, as Jacques Webster. He finished the year on a high note by signing a deal with Kanye West’s GOOD Music’s VERY GOOD Beats. He was featured in the label’s 2012 compilation ‘Cruel Summer’ to commemorate his association. Scott also inked a record deal with T.I.’s Grand Hustle imprint in April 2013. He made his big breakthrough on the music scene the following year with his first full-length mixtape, ‘Owl Pharaoh.’ Scott’s career as a rapper and vocalist accelerated when he released a follow-up mixtape, ‘Days Before Rodeo,’ in August 2014. However, it was the single “Antidote” from his album “Rodeo” that launched his career into the stratosphere. The song was not only a great hit, but it was also his first to reach the top 20 of the Billboard Hot 100 chart in the United States. Since then, Scott’s career has soared, and his second album, ‘Birds in the Trap Sing McKnight,’ as well as a collaboration album, ‘Huncho Jack, Jack Huncho,’ have done exceptionally well.

Travis Scott was born on April 30, 1992, in Houston, Texas, as Jacques Webster. He spent much of his childhood in Missouri City, where he lived with his grandmother. He eventually relocated to the suburbs to be closer to his father.
Before attending Elkins High School, he attended a private school. In 2007, he graduated from the same school and was accepted to the University of Texas in San Antonio. Scott, on the other hand, dropped out of college in his sophomore year to pursue a career in music. His parents became enraged and stopped financially supporting him.

Travis Scott moved to New York City after dropping out of college to pursue a career in music. He wanted to be a record producer at first, so he focused on hip hop production. He spent a lot of time in New York at the Just Blaze studio.

He teamed up with his longtime friend Chris Holloway to form the band ‘The Graduates.’ They released their first EP on the social networking platform MySpace a year later, in 2008.
In 2009, he established a band called ‘The Classmates’ with his former classmate OG Chess. The Classmates released two albums between 2009 and 2010. The first involved Buddy Rich, while the second involved Cruis’n USA. Scott focused on the production aspects of both projects. The duo stayed together until 2012, when they split up owing to financial and personal issues.

Travis Scott had a temporary low in both his career and personal life. While his music career was unremarkable, his financial difficulties left him with little options for survival. He traveled from Los Angeles to Houston and back to Los Angeles. Scott’s production ‘Lights Love Sick’ was heard by TI of Grand Hustle Record, who negotiated a deal with him.

‘Owl Pharaoh,’ Scott’s first full-length project, was a mixtape. However, whether it was fate or bad luck, the project’s release was postponed, and it was eventually re-created by Kanye West and Mike Dean. Meanwhile, Scott has released ‘Blocka La Flame,’ a remix of Pusha T’s single ‘Blocka.’

Scott released a music video for the song “Quintana” in March 2013, which was supposed to appear in “Owl Pharaoh.” Scott was a member of the XXL Freshman Class of 2013 during this period.

Travis Scott released a preview of his first commercial debut single, ‘Upper Echelon,’ at the end of March 2013. Finally, the record was delivered to Urban Contemporary Radio and made available as a free download.

Scott released his single ‘Don’t Play’ in July 2014 as a prelude to his major label debut studio album ‘Days Before Rodeo.’ The song was a huge success. Scott announced a concert tour called “The Rodeo Tour” alongside Rich Gang rapper Young Thug and producer Metro Boomin as a result of his popularity. The tour began in Santa Ana, California, on March 1, 2015, and ended in Portland, Oregon, on April 1, 2015.

Travis Scott became an overnight sensation because to his Rodeo Tour, which was a huge hit. Kanye West, Chris Brown, Wale, and Birdman made special guest appearances in different cities throughout the tour, including Denver, Colorado, Houston, Texas, Chicago, Illinois, Detroit, Michigan, New York City, Atlanta, Georgia, Philadelphia, San Diego, Los Angeles, San Francisco, California, and Seattle, Washington. It is regarded as one of the most extreme rap tours in recent memory.

Scott’s long-awaited album ‘Rodeo’ was released in September 2015. Various artists made appearances as special guests. The album was a tremendous hit, debuting at number three on the Billboard 200 chart in the United States. The number one spot on the Billboard Rap Album list was achieved by ‘Rodeo.’
‘3500’ and ‘Antidote’ were two singles from his album ‘Rodeo.’ While ‘3500’ was a hit, it was ‘Antidote’ that propelled him forward in his career. It went on to become the highest-charting single on the Billboard Hot 100, peaking at number 16 in the United States.

‘Pick Up The Phone,’ a collaboration featuring Young Thug, was released in 2016. The record was a huge hit, peaking at number 43 on the Billboard Hot 100. The Recording Industry Association of America awarded it double platinum certification (RIAA).

Scott revealed the titles of his second and third albums, ‘Birds in the Trap Sing McKnight’ and ‘AstroWorld,’ respectively, in mid-2016. On his third episode of.wav radio in September 2016, he announced the release of his second album, ‘Birds in the Trap Sing McKnight.’ He then made the record available on iTunes and Apple Music. On September 11, 2016, the album debuted at number one on the Billboard 200 in the United States. He secured an agreement with Universal Music Publishing Group the next day.

Scott performed at Champion Square in New Orleans during All-Star Weekend in February 2017. He also performed at the BUKU Music + Art Project festival in New Orleans a month later, in March. At the same time, he announced his next performance tour, ‘Birds Eye View,’ which included stops in New Orleans, Louisiana, and Eugene, Oregon. The tour’s European leg started on June 23 and ended on July 9.

In addition to working on his third album, he appeared on the tune ‘Portland’ from Canadian rapper Drake’s project ‘More Life.’ The song reached number 9 on the Billboard Hot 100 in the United States, making it his highest-charting song as a featured artist. He began working on a collaboration album with Atlanta rapper Quavo of Migos during this time.

Scott released three new songs on SoundCloud in May 2017, including ‘A Man,’ ‘Green & Purple,’ and ‘Butterfly Effect,’ which featured Playboi Carti. He followed it up with a ‘DAMN.Tour’ and a performance on their single ‘Walk On Water’ at the 2017 MTV Video Music Awards.

Scott was featured on Trippie Redd’s single “Dark Knight Dummo” at the end of 2017. On the Billboard Hot 100, it reached number 72. ‘Huncho Jack, Jack Huncho,’ his joint effort with Quavo, was released a week later. The album opened at number three on the Billboard 200, with seven tracks charting on the Hot 100.

Travis Scott’s most well-known work was his debut album ‘Rodeo,’ which included the track ‘Antidote.’ While ‘Rodeo’ debuted at number three on the US Billboard 200 list and number one on the Billboard Rap Album chart, its lead song, ‘Antidote,’ became his highest-charting single on the US Billboard Hot 100 chart, peaking at number sixteen. It was his first gold record. Scott’s second album, ‘Birds in the Trap Sing McKnight,’ was a smash hit, reaffirming his status as a rapper and singer. He was able to sign a publishing deal with Universal Music Publishing Group thanks to the album.

Travis Scott and Kylie Jenner have been dating since April 2017. Jenner was rumored to be pregnant with the couple’s first child in September. Stormi, the couple’s daughter, was born in February 2018.

Travis Scott has a net worth of $60 million as an American rapper, singer, songwriter, and record producer. He is one of the most well-known and well-paid rappers in the world. His bond with Kylie Jenner is also noteworthy. Travis may easily generate $40 – $60 million from his multiple endeavors in a touring year.