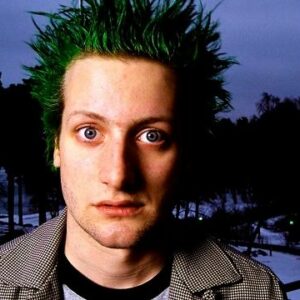 Frank Edwin Wright III, better known by his stage name Tré Cool, is an American drummer who is a member of the popular punk band ‘Green Day.’ He not only plays the drums for the band, but he also plays guitar, keyboard, and provides backup vocals. Cool began his musical career at a young age, and being a neighbor of ‘The Lookouts’ lead vocalist Larry Livermore only aided him in reaching his artistic goals. He began playing drums for ‘The Lookouts’ when he was only 12 years old, but as he grew older and acquired recognition for his abilities, he was offered the position of drummer for ‘Green Day’ after their former drummer quit. Cool was more into playing freestyle, happy beats before joining ‘Green Day,’ but to fit in with the band’s concept, he had to embrace a more communal approach—not just playing the instrument, but actually playing the song. Cool has been recognized by ‘Drummers! Magazine’ as ‘one of the best drum players of our time.’

Cool was born in Frankfurt, Germany, on December 9, 1972. During the Vietnam War, his father was a helicopter pilot. He relocated to Willits, California, with his father and sister, Lori, and became neighbors with Larry Livermore of the punk band ‘The Lookouts.’ Cool was employed as the drummer of Livermore’s band ‘The Lookouts’ when he was 12 years old, and it was during this time that he adopted the moniker ‘Tré Cool’—’Tré’ means’very’ in French.

Cool was still in high school when he received an invitation from ‘Green Day’ to fill in for their drummer, Kiffmeyer, who had departed the band. In his sophomore year, he dropped out and began taking classes at a local community college.

He was named ‘Best Punk Drummer’ in Drum! Magazine’s 2011 Drummies in 2011. Across all musical genres, he was regarded with some of the best drummers from around the world. ‘Green Day’ issued the album ‘Tre!’ in 2012 to recognize Cool’s contributions and talent, and one of the songs on the album ‘Uno!’—’Fell For You’—was initially named ‘Fell for Snoo,’ with ‘Snoo’ being his nickname.

Cool was honored with many other renowned drummers from all over the world, across music genres, in 2011 when he received the Drum! Magazine’s ‘Best Punk Drummer’ category. Cool was originally noticed by ‘The Lookouts’ lead vocalist Larry Livermore, who invited him to join his band, but it wasn’t until the 1990s that his talent was properly recognized with his inclusion in ‘Green Day.’

In 1995, Cool married Lisea Lyons and gave birth to a daughter, Ramona Isabel. Back then, he was the first member of Green Day to become a father. In 1996, he and Lisea Lyons divorced. In the year 2000, he married Claudia for the second time and welcomed Frankito into his family. In 2003, the couple divorced.

Billie Joe Armstrong’s two children, Jakob and Joseph, are grandfathered by Cool. Frankito, Cool’s son, has Armstrong as his godfather. They spent the summer of 2013 in Newport Beach with their kids, touring with them for ‘Green Day,’ and taking photos to post on the band’s Facebook page.

Cool famously balanced the Universal Globe at Universal Studios in 1998, when ‘Green Day’ won a ‘Moon Man’ Trophy at the MTV Music Awards, but got away with it without punishment, and was rather congratulated on. He is the only individual who has ever been able to do so.

Cool’s father was supportive of his musical endeavors, even restoring a bookmobile to transport the band. As he previously stated, “I watched them grow from a bunch of kids to a hardworking band of musicians… They used to practice a lot of the songs they did on Dookie in my living room. You can hear things coming together, but you’re not expecting people to rush out and buy it. But when it happens, all you can say is, “Wow, that’s really cool.””
Ramona Isabel, his daughter, is named after his idol, Joey Ramone.

Tre Cool has a net worth of $55 million as an American rock musician and producer. Tré Cool is most known for being the drummer for Green Day. He replaced veteran drummer John Kiffmeyer in the band in 1990. Cool has also performed with Samiam, Foxboro Hot Tubs, Bubu and the Brood, and the Lookouts, in addition to Green Day.