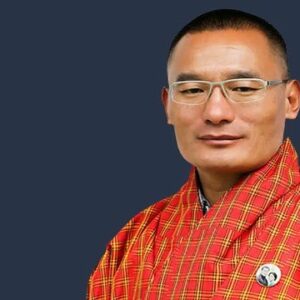 Since July 27, 2013, Tshering Tobgay, a politician from Bhutan, has served as the country’s prime minister. He is the founder and leader of the “People’s Democratic Party,” which he effectively established as the country of Bhutan’s first officially recognized political party. He served as “Leader of the Opposition” in the “National Assembly,” Bhutan’s first democratically elected parliament, for five years, from March 2008 to April 2013. Additionally, he presided over the “People’s Democratic Party.” He graduated from both the University of Pittsburgh and Harvard University. He worked as a government servant in the “Department of Education”Technical “‘s and Vocational Education Section” before entering politics. In 1998, he established and oversaw the “National Technical Training Authority.” Since 2003, he has served as the director of the “Ministry of Labour and Human Resources” for around four years. On December 17, 2014, during the 107th National Day ceremony, His Majesty, the King presented him with the “Lungmar Scarf,” a lifelong scarf. As a result, he was the first person to receive the scarf after its restoration.

Tshering Tobgay was born in Haa, Bhutan, on September 19, 1965. Among his parents’ six boys, he is the oldest. His mother assisted in building the first road connecting Bhutan with India, while his father served in the Bhutan Army.
In the Indian hill town of Kalimpong, he received his secondary education at “Dr. Graham’s Homes” school.
After receiving a scholarship from the United Nations, he enrolled at the Swanson School of Engineering at the University of Pittsburgh in 1987. He earned his Bachelor of Science in Engineering (Mechanical) in 1990.
Additionally, he participated in a number of brief seminars, workshops, and courses, including “Project Monitoring and Evaluation” in England, “Improving Quality of Vocational Training” in South Korea, and “Strategic Planning” from India.

He enrolled in the John F. Kennedy School of Government at Harvard University in the meantime, and in 2004 he graduated with a master’s degree in public administration from there.
He left the “Ministry of Labour and Employment” on February 1st, 2007, to start a new political career as His Majesty worked to bring democracy to Bhutan.

He continued to serve as the “Leader of Opposition” in Bhutan’s “National Assembly” from April 21, 2008, to April 20, 2013. During this time, he also served as the “People’s Democratic Party’s” president.

He promised to provide every district with utility vehicles and a power tiller for every hamlet during the 2013 election campaign, instead of emphasizing “Gross National Happiness” like his predecessors had done. He thinks that rather than focusing on “Gross National Happiness,” attention should be given to serious concerns including youth employment, national debt, and corruption.

Tobgay was chosen as Bhutan’s Prime Minister in a secret vote after the 2013 election. He has been Bhutan’s prime minister since July 27, 2013.

Tobgay is working to cut back on corruption in the Bhutanese government. He frequently engages with regular Bhutanese.

The lifelong scarf, also known as the “Lungmar Scarf,” was given for the first time to Tshering Tobgay after its reinstatement. He received this honor from His Majesty in recognition of the services he made from 2008 to 2012 as an opposition leader to the nation’s political processes. On December 17, 2014, during the 107th National Day celebration, he was presented with the honor.

He wed Tashi Doma in 1998, and the couple has two children together. Along with enjoying outdoor pursuits like biking, hiking, jogging, and archery, he also enjoys reading, music, and theater. He also appreciates volunteering.
On social media sites like Facebook and Twitter, Tobgay is quite active. He is a frequent blogger as well.

The estimated net worth of Tshering Tobgay is about $1 million.