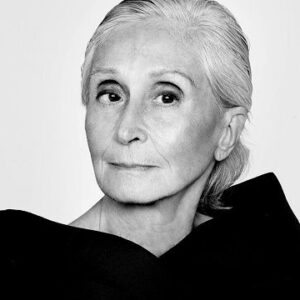 Twyla Tharp is a dancer and choreographer best known for inventing new and unique dance styles. From an early age, she was a graceful and inquisitive child who was exposed to music and dance at the age of eighteen months. Her mother, a piano teacher, had lofty ambitions for her children and enrolled Twyla in lessons as soon as she was old enough to learn. Her parents ran a neighborhood drive-in theater, and her early exposure to the glitz and glamour of show business ensured that she grew into a confident young woman. She received dance instruction as a young girl, but also learned to play several musical instruments, including the violin, piano, and drums. Her hectic childhood schedule prepared her for the exciting career as a dancer and choreographer that she eventually pursued. She began her career with the Paul Taylor Dance Company before establishing her own company, Twyla Tharp Dance, a few years later. With her eccentric sense of humor and avant-garde style, she carved out a niche for herself and became one of choreography’s most recognizable faces in America.

She was born Lucille Tharp’s eldest daughter on July 1, 1941. She is the younger sister of one and the brother of two.
Twyla’s mother was a piano teacher who began teaching her music when she was eighteen months old. Her mother had lofty ambitions for her daughter and made certain she learned to play the violin and drums as well. Additionally, she received instruction in German and French.

Her parents owned a drive-in theater, where she worked from the age of eight.

She was an eager student who took dance lessons in a variety of styles and studied at the Vera Lynn School of Dance with the Mraz sisters. Along with her passion for music and dance, she enjoyed reading in her spare time.

She began her academic career at Pomona College in California before transferring to Barnard College in New York City during her sophomore year. In 1963, she earned a bachelor’s degree in art history.

In New York, she studied ballet at the American Ballet Theater with Igor Schwezoff, as well as with Richard Thomas, Martha Graham, and Merce Cunningham.

Tharp joined the Paul Taylor Dance Company in 1963. By then married to Peter Young, she made her professional debut as Twyla Young.

In 1965, she choreographed her first dance, ‘Tank Dive,’ which was presented at Hunter College. Her passion for dance inspired her to found Twyla Tharp Dance in 1966.

In 1970, she choreographed a piece titled ‘The Fugue’ that exemplified her inventiveness and creativity. She installed microphones on the floor and the four performers danced to the percussive beats created by their own feet on the floor.

She also dabbled in television during the 1970s, producing her first television program for the Public Broadcasting Service (PBS) series ‘Dance in America’ in 1976.

Her meteoric success resurrected the Twyla Tharp Dance Company, which embarked on a world tour in 1999 that became wildly popular and lasted until 2003.

She opened a show, ‘The Times They Are A-Changin’, in 2005 at San Diego’s Old Globe Theatre to Bob Dylan’s music. As of March 2006, the show held the records for highest grossing show and highest ticket sales.

She was the 1985 Primetime Emmy Award winner for Outstanding Choreography for Baryshnikov by Tharp With American Ballet Theatre.

Twyla Tharp and Jennifer Tipton won the Laurence Olivier Award for Outstanding Achievement in Dance in 1991 for their production of ‘In the Upper Room.’

In 1993, she was elected to the Academy of Achievement.

In 2003, she won the Tony Award for Choreography for her work on the musical ‘Movin’ Out.’

She met Peter Young at Pomona College, who later became a painter. In 1962, the couple married. However, this marriage did not last long and ended in divorce.

She later married artist Bob Huot. Jesse, the couple’s only child, was born in 1971. This marriage, like the previous one, ended in divorce.

Twyla is one of the wealthiest dancers and is ranked as one of the most popular dancers. Twyla Tharp’s net worth is estimated to be around $1.5 million, based on our analysis of Wikipedia, Forbes, and Business Insider.