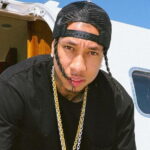 Tyga is the stage name of Micheal Ray Nguyen-Stevenson, a well-known American rapper. Tyga was born to Vietnamese-Jamaican parents and grew up in a low-income neighborhood with a lot of street activity. His cousin exposed him to rap music, which had a huge influence on him and inspired him to pursue music as a career. The origin of his nick name ‘Tyga’ is a subject of debate. He rose to prominence as a result of his music albums and mixtapes, which he produced in partnership with other industry heavyweights. His music videos are noted for their graphic imagery and thought-provoking lyrics. In addition, he has produced and acted in a few pornographic films. While he has received a ‘Grammy’ nomination and a ‘MuchMusic Video Award,’ he has also experienced legal troubles. His personal life has been tumultuous as well, with a succession of romances and a kid from a previous marriage. His fourth album had issues being released after three successful albums. He did, however, manage to get it released and follow it up with subsequent albums. He has a large number of friends in the American rap scene, as well as a large number of social media followers.

Tyga was born in Compton, California, on November 19, 1989. His Vietnamese and Jamaican parents raised him in Compton until he was 11 years old, when they moved to Gardena, California.

His nickname ‘Tyga’ is supposed to have come from his mother, who used to call him Tiger Woods. ‘Thank You God Always,’ it also means. He claims to have grown up in Compton’s low-income neighborhood, however there is film of his parents driving nice cars and living a wealthy lifestyle. Tyga has made fun of his upbringing in the past.

Travie McCoy, Tyga’s cousin, was a member of ‘Gym Class Heroes,’ and he was the one who introduced him to music and rap. Fabolous, Eminem, Cam’ron, and other rappers impacted him. He began competing in local rap competitions with his classmates. They also became well-known after posting songs they had written on online chat groups.

Tyga signed a record deal with Lil Wayne’s ‘Young Money Entertainment’ after the success of his debut mixtape ‘Young On Probation.’ His breakthrough single was the song “Deuces,” which he sang alongside Chris Brown and Kevin McCall. The song peaked at number 14 on the Billboard Hot 100 and first on the Billboard Hot R&B/Hip Hop Songs chart. The song was nominated for a Grammy for ‘Best Rap / Sung Collaboration.’ He traveled with ‘Gym Class Heroes’ and published his first independent album, ‘No Introduction,’ in 2008, on Decaydance Records, thanks to his cousin McCoy. ‘Diamond Life,’ one of his songs, was featured in the film ‘Fighting.’ It was also featured in video games like ‘Need for Speed: Undercover’ and ‘Madden NFL 2009,’ among others. He released a number of mixtapes and singles before releasing his debut studio album, which kept him in the public eye. By that time, he’d made a name for himself and was recording for labels like ‘Young Money Entertainment,’ ‘Cash Money Records,’ and ‘Republic Records.’

He collaborated with prominent stars like Rick Ross, Chris Brown, and Bow Wow to create an impression in the music business after his initial success with ‘Money Entertainment.’ To begin a new chapter in his music career, he signed with Kanye West’s ‘Good Music Imprint.’ With the release of his ‘Young Money’ debut album ‘Careless World: Rise of the Last King’ in 2012, Tyga’s approach evolved. Before the CD was released, a fragment of Martin Luther King Jr.’s “I’ve Been to the Mountaintop” speech had to be removed. T-Pain, Pharrell, Nas, Robin Thicke, and J Cole were among the guest musicians on the album, which charted at number four on the US Billboard Top 200.

‘Hotel California,’ his third album, was released in April 2013. The album was panned by critics, with one calling it “the least inventive major label rap album in recent memory.” Tyga’s album ‘The Gold Album: 18th Dynasty,’ as well as his duet with Justin Bieber, had to be put on hold owing to a feud with ‘Young Money.’

Tyga was signed to ‘Good Music,’ under the jurisdiction of ‘Def Jam Recordings,’ by Kanye West, the brother-in-law of his then-girlfriend Kylie Jenner, in September 2016. Some considered this as Tyga’s lone chance to redeem himself in the music industry.

In July 2017, he released his fifth studio album, ‘BitchImTheShit2,’ under the ‘Good Music’ label, which did poorly on the ‘Billboard’ charts. He followed it up with his sixth album, ‘Kyoto,’ which featured 24hrs, Gucci Mane, and Tory Lanez among its guests.

Critics were harsh in their assessments of ‘Kyoto.’ It also failed to impress music fans, resulting in Tyga’s embarrassment. In 2018, he released his next single, ‘Taste,’ in an attempt to resurrect his career. The tune, which features Offset, was an instant hit. It was certified 6x platinum by the Recording Industry Association of America (RIAA) and helped him relaunch his career. He then released his following single, ‘Swish,’ which was certified Gold. In 2019, he released ‘Legendary,’ his seventh studio album, which charted at No. 17 on the ‘US Billboard 200.’

‘Careless World: Rise of the Last King,’ his major label debut, has hit singles like ‘Rack City,’ ‘Faded,’ ‘Far Away,’ ‘Still Got It,’ and ‘Make It Nasty.’ ‘No Introduction,’ ‘Hotel California,’ and ‘Fan of a Fan: The Album’ are some of his other albums. Chris Brown collaborated on the album ‘Fan of a Fan.’

In 2012, Tyga received the ‘MuchMusic Video Award’ for his song ‘The Motto’ in the ‘MuchVIBE Hip-Hop Video of the Year’ category.

Tyga has had several relationships. In 2006, he had his first romance with Kiely Williams, and in 2009, he had a brief relationship with Chanel Iman. In 2010, he married Jordan Craig for a short time.

Tyga and Blac Chyna have a baby named King Cairo Stevenson, who made an appearance in his video “Rack City.” The pair got engaged and moved to a mansion in Calabasas, California, after Cairo was born in October 2012. The relationship, however, terminated in 2014.

He began dating reality sensation Kylie Jenner in 2014. Their on-again, off-again romance deteriorated and ended in 2017, owing to a significant age gap between them. When they began dating, Kylie was 16 years old and he was in his mid-twenties.

Jordan Ozuna, a model, was also seen with him. They never confirmed their relationship, though.

When he’s furious, he’s known for lashing out at others. On social media, he slammed ‘Young Money Entertainment’ for keeping his record hostage. In an interview, he labelled musician Drake a phony and stated unequivocally that he despises Nicki Minaj.

Tyga has a net worth of $5 million.

Tyga was robbed of his diamond-encrusted gold chain, which was later sold to rapper 40 Glocc. He claimed, however, that Glocc played no part in the crime and that they remained friends.