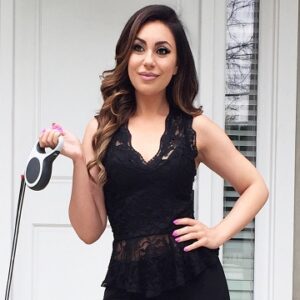 Uldouz Wallace, also known by her first name Uldouz, is an Iranian actor, comedian, and improv artist whose hilarious social media videos have gone viral. Uldouz rose through the ranks of YouTube’s comic big leagues after a humble starting on the short video platform Vine. Her sense of humor is impeccable, and her videos never fail to entertain. Her content is full of wit, and she uses her videos to challenge preconceptions. She takes us through her gorgeous day-to-day existence on social media and occasionally makes us ROFL with humorous videos. Uldoz attributes a large part of her success to her fans’ unwavering support on social media and in person, to whom she is eternally grateful. Apart from comedy, she enjoys dabbling in other forms of entertainment such as acting, modeling, and fashion inspiration.

Uldouz Wallace began her career as an Internet Marketer before becoming famous. She developed an interest in modeling and acting during her profession as a marketer, and she has been on the covers of several reputable publications, including ‘Show,’ ‘Maxim,’ and ‘Dub.’ She has also appeared in various music videos as a dancer.

Uldouz eventually got her footing in social media when she launched her Vine channel, where she received rapid acclaim for her hilarious and entertaining material, soon amassing tens of thousands of followers. She went on to launch her own YouTube channel, which quickly propelled her to social media fame. She also has a large number of followers on Instagram. John Singleton, an American director and producer, observed Uldoz’s charisma, talent, and ease in front of the camera and encouraged her to try her hand at acting.

Her own content was used to produce the show ‘Living an Uldouz Life,’ which made her a household name in the West. The concert was well-received by the public, and her talent was recognized by well-known performers such as Will Ferrell. Her acting career got off to a wonderful start, and she went on to star in other films alongside big-name actors. She has appeared in films such as ‘Good Luck Chuck,’ ‘Guardian Angel,’ and ‘Sister Code.’ She has appeared in television shows such as ‘Smallville,’ ‘The L Word,’ and ‘Men in Trees.’

Uldouz is a stunning, intelligent, joyful, and self-assured woman who has worked hard to attain her goals. As evidenced by the amazing photos she posts on her Instagram account, she is also a part-time model. Her large social media following can be linked to the fact that she is the quintessential definition of the expression “Beauty with Brains.” Her charm, humor, attractiveness, and sophistication keep her old admirers enthralled while also attracting new fans from all over the world.

Uldouz is not only a stunning model, actor, and entertainer, but also a brilliant businesswoman with degrees in marketing, advertising, and business administration, as well as acting. She has also learned and is fluent in various European languages, including Swedish, French, and English. Uldouz’s attitude and journey continue to inspire and attract fans from all over the world, both men and women. Her popularity is also due to her innovative and funny personality, which distinguishes her as a true artist.

Uldouz was born on November 11, 1981, in Tehran, Iran, to Iranian parents. Her family moved to Uppsala, Sweden, when she was five years old, and then to Stockholm when she was nine. Uldouz majored in Marketing at Stockholm University after completing her secondary schooling.

She then enrolled at Greystone College to earn her Business Administration degree. She continued her study at San Diego State University, where she earned a bachelor’s degree in marketing and advertising. Uldouz has worked for reputable companies such as City Boxing, Sycuan Casino, and Advanced Body Solutions as an Internet Marketer.

She rose through the ranks at Richard Lawson Studios to become the CEO, where she is still employed. Uldouz is not in a relationship right now, and the 35-year-old has been single for quite some time. Despite her Hollywood success and relocation to the west, she has stayed close to her roots and continues to improve her Persian language skills.

She has never been associated to any of her co-stars or other celebrities, and she continues to keep her personal life and family secrets to herself.

Uldouz Wallace’s net worth is estimated to be $1-5 million at the age of 37, according to Wikipedia, Forbes, IMDb, and other online sources. She made a living as a professional movie actress. She is an Iranian woman.