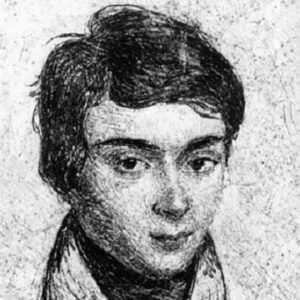 Evariste Galois was a famous mathematician who lived during the Renaissance. The brilliant mathematician died at an early age after a tragic yet inspiring life. He established the foundations of group theory and continued to work on abstract algebra, breaking countless norms to solve a 350-year-old problem involving polynomials. He is known around the world as the “Pioneer of Modern Algebra.” He possessed immense calibre and formidable intelligence, and it is truly tragic that he died in a duel at the age of 20. His work was often met with hostility and was never acclaimed until after his death. He was known as a hopeless romantic with a republican political background. Some saw him as merely a political activist, and many of his caregivers and instructors were baffled by his mental sharpness and found many of his views unintelligible. Nonetheless, he persisted, proving the possibility of solving general quintic equations and polynomial problems of greater degree with tenacity. In the discipline of mathematics, his skill of investigation and logical reasoning has solidified his place.

Evariste Galois was born on October 25, 1811, in Bourg-la-Reine, French Empire, to Nicolas-Gabriel Galois and Adélade-Marie Galois. Both of his parents had received a good education and believed in liberal revolutionary values.
His father was a pleasant and philosophical man who oversaw a school with roughly sixty boarders. He went on to become the mayor of Bourg-la-Reine.

Adelade-Marie, his mother, came from a family of lawyers and had a more traditional education; she knew Latin and Classical Literature. She had a strong personality and was unconventional, and many people thought she was queer. Galois has a brother named Alfred and a sister named Nathalie-Théodore.
His primary education was handled by his mother. She tried to instill in him the ideas of an austere faith, as well as parts of classical culture and literature.

She educated him at home until he was twelve years old. Despite her reluctance to send him to school, she enrolled him in Louis-le-Grand in Paris in 1823 for his first official education.
The school was in upheaval at the time of Galois’ enrolment, and over a hundred students were expelled, but Galois was kept. He showed considerable promise in his first year, ranking first in Latin thanks to his mother’s outstanding coaching from the beginning.

However, as he grew older, he developed a strong interest in mathematics and demonstrated great perseverance in the subject; soon, his lack of interest in classic literature led him to enroll in his first mathematics class under M. Vernie at the age of 14. He studied Adrien-Marie Legendre’s works on geometry and Joseph-Louis Lagrange’s writings on algebra as if he were “reading a novel” and quickly mastered the material. His class performance began to decline significantly as a result of his proclivity for research.

Galois was endowed with the capacity to perform nearly all of his mathematical computations in his head. His professors and classmates were enraged by this. They frequently couldn’t understand his solutions and sought more information, which irritated him.

In 1828, he attempted to realize his dream of studying at Paris’ most prestigious institution by taking the ‘ÉcolePolytechnique’ examination, but he failed. In the same year, he enrolled in ‘ÉcoleNormale,’ a compromise for him because it did not have the same prestige as his previous university.

The Beginnings of My Career as a Mathematician

Galois’ first article on ‘Continued Fractions’ was published in 1829. Around the same time, he was doing research on the ‘Theory of Polynomial Equations.’ He submitted two articles to the ‘Académie des Sciences’ on the latter, one on the 25th of May and the other on the 1st of June.

Augustin Louis Cauchy, a distinguished mathematician of the Académie des Sciences, read his article but declined to publish it for unclear reasons, which many feel were motivated by jealously.
Contrary to popular opinion, Cauchy simply suggested that Galois integrate the two articles into a more comprehensive theory in order to enter it in the competition for the ‘Academy’s Grand Prize in Mathematics.’

Evariste Galois’s Traumatizing Death Evariste Galois’s father died in a tragic accident not long after. Following a deadly quarrel with the priest of Bourg-la-Reine, his father committed suicide on July 2, 1829.
The priest had apparently forged Mayor Galois’ name on libellous epigrams. Galois’ father was a respectable man, and the scandal was too much for him to bear, so he hanged himself. His father’s untimely death shattered his world and tarnished his life for years to come.

Evariste Galois tried his last effort at the ‘École Polytechnique’ entrance examinations with sorrow, as a student could only attempt these examinations twice. Regrettably, he failed once more.
According to one account of the incident that led to his rejection, one element of the examination was an oral test in which students were interrogated by two university professors. When Galois had to solve a mathematical problem on the chalkboard, however, his habit of working fully in his brain threw him off.
One of the instructors clashed with Galois about his logic during the oral test. The professor was obstinate, contradicting his own logic while refusing to accept Galois’ explanation. This infuriated the child, who flung the board eraser at the professor in a fit of wrath.

Crisis Because of the Revolution

Galois, without a father and without a stipend, risked financial ruin as a result of the ‘Revolution.’ To make ends meet, he posted a notice in front of a grocery store across the street from the ‘Normale,’ promoting a once-weekly private session in higher algebra.

Initially, some pupils enrolled, but soon discovered that the material was beyond their comprehension, and as a result, they quit attending his courses. He devoted all of his time to revolutionary politics and authoring mathematical memoirs on higher algebra, despite facing retaliation at every turn.

He presented his memoir on the theory of equations before the Academy for the third time in 1831. It was returned this time, but with a negative report. The judges, including Siméon-Denis Poisson, were perplexed by Galois’s writing and thought it contained a significant error.

Several of his papers were turned down because they were too obscure. Realizing that he wouldn’t be able to publish a paper until he did it himself, he enlisted the support of his friend Auguste Chevalier, and with his help, he was able to publish three papers.

He put his pieces together the night before the fatal duel and produced proof for a few additional hypotheses. He filled in the blanks in rejected papers and supplied concrete proof for solutions that had been left unfinished for years.

He sent a letter to Auguste Chevalier, requesting that he publish his work. Many fundamental concepts relating to practically all disciplines of mathematics can be found in Galois’ collected works, which spans 60 pages.

In 1830, Cauchy suggested that Galois submit a new work for the ‘Grand Prix of the Academy in Mathematics’ on the condition that “an equation be solvable by radicals.” When he did, the paper was forwarded to Fourier, the Paris Academy’s secretary. Fourier died the following year, and the Galoispapers were misplaced, so they were not considered for the award.

Despite his misfortune, he managed to publish three pieces in 1830. The foundations of ‘Galois Theory’ were laid by one. The second paper dealt with numerical equation resolution, and the third was a seminal work in number theory that articulated the concept of a finite field for the first time.

On May 30, 1832, Evariste Galois was challenged to a duel and shot in the abdomen. In those days, duels were a regular method of resolving disagreements in France. He died the next day as a result of his injuries.
There are a number of explanations as to why the fight was called and why Galois agreed to participate. According to some accounts, the combat between fellow republicans was called by a State secret agent.

Another theory is that he was romantically connected with Mademoiselle Poterin du Motel, his physician’s daughter, and that it was at her urging that he challenged someone to a duel and was slain as a result.
He died as an unidentified person in an unmarked tomb. The world began to revere Galois only years after his death, when the letters and manuscripts he composed hours before his death were revealed.

Galois didn’t get medical help for several hours after he was shot; he could have been rescued if medical help had arrived sooner. He experienced a slow and painful death due to the lack of medical treatment he received.

According to Wikipedia, Forbes, IMDb, and other online sources, Évariste Galois had a net worth of $1-5 million before he died. As a professional mathematician, Évariste Galois made a lot of money. Galois, Évariste, is a Frenchman.