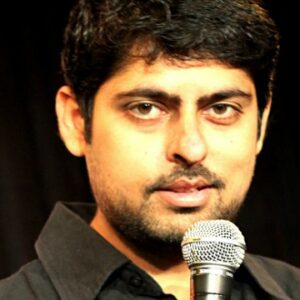 Varun Grover is a stand-up comedian, songwriter, and writer from India. Varun Grover is one of those multi-talented individuals whose strength is in being able to grasp numerous channels of creation and spin them into success. He is a rare blend of cerebral prowess and sensitive literary clairvoyance. He’s a screenwriter who’s written highly praised scripts, a lyricist who’s written the most heartfelt lyrics to beautiful music, and, last but not least, a stand-up comic who has his audiences in splits with no effort. His corpus of work has garnered him numerous significant honors and nominations at both the national and international levels. Varun has established himself as a legitimate candidate for respect and praise as a result of his eloquent writing and compassionate body of socially-minded decisions. The young writer has never been one to follow the crowd, and he continues to amaze us with his unconventional viewpoints.

Varun was born into a middle-class family in Sundernagar, in the picturesque Himalayan state of Himachal Pradesh. He spent much of his boyhood in the idyllic tiny village and did not have access to wealth.

He later relocated with his family to various locations, including Dehradun, Uttarakhand, and Lucknow, Uttar Pradesh, where he spent most of his adolescent years and completed his education.

He enrolled in a Civil Engineering program at the Indian Institute of Technology, Banaras Hindu University, Varanasi, Uttar Pradesh, after finishing high school.

Varun has a passion for writing throughout his school and college years. To help his pals with their love life, he would write poetry.

During that period, he formed important friendships that eventually helped him develop his career in the direction he desired. He also contributed to children’s books and publications on occasion.

He went from the guarded obscurity of his diaries to creating scripts for college theatres during his college days at BHU.

His plays were performed at various national youth festivals, and the positive feedback he got boosted his confidence as a writer.

Varun began working as a software consultant at an MNC in Pune after finishing his engineering degree, but he maintained his desire to be a writer.

He concluded in 2004 that he couldn’t spend the rest of his life being an engineer and took the plunge. He left his job and relocated to Mumbai to focus on his writing career in the entertainment sector full-time.

Varun first struggled to obtain stable writing work in the city, but he persevered because he saw the broader picture. He found it difficult to develop relationships and obtain high-quality jobs.

These gigs gave his writing a humorous edge, as he wrote some of the best jokes and punchlines that appeared on the Great Indian Comedy Show. These also offered him the confidence boost that having a steady job in your subject of interest provides.

The writing assignments in television lasted until around 2010, but they provided Varun with the necessary channels, and he quickly advanced in his profession, writing for films that he had always wanted to.

Varun signed a project titled ‘Accident on Hill Road’ as a dialogue writer in 2010 in order to gain experience writing for films.

He afterward regretted his hasty choice to rush in without giving it much thought and sign on to a sub-par enterprise.

He chose to wait for the right chance, which arrived after a few years. He collaborated as a lyricist with successful director Anurag Kashyap on a number of his productions, including ‘Girl in the Yellow Boots’ (2011), ‘Gangs of Wasseypur I’ (2012), and ‘Gangs of Wasseypur II’ (2013). (2012).

In Bombay Velvet, he collaborated with the filmmaker once more, but this time as an actor (2015). Varun’s career has taken off since ‘Girl in the Yellow Boots.’

Varun was also the project’s writer for the critically acclaimed film ‘Masaan,’ which has received international praise.

Varun is a newcomer to the entertainment world, but unlike most newcomers, he likes to follow his own set of laws and ideals.

He isn’t scared to speak his thoughts, and his candor stands in stark contrast to his peers’ politically correct viewpoints. When the TVF incident involving CEO Arunabh Kumar erupted, Varun was one of the few comedians who dared to share his thoughts.

He also addressed the claims of molestations leveled against Queen and Phantom Productions director/producer Vikas Behl.

For the sake of a stupid bro code, he blamed the entire comedian community for remaining silent and endorsing their ‘unforgivable’ acts.

He’s also talked about how the business undervalues authors in general while deriving inspiration from it.
Varun has received national and international appreciation for his work.

He has been nominated for prominent accolades such as the National Film Awards, Filmfare Awards, Zee Cine Awards, and Apsara Film & Television Producers Guild Awards multiple times for his work as a lyricist.

The lyrics of the ballad ‘Moh Moh Ke Dhage’ from the film ‘Dum Laga Ke Haisha’ received the most nominations in 2015. That year, he was named best lyricist at the 63rd National Film Awards, Guild Awards, and Zee Cine Awards.

In the same year, he received Stardust Awards for best lyricist and screenplay writer for the song “Tu Kisi Rail Si Guzarti Hain” and the film Masaan, respectively.

As a stand-up comedian, his humor is straightforward, appropriate for all ages, and full of brilliant punchlines and comic timing.

He is definitely motivated by the job’s creative delight rather than the amount of money he will be able to save. He gave his entire prize money from the National Film Awards, Rs. 50,000, to a Maharashtra farmer’s relief fund.

Varun Grover is a terrific writer and a gem of a human being who is just getting started in the profession and has a long way to go.

Varun Grover has an estimated net worth of Rs. 85 crore.