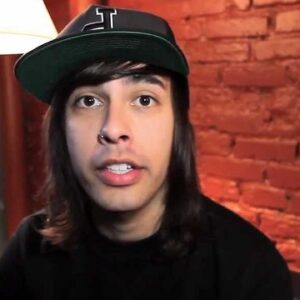 Victor Vincent ‘Vic’ Fuentes is a singer, rhythm guitarist, keyboardist, and songwriter from the United States. He is currently a member of the post-hardcore band ‘Pierce the Veil,’ which also includes his brother Mike on drums, bassist Jaime Preciado, and lead guitarist Tony Perry. Vic and Mike’s previous band, ‘Before Today,’ disbanded in 2006, and the band was founded a few months later. Their debut album, ‘A Flair for the Dramatic,’ was published in 2007. Since then, the band has released three additional albums. For the first time, the band headlined a tour in October-November 2008. ‘Emarosa, Breathe Carolina, and Four Letter Lie’ were among the acts on ‘The Delicious Tour.’ ‘Misdelphia’ (‘Aviation’), ‘Chiodos’ (‘Love Is a Cat from Hell’), ‘Punk Goes Pop 5’ (guest vocal for Gotye’s ‘Somebody That I Used to Know’), ‘All Time Low’ (‘A Love Like War’), and ‘Slaves’ (‘Starving for Friends’) are among his other collaborators.

The career of Vic Fuentes

Vic Fuentes began playing the guitar when he was seven years old. In 1998, he and Mike formed the band ‘Early Times,’ which was the start of their musical adventure together. They put out three EPs before being forced to change their name to ‘Before Today’ due to legal issues. They signed with ‘Equal Vision Records’ about this time. ‘A celebration of an Ending,’ the band’s only album, was published in 2004. The group split two years later. Despite this, the brothers continued to record songs and did not lose their contract. They formed a new band, dubbed ‘Pierce the Veil,’ after a term Vic learned in college sociology class.

On June 26, 2007, the band released their debut album, “A Flare for the Dramatic.” Preciado and Perry were quickly hired after the Fuentes brothers held an audition for more members. Vic and Mike became members of the supergroup project ‘Isles & Glaciers’ in 2008. On March 9, 2010, they released their first and only EP, ‘The Hearts of Lonely People.’ Pierce the Veil’s second album, ‘Selfish Machines,’ was released on June 21, 2010, and they went on to tour across America, Australia, New Zealand, and Japan. The album debuted at number one on Billboard’s Heatseekers Chart.

On August 23, 2011, they signed a recording contract with Fearless Records, and their debut album, ‘Collide with the Sky,’ was released on July 17, 2012. It has now been their most financially successful album, debuting at number 33 on ‘Rock Sound’ magazine’s top albums of 2012 list and garnering the band numerous accolades. They published the DVD ‘This Is a Wasteland,’ a documentary on their first world tour, on November 11, 2013.

Their fourth and most recent album, ‘Misadventures,’ was released on May 13, 2016. The critics have praised this album in the same way as they have praised the others. “Every single tune is a winner,” according to ‘Alternative Press,’ which gave the album a 90/100 rating. PTV’s own map is skillfully redrawn in Misadventures, which celebrates the improbable blend of ambitious, creative obsessions and the explosive crackle of raw emotion.”

When Fuentes and his band allegedly brought in a second artist to replicate an original song by Daniel Danger, ‘Escape,’ without his clear agreement, they sparked a stir. The band first approached Danger about licensing ‘Escape’ and having him work on the layout for their album ‘Collide in the Sky.’

Danger was either unavailable at the time or unable to complete the project within the deadline set by the band. The band had only two weeks to finalize and print a comprehensive design and layout, so considering another concept was obviously out of the question. As a result, they went to another artist for it. Danger was ultimately given credit for the artwork concept.

Vic Fuentes is of mixed Irish and Mexican ancestry. On February 10, 1983, he was born in San Diego, California, United States. Vivian K. Fuentes is his mother. Victor Gamboa Fuentes, his father, is a former Mexican jazz musician who taught him how to play the guitar. He has two half-brothers and a half-sister in addition to Mike.

He graduated from ‘Mission Bay High School’ before enrolling at ‘San Diego State University’ to pursue a degree in graphic design. After three semesters of college, he left out to pursue a career in music. Throughout his career, Fuentes has had a number of relationships. He is presently dating model Danielle Victoria Perry, who participated in the band’s ‘King for a Day’ music video.

Vic Fuentes is a millionaire singer and musician from the United States who has a net worth of $1 million. Vic Fuentes was born in February 1983 in San Diego, California. Pierce the Veil’s lead singer and rhythm guitarist is his most well-known role. In 2004, Fuentes appeared on the album A Celebration of an Ending by the band Before Today.