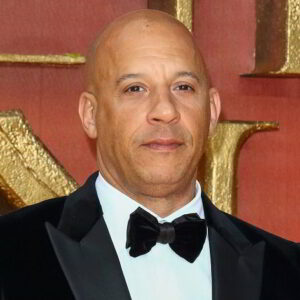 Mark Vincent, better known in Hollywood as Vin Diesel, is an American actor, director, producer, voice actor, and screenwriter. He developed an interest in acting at a young age and stayed active in New York City theater throughout his adolescence. He enrolled in a creative writing course in college, which inspired him to begin writing scripts. Diesel began his career in the entertainment industry with the short semi-biographical film ‘Multi-Facial,’ which he directed, wrote, acted in, and produced, and which premiered at the Cannes Film Festival. But he didn’t get the recognition he deserved until Steven Spielberg cast him in his multi-starrer film ‘Saving Private Ryan.’ Diesel is best recognized for his action roles in the ‘Fast and Furious’ franchise, in which he has played ‘Dominic Toretto’ multiple times. Several films in the franchise cemented his reputation as an action hero in the industry. ‘The pacifier,’ ‘xXx,’ ‘Riddick,’ and others are among Diesel’s other films. Along with performing, this deep-voiced actor runs production firms such as ‘One Race Productions,’ ‘Racetrack Records,’ and ‘Tigon Studios,’ and has produced films such as ‘Hitman.’

Diesel was born in New York City on July 18, 1967, to Delora Sherleen Vincent, an astrologer. Although he has an African-American stepfather, Irving H. Vincent, who is an acting coach and theatrical management, he has never met his actual father.
He was always interested in acting, and at the age of seven, he had his stage debut in the children’s play ‘Dinosaur Door.’ It debuted at New York’s Greenwich Village’s ‘Theater for the New City.’
He went to Hunter College and was active in theatre throughout his adolescence. He majored in creative writing in college, which led to him penning scripts. He began his career as a bouncer at the Tunnel nightclub.

Diesel made his big screen debut in 1990 with a cameo in the film ‘Awakenings.’ His appearance in the film was uncredited. But that didn’t stop him from acting on his convictions.
In 1994, he directed, produced, acted in, and wrote the narrative for ‘Multi-Facial,’ a short semi-autobiographical film. The film was chosen for a screening at the Cannes Film Festival in 1995.
In 1997, he released his first feature-length film, ‘Strays.’ He directed, produced, wrote, and starred in the urban drama. It was chosen for competition at the Sundance Film Festival, which led to an agreement with MTV to make it into a series.
Diesel was cast in Steven Spielberg’s ‘Saving Private Ryan (1998)’ in the late 1990s after Spielberg was pleased by his work in ‘Multi-Facial.’ He also provided the voice for the animated feature “The Iron Giant (1999).”
Diesel had a busy start to the year 2000, with the release of his films ‘Boiler Room,’ a criminal drama, and ‘Pitch Black,’ a science fiction thriller in which he played the anti-hero.
The films ‘The Fast and the Furious (2001)’ and ‘xXx (2002)’ cemented Diesel’s image as an action hero. These films were huge box office hits, and Diesel became an action hero as a result.
Diesel maintained his fame and box office success in the mid-2000s with films like ‘The Pacifier (2005),’ a lighthearted comedy, and ‘Find Me Guilty (2006),’ in which he played ‘Jack DiNorscio.’
He made a cameo appearance in ‘The Fast and the Furious: Tokyo Drift’ in 2006, reprising his character as ‘Dominic Toretto.’ He rejected down roles in the films ‘2 Fast 2 Furious’ and ‘xXx: State of the Union.’
In 2007, he intended to produce and star as ‘Agent 47’ in a cinematic adaptation of the popular computer game ‘Hitman,’ but he ended up simply serving as an executive producer.

Diesel starred in the science fiction action film ‘Babylon A.D. (2008)’ and then returned to the ‘Fast and Furious’ franchise in ‘Fast & Furious (2009).’
In the fifth and sixth installments of the franchise, ‘Fast Five (2011)’ and ‘Fast & Furious 6 (2013),’ Diesel reprised his role as ‘Dominic Toretto.’
In the third installment of the ‘Riddick’ series, ‘Riddick (2013),’ he resumed his role as ‘Riddick.’ Diesel received an honorary star on the Hollywood Walk of Fame in the same year for his contributions to the film business.

Diesel has a long list of credits, but his most well-known role is that of ‘Dominic Toretto’ in the ‘Fast and Furious’ franchise. Several films in the franchise cemented his reputation as an action hero.

Diesel has received numerous honors and prizes for his acting abilities, including the MTV Movie Award for “The Fast and the Furious,” the Spike Video Game Award, the Video Software Dealers Association Award, and the CinemaCon Award.

Diesel and his Mexican model girlfriend Paloma Jimenez have a daughter, Hania Riley, and a son, Vincent.

In 2001, he dated Michelle Rodriguez, his ‘Fast and Furious’ co-star.

Paul is his twin brother, Tim is his younger brother, and Samantha is his sister.
He is very guarded and private about his personal life.
He admires the Dominican Republic’s multicultural aspects and knows its president, Leonel Fernandez.
He is a long-time lover of the video game ‘Dungeons & Dragons,’ which he has played for more than 20 years. For the memorial book ’30 Years of Adventure: A Celebration of Dungeons & Dragons,’ he penned the foreword.
He was considered for the character of ‘Matt Murdock’ in ‘Daredevil’ (2003), but Ben Affleck was cast instead.
Diesel’s mother is descended from English, German, and Scottish stock.
With George Zakk, he is a co-producer. One Race Productions is the name of their company.
Kwame ‘The Boy Genius,’ a rapper and producer, is his cousin. If you watch Kwame’s previous videos, you’ll notice Diesel in a number of them, he claims.
Diesel used to be a telemarketer who sold light bulbs.

He once wrote director Steven Spielberg a three-page letter expressing his enthusiasm for his work, particularly “Schindler’s List.”
The nickname ‘Vin’ is an abbreviated form of his given name, ‘Vincent.’ His buddies gave him the nickname ‘Diesel,’ implying that he ran on diesel fuel due to his never-ending energy.