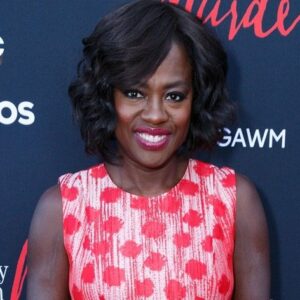 Viola Davis is an award-winning actress and producer from the United States. Davis, who grew up in a poor family, put in a lot of effort to get over her difficult childhood. In less than a decade, she went into acting and starred on TV, in films, and on stage, gaining tremendous reputation and fame. She is the first black actress to win the Triple Crown of Acting (Oscar, Emmy, and Tony Awards), as well as the first black actress to receive three ‘Academy Award’ nominations. Viola Davis has also received two awards from the ‘African-American Film Critics Association.’ Davis won scholarships and studied acting in New York after appearing on TV and stage during the late 1990s. She began her career as a stage performer in New York, and then moved on to small film parts. At the same time, the actress began appearing in tiny roles on the big screen. Davis’ penchant for acting landed her roles in scores of television shows and films. Her credits on the small and big screens are undeniably impressive, but it is on the stage that she has truly shone. Davis has been portraying conventional African-American roles, each time adding her own unique twist. ‘Time’ magazine has also named the actress as one of the world’s top 100 most important individuals.

Viola Davis was born on August 11, 1965, in St. Matthews, South Carolina, to her grandparents. Dan Davis, her father, was a horse trainer. Her mother, Mary Alice, was a factory worker and a maid. Mary was a civil rights activist as well. Viola is the second youngest of six children born to her parents. The family relocated to Rhode Island two months after Davis was born. Davis and two of her sisters were sent to Rhode Island, but her oldest brother and sister remained with their grandparents. Her parents’ earnings were insufficient to keep the family afloat. They lived in filthy, rat-infested apartments and had to deal with periodic food shortages.

Davis was sent to jail alongside her mother when she was two years old, when the latter was arrested during a demonstration. She went to ‘Central Falls High School,’ where she discovered her passion for acting. She went on to ‘Rhode Island College,’ where she studied theatre and graduated in 1988. She went on to the famed ‘Juilliard School’ in New York City after graduation.

Viola Davis first appeared on Broadway in Joe Turner’s ‘Come and Gone’ in 1988. In ‘The Substance of Fire,’ she also played a nurse. She made her film debut in ‘The Substance of Fire,’ following which she received her Screen Actors Guild card. She had a brief part in Steven Soderbergh’s ‘Out of Sight’ in 1998. In the play ‘King Hedley II,’ she played a lady fighting for the right to abort her pregnancy in 2001. For her performance in this Broadway production, Davis received the Tony Award.

Davis has also appeared in a number of television shows. One of her most memorable roles was as a serial killer in the television show ‘Law & Order: Criminal Intent’ in the episode ‘Badge.’ When she starred in ‘Antwone Fisher,’ this African-American beauty drew the attention of critics in 2002. She didn’t have many lines in this film, but her presence was felt. Davis’s career took off in 2008 when she starred as ‘Mrs. Miller,’ the mother of a youngster who is suspected of being abused by a priest, in the film adaption of the Broadway play ‘Doubt.’ In August Wilson’s ‘Fences,’ Viola Davis returned to the stage in 2010 and gave another show-stopping performance. In 2011, she starred in Kathryn Stockett’s best-selling novel ‘The Help,’ which was adapted for the big screen. The racial difference between white housewives and their black servants was underlined in this video. In 2014, she collaborated on ‘Get on Up,’ a biography of musician James Brown, alongside filmmaker Tate Taylor. She portrayed the mother of the singer in the film. She was cast as ‘Professor Annalise Keating’ in ‘How to Get Away with Murder’ the following year. She starred in a number of films between 2015 and 2019, including ‘Blackhat,’ ‘Custody,’ ‘Suicide Squad,’ ‘Widows,’ and ‘Troop Zero.’ Viola Davis was nominated for an Academy Award for Best Actress for her performance in Ma Rainey’s Black Bottom in 2020.

Viola Davis’ performance in ‘Doubt’ in 2008 catapulted her career to new heights. Despite playing a minor role, her portrayal of ‘Mrs. Miller’ left a lasting impression. The actress played a maid in Kathryn Stockett’s book ‘The Help,’ in which she was interviewed by a white writer for a book. Her character was based on her real-life mother and grandmother, who worked in cotton and tobacco fields and as maids.

Viola Davis married actor Julius Tennon in 2003. Genesis, a girl, was adopted by the couple in October 2011. Tennon’s children from prior relationships are cared for by Davis.

Viola Davis has a $12 million net worth.

For her portrayal of a maid’s character in ‘The Support,’ she enlisted the help of her mother. In the film ‘Get on Up,’ Davis and her daughter Genesis co-starred.