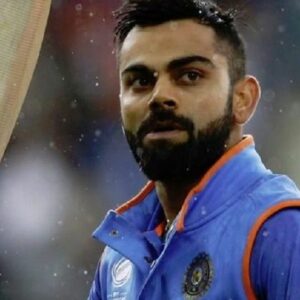 Virat Kohli is an Indian international cricketer who is regarded as one of the country’s best athletes. He is regarded as one of the best batsmen of his generation, as well as a right-arm medium pace bowler on occasion. He is recognized for his consistent and powerful hitting style, and he has won several matches for India on his own. Virat fell in love with cricket at a young age and began playing when he was just three years old. When he was nine years old, his parents saw his potential and enrolled him at the West Delhi Cricket Academy. Over the years, he blossomed into a gifted player who represented his hometown of Delhi at various age-group levels and in local cricket. His first great achievement came in 2008, when he led India’s Under-19 team to victory at the Under-19 World Cup. He was quickly selected for the Indian team and quickly established himself as a valuable middle order batsman. He has proven his mettle in test cricket after earning a reputation as a “ODI expert.” In Test cricket, he is the captain, while in limited overs cricket, he is the vice-captain of the Indian side. Virat Kohli is married to Anushka Sharma, a well-known Indian actress.

Virat Kohli was born in Delhi, India, on November 5, 1988, to Prem Kohli and Saroj Kohli. His father worked as a criminal defense attorney, while his mother is a stay-at-home mom. Vikash, his older brother, and Bhavna, his older sister, are his siblings.
When he was a little lad, he grew interested in cricket. He would take up a cricket bat at the age of three and urge his father to bowl to him. Vishal Bharti Public School was where he acquired his early education.
Virat’s love in cricket grew, and when he was nine years old, his father enrolled him at the West Delhi Cricket Academy. He attended Rajkumar Sharma’s institution and also played matches at the Sumit Dogra Academy.

In the 2002–03 Polly Umrigar Trophy event, he was the highest run-getter for the Delhi Under-15 team. He was named captain of the team for the Polly Umrigar Trophy in 2003–04.
In the 2003–04 Vijay Merchant Trophy, he was named to the Delhi Under-17 team. In four matches, he scored 470 runs at an average of 117.50 with two hundreds. The following season, he continued his outstanding performance and helped Delhi win the Vijay Merchant Trophy for the 2004–05 season.
His continuous efforts earned him a spot in India’s Under-19 squad for the 2006 trip to England. In the three-match ODI series, which India Under-19 won, he averaged 105. Later that year, he also had a strong showing against Pakistan’s U-19 cricket squad.
Kohli’s father died when he was only 18 years old, in 2006. His father had been his most steadfast ally, and his untimely death threw the family into financial ruin. Kohli began to take the game even more seriously now that he had additional duties on his young shoulders.
He led India to victory in the 2008 ICC Under-19 Cricket World Cup, which was hosted in Malaysia. Following that, he was signed to a youth deal by Royal Challengers Bangalore of the Indian Premier League for $30,000.
In 2008, he was named to the Indian ODI squad for a tour to Sri Lanka. Because both regular openers Sachin Tendulkar and Virender Sehwag were injured during the tour, he batted as a temporary opener throughout the series. India finally won the series 3–2, giving them their first ODI series victory in Sri Lanka.
Throughout 2009, he maintained a constant level of performance. During the 2009 ICC Champions Trophy, he got his first man of the match award after making an unbeaten 79 against the West Indies in a group match. Later that year, he featured in a home ODI series against Sri Lanka, scoring his first ODI century in the fourth match of the series (107 off 111 balls).
He maintained his excellent form, earning a spot in the 2011 World Cup squad. Kohli appeared in every match of the tournament, including an undefeated century against Bangladesh in the first match, making him the first Indian batsman to reach a century on World Cup debut. India advanced to the finals, where Kohli hit a crucial 35 runs against Sri Lanka. India went on to win the World Cup for the first time since 1983, winning by six wickets.
During India’s June–July 2011 tour of the West Indies, the team was primarily inexperienced, and Kohli was one of three uncapped players in the Test squad. In the first match of the Test series, he made his Test debut at Kingston. Although India won the Test series 1–0, Kohli struggled against fast bowling. He was dropped from the Test squad after scoring just 76 runs in five innings in the series. In July and August 2011, he was recalled to the Test squad as a replacement for the injured Yuvraj Singh for India’s four-match series in England. He did not play in any Test matches during the series, although he did have a moderate amount of success in the ODIs.
During India’s tour of Australia in December 2011, he created an impression in Test cricket. India lost the Test series 4–0, however Virat Kohli was the series’ leading run scorer. In the first innings of the fourth and final match at Adelaide, he hit 116 runs for his maiden Test century.
Kohli was named vice-captain for the 2012 Asia Cup, which will be held in Bangladesh. He hit 183 when chasing in the final group stage match against Pakistan, the highest individual score against Pakistan in ODIs, and beat West Indies’ Brian Lara’s long-standing record of 156. Despite his outstanding achievements, India was unable to advance to the tournament final.
Throughout 2013, he continued to have a streak of successful stints. In the seven-match ODI series against Australia, he scored the fastest century by an Indian in ODIs by smashing a century off just 52 balls in the second match at Jaipur. His 100-not-out innings aided India’s pursuit of the 360-point mark.
Kohli is a competent test player, despite being better recognized for his blistering ODI performances. He was selected captain of the Indian test team in 2014. He scored 692 runs in four Tests on the same year’s Australian trip, the most by any Indian batsman in a Test series in Australia.
In 2015, he experienced a brief lull in his career due to a lack of huge wins. During South Africa’s tour of India later that year, he quickly rediscovered his form and became the world’s fastest batter to make 1,000 runs in T20I cricket.
Kohli had a fantastic year in 2016. His outstanding batting performances in the 2016 T20 World Cup in India helped India reach the semifinals. Philanthropic Contributions
In 2013, Virat Kohli established the ‘Virat Kohli Foundation’ (VKF), a charitable organization dedicated to assisting impoverished youngsters. The organization also organizes fundraising activities for charitable causes.

Anushka Sharma, a Bollywood actress, was in a high-profile romance with Virat Kohli. The couple apparently broke up in early 2016, but later patched things up and reunited.
On December 11, 2017, Virat and Anushka Sharma married. The couple married in Borgo Finocchieto, Tuscany, Italy.
The wedding of Virat and Anushka (Virushka) was an extremely private occasion, with no one knowing about it until a few days before the wedding. According to accounts in the media, everyone engaged in the wedding, including photographers, caterers, and hotel personnel, was bound by non-disclosure agreements (NDA).

Virat Kohli is recognized for his incredible mental toughness, as one event exemplifies. Virat Kohli was in the middle of a Ranji Trophy match for Delhi when he lost his father. He received a call at 3 a.m. informing him that his father had died. He was the Delhi batting for the night, and his side was in a tight spot. After that innings, he went to his father’s funeral and scored a match-saving 90 runs for his team the next day.

Virat’s second favorite sport is football, according to reports. He purchased the FC Goa franchise of the Indian Super League (ISL) in 2014, citing his desire to see the sport expand in India as a football fan. He also claimed that he saw it as a long-term investment.
Kohli joined the London-based social networking venture ‘Sport Convo’ as a brand ambassador and investor in 2014. Kohli created the WROGN fashion label in November 2014 in collaboration with Anjana Reddy’s Universal Sportsbiz (USPL). The brand sells men’s casual clothing and has partnered with Myntra.com and Shopper’s Stop.
Virat Kohli became a co-owner of the UAE Royals club of the International Premier Tennis League in September 2015. (IPTL). The IPTL is an annual team tennis tournament held in several Asian locales.
He invested INR 90 crore (about $14 million) in Chisel, a chain of gyms and fitness centers, in 2015. Kohli, Chisel India, and CSE are co-owners of the workout chain (Cornerstone Sport and Entertainment).
He became a co-owner of the Bengaluru Yodhas franchise of the Indian Pro Wrestling League in December 2015. The JSW group is the franchise’s other co-owner.
Virat established Stepathlon Kids, a fitness enterprise for children, in collaboration with Stepathlon Lifestyle in 2016.