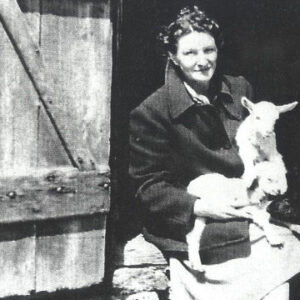 Virginia Hall Goillot was the most wanted American spy by the ‘Geheime Staatspolizei’ (Gestapo), the Nazis’ top secret police. Following the loss of a piece of her left leg, which prevented her from pursuing a career in the Foreign Service, she began spying during World War II with the British “Special Operations Executive.” Later, she joined the ‘Special Operations Branch’ of the ‘Office of Strategic Services’ of the United States. After the war, she served as a French legislative affairs intelligence analyst in the Special Activities Division of the Central Intelligence Agency (CIA) of the United States. During her time as a spy, she used the aliases “Nicolas,” “Marie of Lyon,” “Marie Monin,” “Camille,” “Diane,” and “Germaine.” Germans referred to her as “Artemis” and “woman with the limp.” She was a “Member of the Order of the British Empire” (honorary) General William Joseph Donovan presented her with the ‘Distinguished Service Cross’ on September 27, 1945, as the sole civilian woman for her achievements in France during World War II. In 2006, she was honored posthumously by the British and French embassies. Virginia Hall’s life is recounted in “The Wolves at the Door: The True Story of America’s Greatest Female Spy” by Judith L. Pearson and “L’Espionne: Virginia Hall, an American in World War II” by Vincent Nouzille.

She was born on April 6, 1906, in Baltimore, United States, to a wealthy family headed by Edwin Hall. Her father was the owner of a Baltimore theater.
She attended the famed Radcliffe College, a women-only liberal arts college in Cambridge, Massachusetts, after studying at the prestigious ‘Roland Park Country School’

She also attended the elite New York liberal arts college for women, Barnard College.
With the assistance of her parents, Virginia Hall went throughout Europe and studied in Germany, Austria, and France. She was a language fanatic who has studied German, French, and Italian.

In 1931, she joined the American Embassy in Warsaw, Poland, as a clerk for the Consular Service. She intended to pursue a career in Foreign Service at the US State Department.

During a hunting excursion in Turkey in 1932, she accidentally shot herself in the left leg. This resulted in the amputation of her left leg below the knee. She began wearing a wooden leg in the establishment and referred to it as “Cuthbert.”

Although she did not allow the misfortune to deter her, it posed an obstacle to her desire of pursuing a career in the Foreign Service. In 1939, she was compelled to resign from her position due to a US State Department law prohibiting the employment of those with “any amputation of a portion of a limb.”
She eventually studied at the ‘American University in Washington, DC.

At the onset of the Second World War, she joined the French Ambulance Service Unit while residing in Paris.
When the Nazis invaded France in May 1940, she managed to flee to England.

In 1941, she was recruited by the British “Special Operations Executive” as a special agent (SOE). In August of that year, she returned to France posing as a reporter for the ‘New York Post’ with the codename ‘Mary’. She assisted in developing a network of resistance in Vichy for fifteen months.

Early in 1942, after relocating to Lyons, she worked diligently. In late 1942, around November, the Germans seized France unexpectedly, and as their mistrust of her intensified, she fled to Spain. She then served for the British “Special Operations Executive” (SOE) in Madrid.

After returning to London in July 1943, she was made an honorary “Member of the Order of the British Empire” (MBE).

In March 1944, she joined the ‘Special Operations Branch’ of the ‘Office of Strategic Services of the United States, and on March 21, she was transported back to France. Due to the fact that her “Cuthbert” precluded her from using a parachute, she was landed on the coast of Brittany by a British MTB.

This time, she entered France using a fraudulent French identification card using the name Marcelle Montagne, but her colleagues referred to her as “Daine.”
She evaded the ‘Gestapo,’ who knew of her actions and referred to her as the ‘woman with the limp,’ in order to join the ‘French Resistance’ in the Haute-Loire region.

She marked drop zones from which commandos, money, guns, and other supplies can be dispatched from England. She prepared for safe places, and when the Allies landed in Normandy, she contacted a Jedburgh squad.
She was able to inform the Allies of the relocation of the Germans’ headquarters from Lyons to Le Puy despite the heightened vigilance of the “Gestapo.”

She assisted in the training of three battalions of resistance soldiers for guerilla warfare against the Germans.
In 1951, following the conclusion of World War II, she began working as a French legislative affairs intelligence analyst for the Special Activities Division of the Central Intelligence Agency.
She retired from the CIA in 1966 and moved to a farm near Barnesville, Maryland.

In 1950, she wed Paul Goillot, an agent for the “Office of Strategic Services.”
She passed away on July 8, 1982, at the ‘Shady Grove Adventist Hospital in Rockville, Maryland, and was interred in the ‘Druid Ridge Cemetery in Pikesville, Maryland.

Virginia Hall’s estimated net worth is $9 million, and her primary source of income is as a spy and intelligence analyst. We lack sufficient documentation of Virginia Hall’s automobiles and way of life.