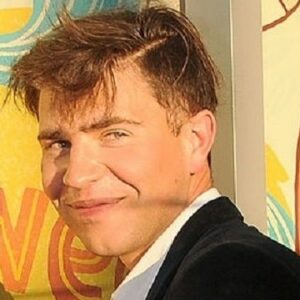 Assaulting numerous celebrities has made Vitalii Sediuk, a Ukrainian reporter, self-described cultural analyst, and comic, famous. He gained access to areas that were typically off-limits to the public in the majority of these instances. Sediuk has always had a passionate interest in literature and the arts. While still a college student, he made the decision to pursue a career in reporting and was able to secure his first internship with the Ukrainian TV channel “TET.” Two years later, he started working as a reporter for the morning program “Breakfast” on Studio 1+1, the most watched television network in Ukraine. Even though he has given many valid interviews, he has become notorious for his pranks toward celebrities, especially on the red carpet. Madonna, Will Smith, Leonardo DiCaprio, Brad Pitt, Adele, Bradley Cooper, and America Ferrera are among the celebrities on his list of victims. The others disagree with Sediuk’s claim that his actions are harmless pranks. For one of these incidents, he was once let go from Studio 1+1, and for another, he was prohibited from attending any Hollywood gatherings.

When Vitalii Sediuk first started working, he was an intern for the Ukrainian TV station “TET.” In the following two years after joining “Breakfast,” he conducted interviews with celebrities like Bill Clinton, Madonna, Sarah Jessica Parker, Kylie Minogue, Toni Braxton, Will Smith, Pamela Anderson, Jean-Claude Van Damme, and Monica Bellucci. He first came to the public’s attention in 2011 during Prince William and Kate Middleton’s nuptials. In the form of a Ukrainian prince, Sediuk approached a BBC presenter and proposed marriage.

The event with Madonna was what really brought Sediuk to the attention of the general public and celebrities alike. He was aware of the pop icon’s intense dislike of hydrangeas previously. He gave her a bouquet of flowers on September 1st at the 2011 Venice Film Festival, and she was spotted expressing her disgust in front of the media. It caused a stir regarding Madonna’s alleged abuse of her followers.

After he kissed Will Smith at the Moscow premiere of “Men in Black 3” on May 18, 2012, the actor smacked him. Clearly irritated, Smith enquired, “What the hell is your problem, buddy?” Later, Sediuk apologized to Smith during a CBS program.

He entered the stage at the 2013 Grammy Awards without a ticket or other identification. Adele was accepting her trophy at the time for best solo performance. A moment aired to the entire world but only noticed by a small number, Sediuk said as he rushed up to the microphone. After being charged with many offenses, he entered a plea of not guilty and was given a six-month suspension.

At the 85th Academy Awards, he attempted to make a splash by donning a drag costume, but security turned him away. He introduced a new prank in January 2014 when he would kneel at the feet of a celebrity and bury his face in his groin. Bradley Cooper was his first victim; he was there at the 20th Screen Actors Guild Awards at the time of the assault. Leonard DiCaprio was subjected to this as well, at the 2014 Santa Barbara International Film Festival. But when he attempted to do the same with Brad Pitt, the Los Angeles police ended up arresting him.

Initial reports claimed that Sediuk had attacked Pitt on May 28, 2014, at the El Capitan Theater’s premiere of “Maleficent,” breaking his spectacles, but Pitt’s own statement provided a different account. Pitt knocked Sediuk twice on the back of the head to get his attention, and as the security was attempting to pry Sediuk off Pitt, he reached up and caught Pitt’s glasses, according to the “Moneyball” star, who claimed that Sediuk had “stage-driven” at him and was about to bury his face in Pitt’s groin. He was charged with assault and battery but entered a no-contest plea and was given a sentence of 20 days of community service and a $440 fine in lieu of court expenses. All Hollywood-related activities were likewise off limits to him.

On May 16, 2014, as America Ferrera was attending the premiere of her movie “How to Train Your Dragon” and posing for photos at the 2013 Cannes Film Festival, Sediuk snuck under her dress. Many demanded that he be charged with sexual assault after this incident. The studio 1+1 sacked him as well.

He accosted Kim Kardashian physically in September 2014 and nearly did it again two years later, hugged Ciara while wearing nothing but a G-string, and hugged model Gigi Hadid from behind and lifted her in the air in September 2016. These incidents occurred over the years. He ran nude on the Prabal Gurung runway show at New York Fashion Week in 2014. He recently streaked spectators at the 2017 Eurovision Song Contest.

The short film “Gortensia,” which Sediuk wrote, produced, directed, and starred in 2012, was based on his experience with Madonna.

On November 14, 1988, in Boryspil, Ukraine, Vitalii Sediuk was born. He started attending Wisconsin International University in Ukraine after high school to pursue an economics degree. Sediuk made the decision to become a television personality at the age of 19, while he was still a second-year student at his institution.

In terms of Sediuk’s net worth, his professional career has brought in a sizable sum of money. He is thought to be worth about $1 million. Nevertheless, his pay is still being evaluated.