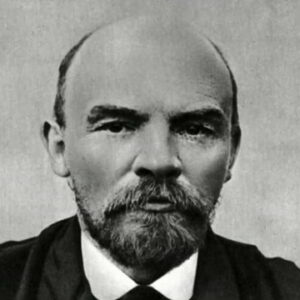 Vladimir Lenin was a Russian communist philosopher and the founder of the ‘Soviet Republic.’ He was a passionate Marxist believer. He is best known for being the leader of the ‘Bolshevik Party,’ which was instrumental in remaking Russia. Lenin, who was seen as a saint by some and a dictator by others, suggested state capitalism reforms in Russia, which resulted in the country’s profound transformation. Lenin fuelled the Bolshevik revolution and later became the ‘Premier’ of the newly established Union of Soviet Socialist Republics, making him one of the most talked-about leaders of the twentieth century (USSR). His views, when joined with Karl Marx’s, became known as ‘Marxism-Leninism,’ a theory that paved the way for a variety of radical schools of thought, including ‘Trotskyism,’ ‘Maoism,’ and ‘Stalinism.’ His administration supervised the adoption of a number of social reform initiatives, automation, and the ‘New Economic Policy.’ During World War I, Lenin was one of the key organizers of the infamous ‘October Revolution,’ which was largely influenced by one of his best-known publications, ‘The April Theses.’ Lenin was a controversial leader who worked exceedingly hard. He was gifted with excellent oratory talents as well as a sense of humour.

Vladimir Ilyich Lenin was born in Simbirsk, Russian Empire, on April 22, 1870. He was the third of Ilya Nikolayevich Ulyanov and Maria Alexandrovna Blank’s six children.
His father was a well-known Russian schoolteacher who won multiple awards for his contributions to education. His mother, a Jewish doctor’s daughter, was well-versed in Russian literature. She was adamant about her children receiving a good education.
Aleksandr Lenin, Lenin’s older brother, was a gold medallist from ‘St. Petersburg University.’ Later, he became active in anti-Tsar Alexander III political activity. He staged multiple protests before being jailed on suspicions of plotting to overthrow the Tsar. On May 20, 1887, he was executed.

Despite his grief following the deaths of his father and older brother, Lenin resumed his studies and obtained a gold medal for his outstanding academic performance. In 1887, he enrolled at the ‘Kazan University’ to study law.
He became interested in his late brother’s views while in university. He began participating in student protests, and as a result, he was expelled. Around this time, he was impressed by Karl Marx and enrolled at ‘St. Petersburg University,’ where he finished his law studies and passed the bar test.
He was appointed as a barrister in 1892, although he continued to engage in radical political activities. He came up with ideas on how Marxist theory may be used to transform Russia. Soon after, he joined the ‘Social Democrats’ faction, which was led by S.I. Radchenko, a cell member.
In just a few years, Russia’s revolutionary cells multiplied. By 1894, Lenin had risen to the position of cell leader. ‘What the Friends of the People Are and How They Fight the Social-Democrats,’ he authored as his first political thesis. Despite being prohibited, the treatise was illegally marketed in over 200 copies.
For his revolutionary efforts, he was arrested soon after, along with his coworkers, and deported to Siberia for three years. He met his future wife, Nadezhda Krupskaya, in Siberia.
Because their extreme activities were being closely observed by Russian security forces, Lenin and Nadezhda temporarily relocated to Munich, Germany, where they continued their Russian propaganda.
In 1900, he founded the ‘Iskra,’ or ‘Spark,’ a journal that accelerated the Russian-Marxist movement while also pulling non-Russian Marxists into the revolution.

Re-exile, the Russian Revolution, and World War I

Russia was at war with Japan in 1904. The conflict had a profound influence on Russian society, prompting protests and calls for political reform. In 1905, Lenin took advantage of the situation and returned to St. Petersburg to help the ‘Russian Revolution.’ He was then elected president of the restructured ‘Russian Social Democratic Labor Party’ (RSDLP).
Tsar Nicholas II convened the ‘Duma,’ a legislative assembly, to put an end to the ‘Russian Revolution’ and appease the anxious Russian population. However, Lenin was dissatisfied with the new assembly’s creation and relocated to Geneva, Switzerland in 1905.
He went throughout Europe and participated in several socialist-Marxist initiatives during his voluntary exile in Switzerland. In 1909, he wrote a book called “Materialism and Empirio-criticism.”
Most ‘Social Democratic’ parties supported the war operations in their separate homelands at the onset of ‘World War I,’ but Lenin’s views on the war were far from supportive. He returned to Switzerland to escape the war’s mayhem, when he joined the ‘Zimmerwald Conference,’ an anti-war socialist conference organization.
In 1917, Lenin published ‘Imperialism, the Highest Stage of Capitalism,’ which presented a synthesis of various revolutionaries’ beliefs such as Rudolf Hilferding’s, Karl Kautsky’s, and John A. Hobson’s. In ‘World War I,’ he also emphasized the widespread capitalist competitiveness. He believed that the French and British engagement in “World War I” was mostly motivated by imperialistic and capitalistic goals, and that Russia was being used as a stooge.
Tsar Nicholas II had to abdicate the throne at the start of 1917. In the middle of the tumult, an interim administration was formed. Lenin was still in Zurich at the time. He was determined to return to his homeland and strengthen the revolution when he learned of the new development.
He returned to Petrograd, Russia, on April 16, 1917, and was greeted by a large crowd. He lectured to the throng about the importance of the upcoming ‘Russian Revolution.’ He declared, “Hail to the Global Socialist Revolution.”
He proclaimed the start of a new socialist revolution. Despite intense opposition, he was able to spread anarchy throughout Russia with the help of his supporters. He made excellent use of his oratory skills, which worked wonders on the already enraged Russian mob.
Fearing incarceration after a failed coup against the interim government in August 1917, he escaped to Finland with his followers. When he urged an armed uprising, some of his most ardent supporters were taken aback. Lenin returned to Russia in October 1917 and launched the ‘October Revolution,’ which resulted in the de facto transfer of power to the revolutionary forces. The ‘Soviet Council of People’s Commissaries,’ led by Lenin, was formed after the armed revolt ousted the temporary government and established the Bolshevik government. During this time, he issued decree after decree regarding the distribution of land to peasants and the handover of factory control to the workers. He signed a peace pact with Germany, which enraged his fellow members of the party. The peace accord fell through, and the Germans launched an invasion on Russia, forcing Lenin to relocate the Soviet Government’s headquarters from Petrograd to Moscow in March 1918.
The end of the war had a significant impact on the Russian economy. He launched the ‘GOELRO’ plan, the first-ever national recovery directive, in order to support its speedy recovery. He also founded a variety of health-care and educational institutions, as well as advocating for women’s civic rights.
The ‘Cheka,’ an emergency commission, was established on December 20, 1917, to defend the ‘Russian Revolution.’ The committee was advertised by Lenin via radio and phonograph.
In the same year, Russia annexed Armenia, Azerbaijan, and Georgia. He defended the annexations, seeing them as a geopolitical measure to safeguard these countries from impending threats.

After suffering serious injuries in two assassination attempts, Lenin issued the death warrants for a number of Tsarist ministers and civil guards whom he felt were plotting against him and his Bolshevik government.
The ‘Red Terror,’ a campaign of mass murders, tyranny, and torture, began in the 1920s and lasted through the 1930s. The ‘White Terror Revolution,’ which targeted anti-monarchists and Jews, posed a threat to this new effort.
The number of individuals slain during the ‘Red Terror Revolution’ was estimated to reach somewhere from 50,000 to one million. To avoid economic collapse, the Bolshevik government began a ‘war communism’ campaign known as ‘prodravyorstka,’ in which farmers’ agricultural produce was taken. This harvest was transferred to war-torn cities and utilized to feed the Bolshevik soldiers.
The white people were enraged by this effort. Lenin, on the other hand, did not stop and continued to implement ‘prodravyorstka.’ The civil war between the Reds and the Whites left Russia in ruins. Nearly five million people died, and millions more were displaced. He ended the ‘war communism’ campaign in 1921 and replaced it with a more liberal ‘New Economic Policy,’ which helped the Russian economy stabilize. Lenin supported a worldwide revolution and established the ‘Comintern,’ an international communist organization based in Moscow, to spread his beliefs.
He also served as the chairman of the ‘Council of Peoples Commissars,’ a key government body that oversaw massive social reforms. After suffering a series of strokes, he resigned from his job in 1923. Major Books One of his most influential works is ‘What is to be Done?,’ which was published in 1863. ‘Imperialism, the Highest Stage of Capitalism,’ ‘The State and Revolution,’ ‘April Theses,’ and ‘Left-Wing Communism: An Infantile Disorder’ are some of his other important writings that pushed ‘Marxism-Leninism.’
The ‘New Economic Policy,’ which was developed to revitalize the Russian economy through foreign commerce, nationalization, and agricultural supply requisition, was one of Lenin’s greatest efforts.

In Siberia, Vladimir Lenin met and married Nadezhda Krupskaya in 1898.
He experienced three strokes during his lifetime, which led to his resignation. The strokes had a significant impact on his right side of the body. In the latter portion of his life, he was left dumb and bedridden until his death on January 21, 1924. He died as a result of a hemorrhagic stroke, it was later discovered.
Millions of mourners from all across the Soviet Union flocked to visit his lifeless remains before they were moved to the mausoleum three days after his death. At his funeral, a number of Communist leaders, including Stalin, Trotsky, and Kalinin, were present. In his honor, Petrograd was renamed ‘Leningrad.’ Until 1991, the name remained the same.
Many Lenin statues have been erected around Europe, and many towns and structures have been named after the Russian revolutionary.
The asteroid ‘852 Wladilena’ was named after him.
Several films and television programs based on Vladimir Lenin’s life have been made, including ‘Three Songs about Lenin,’ ‘All my Lenins,’ and ‘Fall of the Eagles.’

This well-known Soviet leader worked 14 to 16 hours a day. His body was embalmed, mummified, and displayed in Moscow’s Red Square after his death.
A succession of strokes struck this important revolutionary leader. He urged Stalin to poison him a year before his death if his illness worsened.
Without the assistance of a stenographer or secretary, he wrote a lot of books and articles.