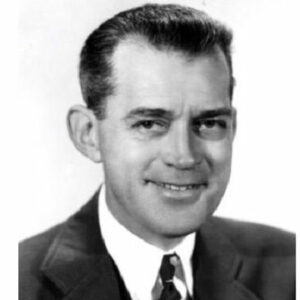 W. S. Van Dyke was an American film director and screenwriter best known for the films ‘The Thin Man’ and ‘San Francisco,’ both of which earned him Academy Award nominations for Best Director. He was also well-known for the musicals he collaborated on with Nelson Eddy and Jeanette MacDonald. A director renowned for his budget adherence and commitment to schedule, he was admired for his craft as well as his dependability. He was born the son of an actress and lost his father on the day he was born. His mother supported herself and her son by working as a touring vaudeville actress. He was introduced to show business at a young age and began performing on stage as a toddler. As a young boy, he appeared in a variety of roles in vaudeville and traveling stock companies. As a teenager, he became restless and worked in a variety of odd jobs before returning to theater. He soon ventured into Hollywood and discovered that directing films piqued his interest. After assisting D. W. Griffith and James Young as a director, he made his directorial debut with ‘The Land of Long Shadows.’ He developed a reputation as a versatile and dependable director over the years, directing several critically acclaimed and award-winning films.

Woodbridge Strong Van Dyke II was born in San Diego, California, on March 21, 1889. On the same day, his father, a Superior Court judge, died. His mother, Laura Winston, was an actress who earned her living as a member of a touring vaudeville troupe.
He was exposed to show business at a young age and began performing on stage at the age of three. As a small child, he traveled with his mother on the vaudeville circuit with traveling stock companies and attended a variety of schools in various cities. His mother also educated him.

He moved to Seattle with his grandmother when he was 14 years old. He attended business school while working as a janitor, waiter, salesman, and railroad attendant.

As a young adult, he worked in a variety of jobs before returning to theater.

In 1915, he made his Hollywood debut. By this time, he had realized that directing was his true passion, not acting. He began his career as an assistant director, assisting directors such as D. W. Griffith and James Young.

In 1917, W. S. Van Dyke directed his first feature film, ‘The Land of Long Shadows.’ He went on to direct five additional films that year, including ‘Men of the Desert,’ ‘Gift O’ Gab,’ and ‘Sadie Goes to Heaven.’

His career flourished over the next few years, and MGM Studios hired the diligent and talented young man in 1926. He quickly established a reputation for his versatility and ability to complete films on time and on budget.

He directed Monte Blue and Raquel Torres in the adventure romance ‘White Shadows in the South Seas’ in 1928. The film was the first MGM production to feature a pre-recorded soundtrack.

He directed the audacious adventure film ‘Trader Horn’ in 1931, which starred Harry Carey and Edwina Booth. It was Africa’s first non-documentary feature film. The film crew encountered numerous obstacles while completing the film, but it was a huge commercial success upon its release.

Along with his professional abilities, Van Dyke was well-known for his generosity of spirit. He frequently hired actors who were unemployed or had fallen on hard times. He also frequently collaborated, uncredited, with other directors on their troubled films. These characteristics helped him establish himself as a beloved and respected figure in Hollywood.

In the early 1940s, W.S. Van Dyke began to experience health problems. His final film, ‘Journey for Margaret,’ was a moving drama about two children orphaned during the war and the childless couple who wish to adopt them.

One of his most well-known films is ‘The Thin Man,’ a comedy-mystery film based on Dashiell Hammett’s novel of the same name. The story of a hard-drinking detective attempting to solve a murder mystery received rave reviews and was a box office smash.

San Francisco (1936), a musical-drama based on the devastating 1906 San Francisco earthquake, was a critically acclaimed film. The earthquake sequence is widely considered to be one of the best special effects sequences ever shot. The film was also a huge commercial success, becoming the year’s highest grossing film.

Van Dyke is honored with a star on the Hollywood Walk of Fame at 6141 Hollywood Boulevard for his contributions to film.

From 1909 to 1935, W. S. Van Dyke was married to Zelda Ashford. Following his divorce, he married Ruth Mannix. The couple was blessed with three children.

In the early 1940s, he was diagnosed with cancer and a serious heart condition. As a devout Christian Scientist, he refused medical treatment for his illnesses. By 1943, his health had deteriorated to the point where he committed suicide on February 5, 1943. He was 53 years old.

The Estimated Net Worth of W. S. Van Dyke is unknown.