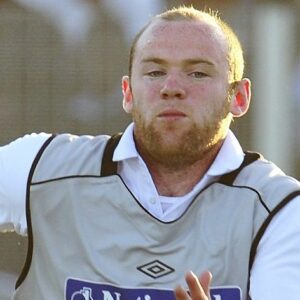 Wayne Rooney is a former English footballer who is usually regarded as the best player in the country. He is presently the manager of Derby County Football Club in the English Football League Championship. He was one of the most well-known football players in the world, winning the ‘England Player of the Year’ award four times. At the age of nine, he scored 99 goals for a local junior league club, earning him a contract with the ‘Everton Football Club.’ He made his professional debut with ‘Everton’ in 2002, and within weeks became the Premier League’s youngest-ever goal-scorer, a record that has since been exceeded. He got a deal with ‘Manchester United’ in 2004 and had remarkable success there. His career at ‘Manchester United’ began with a bang, as he scored an amazing hat-trick in the ‘Champions League’ against ‘Fenerbahce.’ Rooney had 17 goals in 43 appearances by the end of the 2004-05 season. He represented his country in the ‘World Cups’ of 2006, 2010, 2014, and 2018. In five seasons, he helped ‘Manchester United’ win four Premier League titles.

Wayne Rooney was born in Croxteth, England, to Thomas Wayne Rooney and his wife Jeanette Marie on October 24, 1985. He has Irish ancestors. He is the eldest of two brothers.
He went to ‘The De La Salle Academy’ after attending Our Lady and St Swithin’s primary school. He became a fan of his hometown team, ‘Everton,’ when he was a boy, and signed a contract with them in 2002.

In the UEFA Championship League, he made his debut for ‘Manchester United’ in a home game against ‘Fenerbahce’ in 2004-05. He was lauded as a great debutant after scoring a hat-trick in a 6-2 triumph.
He scored twice in his team’s 4-0 win over ‘Wigan Athletic’ in the 2006 ‘League Cup’ final. He was awarded the title of Man of the Match. In the 2005-06 season, he scored 16 goals in 26 ‘Premier League’ appearances.
He didn’t have a great start to the 2006-07 season, but his play improved as the season progressed. He scored a hat-trick against ‘Bolton Wanderers,’ and he had 14 league goals by the end of the season.

Wayne Rooney missed a lot of games in the 2007-08 season due to injuries. He did, however, conclude the season with 18 goals and contributed to his team’s victory over ‘Chelsea,’ as well as helping ‘Manchester United’ win the ‘Champions League.’

When he played against the ‘Blackburn Rovers’ in October 2008, he became the league’s youngest player to reach 200 appearances. In 2009, he scored the season’s final league goal against ‘Tottenham.’ In the 2008-09 season, he has a total of 20 goals.

In an away match against ‘Portsmouth’ in 2009, he scored a hat-trick, his first in three years. He scored four goals in his team’s victory over ‘Hull City’ in 2010. He has never scored four goals in a single game before. In the same season, Rooney scored his 100th ‘Premier League’ goal in a 3-1 win over ‘Arsenal.’

In a 2-1 win over ‘Manchester City’ in February 2011, he scored an overhead volley that proved to be the game-winning goal. He scored his third goal in a 4-0 triumph over ‘Wigan Athletic’ just a few weeks later. He scored his first hat-trick of the season in a 4-2 away win over ‘West Ham United’ in April of the same year.

During the 2011-12 season, Rooney scored a hat-trick to lead his club to an 8-2 victory over ‘Arsenal.’ The hat-opening trick’s goal was also his 150th for ‘Manchester United.’ In his following game, he scored a hat-trick in a 5-0 away win over ‘Bolton Wanderers.’

After the departure of Nemanja Vidi in July 2014, he was named captain of the club. He went on to become the third-highest goal scorer in the ‘Premier League.’ In 37 appearances during the 2014-15 season, he scored 14 goals.
He scored a hat-trick against ‘Club Brugge’ in August 2015, ending an 878-minute scoreless skid. In his 500th game for ‘Manchester City,’ his club lost 2-1 at home to ‘Norwich City.’

He led his team to victory in the 2016 ‘FA Cup’ final against ‘Crystal Palace’ as captain. He tied former ‘Manchester United’ star Bobby Charlton as the club’s all-time leading scorer on January 17, 2017, and eventually eclipsed him with his 250th goal for the club.

In 2017, he signed a two-year contract with his boyhood club, ‘Everton,’ and made his first appearance for the team in a 1-0 win over ‘MFK Ruomberok.’ In a 4-0 win over ‘West Ham,’ he scored his first hat-trick for ‘Everton.’
He signed a three-and-a-half-year contract with ‘D.C United’ of the ‘Major League Soccer,’ and made his debut in a 3-1 win over the ‘Vancouver Whitecaps.’ Because of his outstanding performance with the club and his incredible game-winning pass against ‘Orlando’ in August 2018, he was named the ‘MSL Player of the Year.’

Wayne Rooney agreed to return to England to join the ‘EFL Championship’ side ‘Derby County,’ despite having two years left on his contract with the ‘Major League Soccer’ team ‘D.C United.’ On 2 January 2020, he was elected captain of the team and made his debut, aiding his club to a 2–1 victory over ‘Barnsley.’

He resigned as a competitive player in 2021 and took over as manager of the ‘Derby County’.

In 2002, he was named “The BBC Young Sports Personality of the Year” for being “touted by many as the most potential English football prospect to emerge in recent years.”

Football Association presents this award to excellent members of the England national team.
Rooney’s amazing hat-trick on his debut is without a doubt one of his best. He made his first appearance for ‘Manchester United’ in a ‘Champions League’ match against ‘Fenerbahce’ in 2004, scoring three goals to lead his club to a 6-2 victory.

He scored the opening and final goals in the 2006 ‘Champions League’ final against ‘Wigan Athletic,’ helping ‘Manchester United’ to a 4-0 victory. For his outstanding effort, Rooney was named ‘Man of the Match.’
In a ‘Premier League’ match between Manchester United and ‘Tottenham’ in 2009, his club was behind 2-0 at halftime. In the second half, Rooney fought back by scoring two goals and assisting on two others. His squad recovered to win the game 5-2.

When ‘Manchester United’ and ‘Manchester City’ were tied 3-3 in stoppage time in the 2010 ‘Carling Cup’ semi-final, he scored the game-winning goal. His goal made the score 4-3, allowing his team to advance to the final.

Wayne Rooney is the all-time leading goal scorer for England, having scored 53 goals in 120 international games. He also has the second-most caps for England, after Peter Shilton.

Coleen, his high school sweetheart, is his wife. Kai Wayne (born 2009), Klay Anthony (born 2013), Kit Joseph (born 2016), and Cass Mac Rooney are their four boys (born 2018). His marriage encountered a snag when revelations about his flings with prostitutes surfaced, but the pair has since reconciled and are raising their children happily.

Wayne Rooney’s net worth is estimated to be roughly $170 million.

He is only the fourth player in the history of the Premier League to score a hat-trick in consecutive games.
“Just Enough Education to Perform,” the title of an album by his favorite Welsh rock band, “Stereophonics,” is tattooed on his forearm. He has had two hair transplants because of his hair loss issues. He was known for his fiery outbursts on the field.