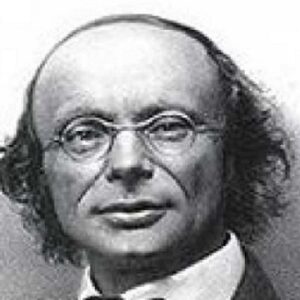 Wilhelm Eduard Weber, a 19th-century German physicist best known for co-inventing the first electromagnetic telegraph, was born in Wittenberg. His family afterwards relocated to Halle, where he completed his official education. He began his career as a Privatdozent at the University of Halle before being invited by Carl Friedrich Gauss to become Professor of Physics at the University of Göttingen. He worked with Gauss to create the first successful long-distance telegraph there. He was demoted after he and six others resisted the King of Hanover’s decision to abolish the constitution. Later, he was appointed as a Professor of Physics at Leipzig University, but was compelled to return to Göttingen after the King’s decrees were overturned. He went on to investigate electrodynamics and the electrical structure of matter in his latter years. He established that the number created by the ratio of electrostatic to electromagnetic units matched the value of the then-known speed of light, working with Rudolf Kohlrausch. He also invented a number of instruments, the most notable of which was the electrodynamometer.

Wilhelm Eduard Weber was born at Wittenberg on October 24, 1804. Michael Weber, his father, was a theology professor at the University of Wittenberg. Only one daughter and four sons of Michael’s thirteen offspring reached adulthood. Wilhelm was his third son to survive.
The eldest of his brothers went on to become a preacher. Ernst Heinrich, his second older brother, went on to become a renowned anatomist and physiologist, as well as a professor at Leipzig University. Eduard, the eldest brother, went on to become a professor of anatomy in Leipzig.
Prussia attacked Wittenberg in 1814. The Weber family’s home was damaged during the raid, and the university where his father was a professor was locked down as the Prussian army occupied the city.
As a result, the family relocated to Halle in 1815, when Michael Weber was appointed as a Professor of Theology at the University of Halle. Wilhelm had previously received his education at home, but he was now enrolled in the Orphan Asylum and Grammar School in Halle.
Wilhelm enrolled in Francke Institute in 1821 to prepare for admission to the University of Halle. He was only seventeen years old at the time, but he was advanced enough to join his second brother, Ernst Heinrich, in his studies on liquid flow, water, and sound waves.
He enrolled at the University of Halle in 1822 to study natural philosophy. Physicist Johann S. C. Schweigger and mathematician Johann Friedrich Pfaff impacted him greatly during this time.
At the same time, he continued to work with his brother Ernst, publishing the results of their experiments in 1825 as ‘Wellenlehre, gegründet auf Experimente.’ Their names became well-known in the scientific community as a result.
He’d also begun work on his doctoral dissertation on reed organ pipes under Professor Schweigger at the time. In 1826, he presented his thesis and received his degree the same year.

Wilhelm Weber became a Privatdozent at the University of Halle in 1827. He then began writing his habilitation thesis on reed organ pipes as coupled oscillators with acoustic coupling of tongue and air cavity, which he finished and submitted the following year.

He was appointed Extraordinary Professor of Natural Philosophy at Halle in 1828. Later that month, he joined Ernst to Berlin, where the brothers attended the Gesellschaft Deutscher Naturforscher und Arzte’s seventh conference.
Wilhelm Weber read a paper on organ pipes in this room. It wowed experts like Alexander von Humboldt, the meeting’s organizer, and Carl Friedrich Gauss, a professor at the University of Göttingen who was interested in geomagnetism at the time.

Weber’s promise was quickly recognized by Gauss, who recognized that the young man would become an excellent coworker. Unfortunately, Weber’s position at Göttingen was not available at the time, so he stayed in Halle and wrote a series of studies on reed organ pipes.

Professor of Physics at the University of Gottingen
When Tobias Mayer Jr. died in early 1831, a vacancy at Göttingen arose, and Weber was offered the position. He started as a Professor of Physics at the University of Göttingen in April.
He excelled at lecturing here, using experiments to illustrate his teachings. He soon understood that if the students could do the experiments themselves, they would benefit more. As a result, he made his laboratory available to his students.

During the next six years, he collaborated closely with Gauss on a number of key articles. The first was named ‘Intensitas vis magneticae terrestris ad mensuram absolutam revocata,’ and it was published in late 1832. They introduced the absolute units of magnetic measurement in it.
The sensitive magnetometers and other magnetic devices created by Weber were critical to the project’s success. Weber’s contributions to this work were highly valued by the scientific faculty, despite the fact that Gauss saw the manuscript.

With the help of Alexander von Humboldt, Gauss and Weber founded the Göttingen Magnetische Verein in 1833, which consists of a global network of magnetic observatories. Their purpose was to take synchronized measurements of the earth’s magnetic field changes. Weber designed a number of instruments in order to obtain precise results.

In 1833, the two scientists also put up a 9000-foot telegraph line between the physics laboratory and the astronomy observatory to permit simultaneous magnetic investigations. It was originally battery-powered, but in 1834, they switched to electric current.

The Magnetische Verein, which they had founded in 1833, became operational in 1836 and lasted until 1842. From 1837 through 1843, it published a number of publications, the majority of which were written by Gauss and Weber. Reports from several centers began to be published later.
Wilhelm Weber worked on the physiology and physics of human locomotion alongside his younger brother Eduard at the same time. The paper was published in 1836 and was titled ‘Mechanik der menschlichen Gehwerkzeuge.’ Unfortunately, he was entangled in a political incident the next year and lost his job.

When Ernst August became King of Hanover in 1837, he repealed the liberal constitution of 1833. Wilhelm Weber, along with six others, wrote the King a letter of protest. They also refused to swear allegiance to the new monarch.
The King retaliated by dismissing all seven—later known as the ‘Göttinger Sieben’—from their offices. Weber’s friends attempted to have him reinstated, but he was forced to make a public retraction, which he refused to do.
Wilhelm Weber continued to work for the Göttingen Magnetische Verein despite his unemployment, and from March to August 1838, he traveled to Berlin and then London to try to expand the network. Later, he traveled to Paris, where he met a number of prominent scientists.

Leipzig is a city in Germany.

Finally, in 1843, when University of Leipzig Professor G. T. Fechner retired early owing to partial blindness, Weber was appointed to his Chair and became Professor of Physics at Leipzig. Both of his brothers were working at the same institution at the time.
He stayed in Leipzig until 1849. He began working on electrical force in 1832, while still a professor at Göttingen. He went back to work and came up with his law of electrical force. The first of his ‘Elektrodynamische Massenbestimmungen’ was published in 1846.

The year 1848 saw a huge rebellion in Hanover, forcing the monarch to reevaluate several of his choices, including Wilhelm Weber’s reinstatement at the University of Göttingen. As a result, Weber returned to his old school in 1849.

J.B. Listing was holding the position of Professor of Physics at the time. Listing kept the chair at Weber’s request, and Weber was named Director of the Astronomical Observatory. He continued to work in the fields of electricity and magnetism, however.
In 1854, Weber began working with Rudolf Hermann Arndt Kohlrausch, an Associate Professor at the University of Marburg at the time. They demonstrated in 1856 that the number produced by the ratio of electrostatic to electromagnetic units corresponded to the value of the known speed of light at the time.
Weber became interested in electrodynamics and the electrical structure of matter as a result of this. During the latter part of his career, astrophysicist J. K. F. Zöllner of the University of Leipzig was his closest partner. They collaborated on the topic of electrical conductivity.

In the 1870s, Weber officially retired from the University of Göttingen. Eduard Riecke, Weber’s assistant and successor, continued his work and later created the electron theory of metals based on Weber’s concepts.
When J. K. F. Zöllner died in 1882, Weber took up his ideas and began to investigate the interaction of atoms in the two types of electricity. In his final effort, ‘Elektrodynamische Maassbestimmungen,’ he left the result of his study in manuscript form.

Wilhelm Weber’s theoretical contributions are titled ‘Elektrodynamische Maassbestimmungen’ and consist of eight large pieces. Seven of these books were published between 1846 and 1878, while the eighth, which had been left in manuscript form, was published after his death.

He is most known for his work on the ratio between the electrodynamic and electrostatic units of charge, which he did with Rudolph Kohlrausch. The work, which was published as a paper in 1856, was essential in the development of Maxwell’s idea of light as an electromagnetic wave. Furthermore, it is in this publication that the term “c” for the speed of light is first used.

He is well known for his work on the electromagnetic telegraph. In 1833, he partnered with Gauss to create one of the first practical long-range telegraphs.

Weber also contributed to the development of a number of instruments, the most notable of which was his work on the electrodynamometer. He laid forth the essential theory in 1848, which Werner von Siemens eventually utilized to construct the real device.

Weber was elected to the Royal Swedish Academy of Sciences as a foreign member in 1855.
The Royal Society of London awarded him the Copley Medal in 1859 for his “investigations included in his Maasbestimmungen and other researches in electricity, magnetism, and acoustics.”
He was awarded the Matteucci Medal, an Italian physicist prize, by the Italian Society of Sciences in 1879.

Wilhelm Weber was a bachelor who never married. His sister, and then his niece, were in charge of his household. He was a straightforward individual who enjoyed trekking. He traveled by foot for the majority of his journeys.
Weber died quietly in his Göttingen garden on June 23, 1891. He was 86 years old at the time. He was laid to rest in Göttingen’s historic Stadtfriedhof (City Cemetery).
In his honor, the ‘weber,’ the SI unit of magnetic flux indicated by Wb, was named after him.

Wilhelm Weber is estimated to have a net worth of $1 million to $8 million USD. From his major job as an officer, he has amassed a sizable fortune.

F. E. Dahlmann, W. E. Albrecht, Jakob Grimm, Wilhelm Grimm, G. Gervinus, and G. H. von Ewald were the other members of the ‘Göttinger Sieben.’ Jacob and Wielham Grimm, also known as the Brothers Grimm, were among them. They were famous fairy story and folk tale writers.