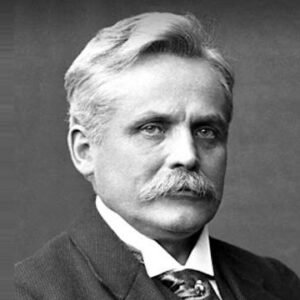 Wilhelm Wien was a German physicist who did important work in thermal radiation and won the Nobel Prize in Physics for it. He is best known for the Wien’s distribution law and the Wien’s displacement law (also known as the Wien approximation). Even though he learned at home as a child and was kicked out of his first school for not doing well in school, he did important work in the field of physics. After getting his Ph.D. under the guidance of the famous physicist Herman Helmholtz, he worked as his assistant and later taught physics at some of the best universities in the world. He did groundbreaking research in the field of thermal radiation and proposed laws about the relationship between a body’s wavelength and temperature. He also explained what a blackbody is. A blackbody is a body that absorbs all radiation and gives off heat. He helped come up with a correct expression for the blackbody radiation in the photon-gas limit. He won the Nobel Prize in Physics for his “displacement law” about how a perfectly efficient blackbody gives off radiation. He also made important discoveries about cathode rays, X-rays, and canal rays (positively charged atomic beams). His amazing discoveries were very important to the growth of quantum mechanics.

On January 13, 1864, he was born in Geffken, East Prussia, near the small town of Fischbach, to Carl Wien, a landowner, and Caroline Gertz, his wife. He was the only kid they had.
When he was a child, his family moved to a small farm in Drakenstein. He learned at home until he was eleven years old. His parents paid for a private teacher to teach him, French.

In 1879, he went to school in Rastenburg, but he was soon kicked out because he wasn’t doing well in school. Later in 1880, he went to the city school in Heidelberg, where he stayed until 1882 when he graduated.

From 1883 to 1885, he went to school at the University of Berlin and worked in the lab of Hermann von Helmholtz, a German physicist, and mathematician.

He got his Ph.D. in physics from the University of Berlin in 1886 with a paper called “The Diffraction of Light on Photographically Reduced Lattices.”

After getting his Ph.D., he went back to his family farm, which had been badly damaged by a fire, to help fix it up. During the next four years, he tried to fix up the farm while also studying physics on his own. In 1890, he was forced to sell the land because it was in bad shape.

In 1890, Helmholtz made him his assistant at the State Physical-Technical Institute in Charlottenburg, which had just been set up.
He taught at the Rheinisch-Westfälische Technische Hochschule Aachen and the University of Giessen from 1896 to 1899.

In 1900, Wilhelm Röntgen, another German physicist, asked him to take over as a joint professor of physics at the University of Würzburg.

From 1906 until his death in 1928, he was also the co-editor of the journal Annalen der Physik.

“Wien’s Displacement Law” is his most famous contribution to the study of thermal radiation. It shows a relationship between the temperature of a Planck Blackbody and the wavelength that shows the most radiated power. It says that as the temperature goes up, the blackbody’s light waves get shorter.

He also came up with a theory called “Wien’s Energy Distribution Law” that gave a graphical explanation of the energy distribution curve. The theory was correct, but only for wavelengths that were short. Later, Max Planck fixed the theory so that it worked for both short and long wavelengths. This was called “Planck’s law,” and it also led to the development of quantum theory.

In 1911, he won the Nobel Prize in Physics “for his discoveries about the rules for how heat travels.”

In 1898, he married Luise Mehler, an Aix-la-Chapelle woman he had been with for a long time. They were lucky to have four kids. Their names were Gerda, Hildegard, Karl, and Waltraut.

During his time at Würzburg, he went on many trips to Spain, England, Italy, and Greece, among other European countries. At Würzburg, he also had time to study History and the Arts, which were things he had always been interested in.

Wilhelm’s main source of income is Celebrity. 2019 estimated net worth has $1 million.