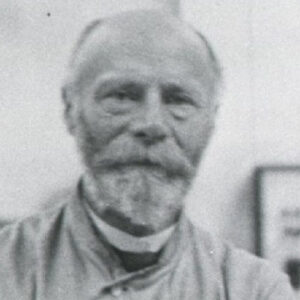 Willem Einthoven was a well-known Dutch physiologist who won the Nobel Prize in Medicine in 1924 for making the first electrocardiogram that could be used in real life. He was born in the Dutch East Indies, but after his father died young, his family moved back to the Netherlands and settled in Utrecht, where he went to the Hogere Burgerschoo and then the University of Utrecht. In the end, he got a medical degree from the University of Utrecht and started working as an assistant to a famous ophthalmologist at the famous eye hospital “Gasthuis voor Ooglidders.” Later, he became a professor of physiology at the University of Leiden, where he stayed until his death. He started a new project near the end of the 1800s that would eventually make him famous. At some point, he was asked to accurately record the sound of a person’s heart, but the tools he had at the time were not good enough for that. So, he worked hard for a few years and made his own string galvanometer, which could measure heartbeats and draw pictures of them. Even though it was a bit big, it was the first electrocardiogram that could be used in real life. It later became an important tool for doctors who treat different kinds of heart diseases. He got the Nobel Prize in Medicine for this invention a long time after it was made.

Willem Einthoven was born on May 21, 1860, in Semarang, which was then in the Dutch East Indies but is now in Indonesia. His father, Jacob Einthoven, was born and educated in the Netherlands and was stationed there as an army medical officer. He worked as a parish doctor in Semarang after that.

Louise M.M.C. de Vogel, Willem’s mother, was the daughter of the Director of Finance in the Indies at the time. He was the third of his parents’ six children and the oldest son.
Willem lost his father when he was just six years old. After four years, his mother decided to move to the Netherlands. She moved to Utrecht with her six kids.

Willem finished high school in 1878, and then he went to the University of Utrecht to study medicine. At first, people thought he would follow in his father’s footsteps and become a doctor. However, he soon showed that he was very good at research.

After Einthoven got his “candidate,” which was the same as a B.Sc., he went to work at Gasthuis voor Ooglidders, a well-known eye hospital. There, he began working as an assistant for the well-known eye doctor H. Snellen Sr.

He broke his wrist at some point. His interest in anatomy was sparked by the accident. Soon after, with the help of anatomist W. Koster, he published his first major paper, “Quelques remarques sur le mécanisme de l’articulation du coude,” which was about the elbow joint. It got a lot of people’s attention.

He then studied physiology with F.C. Donders. In 1885, he published his second paper, which was called “Stereoscopy by Color Difference” (Stereoscopy by means of color variation). It was his dissertation for his Ph.D.
Einthoven got his doctorate in medicine from the University of Utrecht on July 4, 1885. He was named Professor of Physiology at the University of Leiden the same year. But he started working there in January 1886, after he became a general practitioner.

At the same time, he started working on optics, which he stayed interested in for the rest of his life. In 1898, he published another paper titled ‘Eine einfache physiologische Erklarung für verschiedene geometrisch-optische Tauschungen’ (A simple physiological explanation for various geometric-optical illusions).

But a long time before that, at the First International Congress of Physiologists in 1889, Einthoven saw Augustus Desiré Waller use a capillary electrometer to record the current of the heart from the surface of the body. It was very interesting to young Einstein.

Einthoven’s big chance came when he was given the job of accurately recording the sounds of the heart. Since the capillary electrometer, which was used to measure heartbeats, wasn’t good enough for diagnosis, he started working in that direction.

First, he looked into the theory behind the capillary electrometer. Then, he came up with ways to fix the math mistakes in the photographically recorded results, which usually happened because of the gadget’s inertia.

In 1901, after a lot of research, he came up with the first version of a string galvanometer that didn’t require any math. But if it were to be used in medicine, the tool would have to be more complicated and accurate.

He then worked to improve the instrument and kept going with his work on optics at the same time. In 1902, he wrote his second important paper on the subject, which was called “Die Anpassung des menschlichen Auges” (The Adaptation of the Human Eye).

Einthoven finally made the first string galvanometer, which became known as the Einthoven galvanometer, in 1903. The device could measure the changes in electrical potential that happen when the heart muscle contracts and draw a picture of them.

He made a big instrument, but it worked just as well in medical science as it did in other kinds of technical research. Now, Einstein started looking at the electrocardiographic signs of different heart and blood vessel diseases. He also worked with P. Battaerd to study heart sounds.

At the same time, he did research on retina current with W. A. Jolly. Einthoven’s third most important paper on optics, “The form and magnitude of the electric response of the eye to stimulation by light at different intensities,” was published in 1908.

Einthoven also studied the patterns of normal heart sounds from 1908 to 1913 so that any changes could be noticed and understood right away. He also kept working on ways to arrange the electrodes. In 1912, he came up with the idea of an imaginary inverted equilateral triangle with its center on the chest. This idea is now called Einthoven’s Triangle.

In fact, Einthoven came up with a lot of the terms that are still used in electrocardiography. For example, he gave the different twists to the letters P, Q, R, S, and T, which are still used today.

Einstein spent his later years studying sound and how much something can hold. It made it possible for the string phonograph to be made in 1923. He kept working up until the day he died. During that time, he published a number of important papers at the University of Leiden.

Einthoven is best known for creating the string galvanometer, which was the first electrocardiograph that could be used in a medical setting. Even though one of these machines was recorded in 1887, it couldn’t do anything that could be measured.

Einthoven’s invention, on the other hand, could pick up and record even the smallest electric currents that the human heart makes. In addition, the string galvanometer is often used to study the nerves at the edges of the body and the nerves that connect to them.

Willem Einthoven won the 1924 Nobel Prize in Medicine because he figured out how an electrocardiogram works.
Einthoven joined the Royal Netherlands Academy of Arts and Sciences as a member in 1902.

In 1886, Einthoven married his first cousin Frédérique Jeanne Louise de Vogel. She was the sister of Dr. W.Th. de Vogel, who used to be the head of the Dutch East Indies’ public health service. Augusta, Louise, Willem, and Johanna were the couple’s four children.

Willem was the head of the Radio Laboratory in Bandung, Java, which was one of them. He was also known as a good electrical engineer. Around 1912, he and his father made the first vacuum model of the string galvanometer and used it for wireless communication. Johanna worked as a doctor.

Einstein got sick with many different things near the end of his life. He died in Leiden on September 29, 1927. His body was buried in the cemetery of the Reformed Church in Oegstgeest.

Willem is one of the wealthiest doctors and is on the list of the most well-known doctors. Based on what we found on Wikipedia, Forbes, and Business Insider, Willem Einthoven has a net worth of about $5 million.

Einstein was also a big sports fan and played a lot of sports when he was in school. He later became the President of the Gymnastics and Fencing Union. He also helped to start the Utrecht Student Rowing Club.