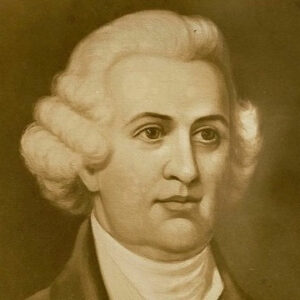 William Hooper was a lawyer and politician who signed the United States Declaration of Independence on behalf of the state of North Carolina. He was supposed to follow in his father’s footsteps as the son of a preacher but instead chose to pursue a career in law. He went on to become a highly successful and rich lawyer who was well-liked by both his clients and peers. He was appointed as the Deputy Attorney General of North Carolina after serving as the Deputy Attorney General of the Salisbury District. He was initially a loyalist who supported the British colonial authority, but after a series of events, he changed his opinion and became a passionate supporter of the independence cause. He had always been interested in politics, but he first became involved when he was elected to the Provincial Congress Assembly to represent the Scots settlement at Cambelltown. His extensive understanding of the legislation and judicial operations was invaluable to Congress, and he even used his personal money to help the cause of independence. Hooper was a genuine patriot, refusing to compromise his beliefs even after the British destroyed his home and possessions. After the state gained freedom, he continued to serve in the North Carolina Assembly for many years.

William Hooper was the son of William Hooper, a Congregational clergyman, and Mary Dennie. He was the eldest of five siblings.

He had his early education at the Boston Latin School, where he was taught by John Lovel, the school’s principal.
In 1757, he enrolled at Harvard College and graduated with a B.A. in 1760. In 1763, he got his M.A. in theology.

His father had hoped that his son would become an Episcopal pastor, but William was more interested in becoming a lawyer. He began his legal studies under the guidance of James Otis, a strongly patriotic barrister who is said to have affected his views on the liberation movement.

In 1764, he came to North Carolina to practice law because there were already so many lawyers in his city. He became a lawyer at the Cape Fear Circuit Court.

He quickly rose through the ranks of the legal profession and was chosen recorder of the borough in 1766.
In 1769, British Governor William Tyron named Hooper as the King’s Deputy Attorney General in the Salisbury District Court. In the beginning, he was a loyalist who totally supported British rule.

The regulators who took Hooper through the streets during the Hillsborough riots in 1770 were not pleased with his appointment.

As a member of the Governor’s militia, Hooper fought at the Battle of Alamance in 1771. This battle is regarded as the opening of the American Revolutionary War.

By this time, his opinions on British control had begun to shift, and he was eager to join the American patriotic movement. Because of his previous commitment to the British, he was initially treated with suspicion, but he was finally accepted.

He was elected as a representative for the Scots settlement of Cambeltown in the North Carolina General Assembly in 1773. He met many notable people there, including Allen Jones, Samuel Johnston, and John Harvey.
Hooper was chosen to represent North Carolina in the Continental Congress alongside John Penn and Joseph Hewes.

In September 1774, the First Continental Congress met in Philadelphia. The members voted to adopt the Continental Association, and committees were formed in each county to enforce the Association’s terms.

Hooper was one of eight members of the Wilmington Committee of Safety, which was founded in November 1774 to carry out the requirements of the Continental Association. The committee was in place until 1776.

On 4 July 1776, he was unable to attend the vote of independence or the declaration, but he was present to sign the Declaration of Independence on 2 August 1776, along with the majority of the other signers.

In December 1776, he was named chairman of the committee charged with designing a Great Seal for the newly formed state of North Carolina. Other notable members of the committee included Joseph Hewes and Thomas Burke.

In 1777, he became ill with malaria and withdrew from the United States Congress.
He resumed his law business in Wilmington and continued to serve on several committees in the General Assembly as a member of the borough of Wilmington.

William Hooper is well-known as one of America’s Founding Fathers, having signed the Declaration of Independence in 1776. He was one of the signers who had to face several emotional, bodily, and financial difficulties as a result of his commitment to the cause of independence.

On August 16, 1767, William Hooper married Anne Clark. Anne came from a well-to-do family. The couple had a number of children, but only three of them lived to adulthood.

The British burned down Hooper’s house and estate in 1781, forcing him to seek sanctuary with his friends while his wife moved the children to her brother’s place. In 1782, the family has reunited after a year apart.

In his later years, he suffered from terrible health and died at the age of 48.

The estimated net worth of William Hooper is unknown.

He was a fair gentleman who had little trouble forgiving people who had wronged him.
He was known for being a wonderful host who lavished his visitors with attention.