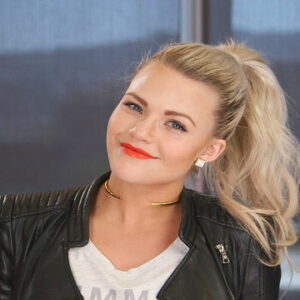 American professional dancer, actress, and ballroom and Latin dancer Witney Carson. Witney was reared in Utah and began taking dancing lessons when she was 3 years old. She had a natural ability to dance, and it took her little time to develop into an elegant professional dancer. At the age of 18, she first rose to fame when she placed second among the female contestants in the ninth season of “So You Think You Can Dance.” In the sixteenth and seventeenth seasons of “Dancing with the Stars,” she participated as a troupe dancer. The next season, she partnered with celebrities who were contestants on the show as professional dancers. She and Alfonso Ribeiro, her dance partner, were named the winners of the 19th season of “Dancing with the Stars.” She received a “Emmy” nomination for her powerful performance and superb choreography. Through several theatrical performances throughout the years, Witney has established herself as a skilled professional dancer. She has collaborated with well-known celebrities including Travis Wall, Mia Michaels, and Tyce Diorio.

On October 17, 1993, Witney Carson was born in Utah to parents Tyler and Jill Johnson-Carson. In American Fork, Utah, she was raised. She was the oldest of the family’s four kids. When Witney was just 3 years old, her mother saw that she was interested in dance and signed her up for dance lessons. Starting early allowed her enough time to become proficient in many dance styles before she reached adolescence.

Although Witney’s mother made sure her daughter received instruction in both modern and folk dance styles, Utah was known for its jazz and ballet performers. This inspired Witney to learn several dance styles when she was younger.

She wasn’t initially all that interested in ballroom dancing. She eventually became an expert at this style of dance nevertheless. She was fascinated by couples who performed ballroom dancing, which eventually motivated her to sign up for lessons. Rick Robinson, one of the most well-known figures in the ballroom dancing world, trained her.
She used to practice for six to eight hours every day. She managed a workout schedule at the same time to maintain her fitness. She obtained her diploma from “American Fork High School.” She performed all over the world while still in high school and received numerous honors. She applied for the ninth season of “So You Think You Can Dance” at the age of 18, right after graduating from high school, and her life was forever changed.

The popular “Fox” program “So You Think You Can Dance” came to Witney’s hometown for auditions when she was 18 years old. She gave an audition and was chosen to take part in the season. She advanced rapidly to the top 20 finalists. She was matched with outstanding dancer Chehon Wespi-Tschopp for the final round.

She and her partner were chosen as two of the top ten finalists. The finalists had to switch partners every week at that point. By collaborating with a new partner every week, she made it to the top 6. She was, however, eliminated in the episode that aired on September 5, 2012, and finished the competition as the second female runner-up.
Even though she was unable to win the competition, she was already a relatively well-known celebrity by the time the show was through. At that time, a number of other dance programs were broadcast. This gave her sufficient opportunities to sustain her notoriety in the ensuing years.

She became a troupe dancer for the sixteenth season of ‘Dancing with the Stars,’ a well-known dance reality show, in 2013. She not only choreographed but also performed. She was hired to perform the same duties for the show’s upcoming season as she honed her choreography skills.

But in the 18th season, she received a promotion to professional dancer and choreographer, and she was matched with a famous person. She partnered with singer Cody Simpson for the duration of the competition, but in April 2014, they were both eliminated. By the end of the season, they were ranked ninth, which was excellent for a debutant.

Witney was partnered with actor Alfonso Ribeiro in “Dancing with the Stars” season 19. The couple gave an outstanding performance all the way through the competition, and in November 2014, they were named the season’s winners. As a result, Witney triumphed in her second appearance on the show as a professional dancer.
For the twentieth season of the show, Witney was matched with reality TV star Chris Soules. The duo was the eighth couple to be removed from the competition as it ended in fifth place.

For Witney and her brand-new romantic partner, singer and actor Carlos PenaVega, the twenty-first season was a little better. The couple advanced to the finals but were defeated on Night 1 and ultimately finished in fourth place.
The following few seasons saw a severe decline in Witney’s performance. She was matched with ‘National Football League’ star Von Miller in the 22nd season. The couple had a difficult time making it to the seventh week and was eliminated. They came in at number eight in the final standings.

Witney’s worst season was the twenty-third. Rapper Vanilla Ice was connected with her. The fourth week of the season saw them suffer a double elimination. In the end, they were ranked at position 10 in the final standings.
She was paired with comedian Chris Kattan in the following season, and they were the first couple eliminated in that season. However, Witney’s reputation was somewhat improved in the twenty-fifth season. Together with her partner, actor Frankie Muniz, she successfully completed the final stage to place third.

In addition to participating on reality TV, Witney made a 2015 appearance in the dance movie “Dancin’: It’s On!” She portrayed “Jennifer Gabriella August,” a character who falls in love with a man who works at her father’s hotel, in the film. The movie received favorable reviews and took home prizes at the 2015 Widescreen Film & Music Video Festival for “Best Director,” “Best Editing,” and “Best Music Score.”

In addition, Witney’s performance on “Dancing with the Stars” earned her a nomination for “Outstanding Choreography” at the 2015 Primetime Emmy Awards. At the 2016 “Industry Dance Awards,” she was nominated for the title of “Favorite Dance Idol.”

Long-term partner Carson McAllister was in a relationship with Witney Carson. In October 2015, she made the news that she was going to marry him. She wed him on January 1, 2016, and they have one child. The Salt Lake City wedding ceremony was attended by several of her friends and ex-consorts from her well-known reality series.
Witney maintains a blog where she engages with her followers. She divulges details about her personal life, food, makeup routine, and daily activities.

Witney Carson’s net worth is $300,000. Witney Carson is an American dancer, actress, and choreographer. Witney Carson, who specializes in Latin ballroom dancing, is best known for her appearances on the ABC series Dancing With the Stars and the popular television programs So You Think You Can Dance. In Season 16, she began her career with Dancing With the Stars, and in Season 18, she was promoted to professional dancer. For Season 19 of Dancing With the Stars, she made a comeback as a professional dancer and is partnered with Alfonso Ribeiro. Carson was born in American Fork, Utah, and began her dance career at the age of three. She trained in a variety of dance forms, including ballet, jazz, hip hop, ballroom, and tap, among others. Witney Carson has competed and performed across the globe, earning numerous accolades and scholarships in the process.