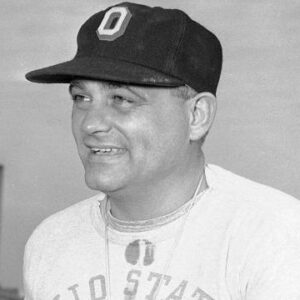 Woody Hayes was a famous American football player and coach who gave his life to the game. As a child, he was very smart and good at sports from the start. Very early in his life, he was hired as an assistant coach because he knew everything there was to know about the rules and how to play the game. After World War II, he was first hired by Denison University, where he was the head coach for two years, from 1946 to 1948. In 1949, Miami University asked him to join their team. Under his direction, the team won a number of games, and he was then hired as the head coach at Ohio State University. From 1951 to 1978, he kept doing his job of leading the team to victory after victory. During his 28 years coaching the Ohio State University team, they won five national titles, and 13 Big Ten Conference titles, and had a record of 205-61-10. In college football, he has won 238 games, lost 72, and tied 10 times. He was also a teacher, teaching both physical education and the history of the military.

Woody Hayes was born in Clifton, Ohio, on February 14, 1913. His parents were Wayne B. and Effie Hayes. He was the baby of the family.

He went to Newcomerstown High School for his early education. After that, he went to Denison University. He was a very smart and talented child who played center in high school and then tackle for coach Tom Rogers in college games.

John Brickell quit as head coach at New Philadelphia High School, which was good news for Hayes because he was then promoted to the position. In his first two seasons as head coach, the team went 17–2–1 and won the league championship.

In 1941, he was forced to join the US Navy. During World War II, he got a promotion and became a Lieutenant Commander.
After World War II ended, Denison University planned to start up its football team again. For the same reason, they gave him the job of head coach, which he was happy to take.

In 1946, he started working at Denison University as the head coach of the football team. He needed time to get used to his new job, which hurt the team’s performance. During his first year as coach, the team only won two games.

The last game against Wittenberg was the start of good things for him and the university team. The win started a 19-game winning streak, which automatically raised the team’s standing and the coach’s reputation in the gaming circuit.

Because the team did so well, he got an offer from Miami University to be their head coach, which is a very good job. The job was the only one of its kind and was known as the “Cradle of Coaches” because it was where many great coaches got their start.

In the meantime, he went back to school and enrolled at Ohio State University to get a Master’s degree in educational administration. In the year 1948, he got the same thing.

He became rivals with Gillman, who had been the coach at Miami but left to become the coach at the University of Cincinnati. At the Salad Bowl, he led the team to a win over Arizona State University. It was because of this win that Ohio State asked him to be their head coach in 1951.

Not only was he offered the job of head coach at Ohio State University, but he was also offered the job of a professor of physical education because of how well he did in school. He even made his first-year football players take English and vocabulary classes.

In addition to the three national titles that everyone agreed on, the Ohio State Buckeyes also won two national titles that nobody agreed on in 1961 and 1970. They also won 13 Big Ten Conference titles and went to 8 Rose Bowls.
He was one of the first coaches to get African-American players on the team. He had a conservative way of coaching.

Besides players, he was also the first coach to hire African-American assistant coaches.
During his time as head coach, about 58 of the players he coached were named All-American. Also, many football coaches, including Lou Holtz, Bill Arnsparger, Bill Mallory, Dick Crum, Bo Schembechler, Ara Parseghian, and Earle Bruce, who took over for Woody, worked with him at different times.

During his years as a coach, he got into a fight more than once and was involved in a lot of controversies. These were mostly caused by his short temper and actions he couldn’t stop when angry.

Hugh Hindman, the athletic director at Ohio State University, told him to quit after the 1978 Gator Bowl incident, in which he yelled at the referee and hurt one of his own players when the player tried to help.

He turned down the offer, and because he had hit a college athlete, he was fired from his job. Earle Bruce took over as head football coach at Ohio State University after him.
He stayed at Ohio State as a Military History professor until the day he died.

He got married to Anne Gross in the year 1942. The couple was lucky to have a son, Steve, who became a lawyer and then a judge.

In the last years of his life, his health got worse and worse. He died of a heart attack on March 12, 1987, the day he took his last breath. He was laid to rest in Columbus, Ohio, at the Union Cemetery.

Woody is one of the wealthiest Football Coaches, and he is also on the list of the most popular Football Coach. Based on what we found on Wikipedia, Forbes, and Business Insider, Woody Hayes is worth about $1.5 million.