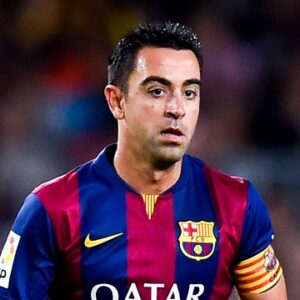 Xavi is a Spanish professional footballer who now plays as a central midfielder for Al Sadd in Qatar, having formerly represented FC Barcelona and the Spanish national team. He studied team spirit at the Barcelona youth academy, La Masia, since he was eleven years old, thanks to his father, a professional first division player. He went on to assist Barcelona win a slew of trophies, including eight La Liga titles and four Champions League crowns. He is the first Barcelona player to reach the milestone of 150 international appearances. He won the U-20 World Cup with the junior Spanish squad in 1999, as well as the Olympic Silver Medal at the 2000 Olympics. His ability to make flawless passes helped the Spanish national team win the 2010 World Cup and the 2008 and 2012 Euro Cups. He is recognized as the greatest Spanish player of all time and as one of the finest midfielders of all time.

Xavier Hernández Creus was born in Terrassa, Catalonia, on January 25, 1980. Joaquim, his father, is a former professional footballer who played in the first level for Sabadell.
At the age of eleven, he joined Barcelona’s La Masia program and swiftly advanced through the ranks, earning a berth in Josep Maria Gonzalvo’s Barcelona B team, which gained promotion to the second level.
Pep Guardiola of Barcelona, as well as English midfielders Paul Scholes, John Barnes, Paul Gascoigne, and Matt Le Tissier, inspired him as a child.

On May 5, 1998, Xavi made his first-team debut against Lleida, and three months later, in the Super Cup final versus Mallorca, he scored his first goal.
He made his La Liga debut against Valencia on October 3, 1998, and was voted the ‘Breakthrough Player of the Year’ in 1999 after winning the Spanish title.
During the next season, he became the team’s primary playmaker, scoring 7 goals and adding 20 assists over the next two seasons.

He was the team’s vice-captain during the 2004-05 season, when Barcelona won La Liga and the Supercopa de Espana, and in 2005 he was voted the ‘La Liga Spanish Player of the Year.’
In the next season, he suffered a leg injury and had to sit out for four months before returning to see his club win the 2006 UEFA Champions League. That season, Barcelona also won La Liga and the Supercopa de Espana.
During the 2008-09 season, he pondered a move to Bayern Munich, but was persuaded to stay at Barcelona by coach Pep Guardiola. He finished the season with 29 assists, including 20 in La Liga, making him the league’s leading assist provider.

In the 2009-10 season, he set a new record for most assists and helped Barcelona win the La Liga title. In the 2010 FIFA Ballon d’Or, he finished third behind Barcelona colleagues Lionel Messi and Andrés Iniesta.
He surpassed Migueli, who had previously held the record with 549 appearances, as the player with the most appearances for Barcelona in early 2011. They won the Champions League final against Manchester United that year, as well as the FIFA Club World Cup final against Santos of Brazil, in which he scored and assisted.

In terms of goal scoring, the 2011-12 season was his best of his career. He scored ten goals in La Liga, one in the FIFA Club World Cup, and two in the Copa del Rey, which they won as well.
He played his final season at Barcelona in 2014-15, during which he earned his 500th La Liga appearance. During the season, he served as captain of the team and came on as a substitute in their Champions League final victory over Juventus.

Xavi signed a three-year contract with Qatari club Al Sadd in mid-2015, and made his debut for the squad on September 13, 2015, in a 4-0 win over Mesaimeer. His first trophy with the team came in the 2017 Qatar Cup.

Xavi was a member of the 1999 Spanish U-20 World Cup winning team. The next year, he made his senior national team debut and went on to play 133 games for Spain. He was a key figure in Spain’s undefeated run to the UEFA Euro 2008 Championship, which they won for the second time in a row following 1964. He scored the game’s opening goal in a 3-0 semi-final triumph over Russia and assisted on the game’s only goal in the final against Germany, earning him the title of ‘Player of the Tournament.’

In 2010, he played a key role in Spain’s first World Cup victory, completing 599 passes with a 91 percent success rate. He had the best ball possession in the tournament and assisted on several goals, including one against Germany in the semi-finals for which he was dubbed ‘Man of the Match.’

In a 4-0 win over the Republic of Ireland in the UEFA Euro 2012 group stage, he made a record 136 passes with a success percentage of 94 percent. In the final, he assisted on two goals in a 4-0 triumph over Italy, making him the first player to assist on goals in two European Championship finals. He was the most successful player in Spanish history when he joined the national squad for the 2014 World Cup, but his team was eliminated at the group stage. He announced his retirement from international football shortly after, bringing an end to a 14-year career.

In 2008-09, Xavi was voted UEFA Club Midfielder of the Year, while in 2008, he was named UEFA European Championship Player of the Tournament. In 2010 and 2012, he received the ‘Prince of Asturias Award for Sports’ twice.

He was named to the ‘FIFA World Cup Dream Team’ in 2010 after winning the ‘World Soccer Player of the Year’ award. Between 2009 and 2011, he finished third in the FIFA Ballon d’Or three times in a row.

Following Spain’s Euro 2012 victory, Xavi began dating fashion journalist Nria Cunillera. In July 2013, they married in the Marimurta Botanical Gardens in Girona, and their first daughter Asia was born on January 3, 2016.
He is a brand ambassador for Adidas, a German sportswear company for which he has been in numerous advertisements. In November 2014, he was one of the elite footballers chosen for FIFA’s “11 against Ebola” campaign.

Xavi gained the nickname “The Puppet Master” because of his ability to execute precise passes and maintain possession of the ball, which allowed him to dominate a large number of matches. Along with teammates Lionel Messi, Andrés Iniesta, and Sergio Busquets, he was an integral part of Barcelona’s tiki-taka style of play.

Xavi Hernandez has a net worth of $40 million dollars.