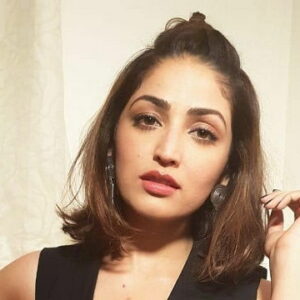 Yami Gautam is a Telugu, Kannada, Punjabi, Malayalam, and Tamil actor who has acted in a number of films. She began her career on television before moving on to Bollywood with the film ‘Vicky Donor.’ Her future films, however, did not perform well at the box office. Yami made headlines for her rumored affair with co-star Pulkit Samrat rather than her flicks. ‘Badlapur’ and ‘Kaabil’ were important parts for her, but it was ‘Uri: The Surgical Strike’ that propelled her career forward. Yami is ecstatic to be associated with the film. She’s also modeled for a number of companies.

Mukesh and Anjali Gautam gave birth to Yami on November 28, 1988, in Bilaspur, Himachal Pradesh. Surilie, her younger sister, and Ojas, her younger brother, all grew up in Chandigarh.
Yami originally enrolled in college to get a bachelor’s degree in law (honors) with the goal of joining the ‘Indian Administrative Services’ (IAS). She eventually abandoned her goals and relocated to Mumbai to pursue a career in acting. She later completed a part-time graduation program in Mumbai.
Yami was summoned for an audition on her father’s advice and was chosen by TV series director Partho Mitra.

In 2008, Yami made her acting debut in the NDTV Imagine series ‘Chand Ke Paar Chalo’ and ‘Raajkumar Aaryyan.’ She made her debut as ‘Leher Mathur Vajpayee’ in the ‘Colors’ love drama ‘Yeh Pyar Na Hoga Kam’ in 2009. She then starred in 2010 on the reality series ‘Meethi Choori No. 1’ and ‘Kitchen Champion Season 1’. She also made an appearance in an episode of the ‘CID’ police procedural (2013).

Yami made her big-screen debut as ‘Mahalakshmi’ in the Kannada film ‘Ullasa Utsaha’ in 2009. She went on to play Rabiha in the Punjabi film Ek Noor and Archana in the Telugu romantic comedy Nuvvila. Yami made her Bollywood debut in 2012 with the romantic comedy ‘Vicky Donor,’ in which she played a Bengali banker opposite Ayushmann Khurrana. Her Bollywood debut was a great hit, with ‘Vicky Donor,’ a one-of-a-kind film on sperm donation, becoming one of the year’s top-grossing pictures. Yami received plaudits and prizes for her performance as ‘Ashima,’ including a ‘Zee Cine Award.’ She was also nominated for various awards, including the ‘Filmfare Award.’

In 2012 and 2013, Yami starred in films such as ‘Hero,’ a Malayalam romantic comedy, ‘Gowri Menon,’ a young lawyer named ‘Yazhini/Yamini,’ in the Tamil/Telugu film ‘Gouravam,’ and ‘Madhumita,’ in the Telugu film ‘Yuddham.’

With the romantic comedy ‘Total Siyapaa’ and the action thriller ‘Action Jackson,’ Yami made a comeback to Bollywood in 2014. Both films failed to make money at the box office.
In the Nawazuddin Siddiqui-starrer action–thriller ‘Badlapur,’ Yami played ‘Misha,’ actor Varun Dhawan’s on-screen wife, in a brief but essential part.

In the 2015 Telugu romance thriller ‘Courier Boy Kalyan,’ Yami played the lead character of ‘Kavya.’ In 2016, she repeated her role in the Tamil remake of the film, ‘Tamilselvanum Thaniyar Anjalum.’ In 2016, Yami played the on-screen love interest of actor Pulkit Samrat in two films, ‘Sanam Re’ and ‘Junooniyat,’ both of which were commercial flops. The former, on the other hand, had a popular soundtrack. Her career was revitalized when she starred as ‘Supriya Bhatnagar,’ Hrithik Roshan’s on-screen blind wife in the 2017 romantic thriller ‘Kaabil.’ Despite the fact that Yami’s character perished in the first half, her performance was lauded by all.

Yami played an advocate named ‘Gulnaar Rizvi’ in the 2018 film ‘Batti Gul Meter Chalu,’ a social message film, and had a minor cameo in the third chapter of Ram Gopal Varma’s political thriller serial ‘Sarkar.’ The crowds were underwhelmed by both films.

After ‘Vicky Donor,’ Yami’s most significant performance and most successful film was the 2019 military action–thriller film ‘Uri: The Surgical Strike.’ In this ‘National Award’-winning film, she played Pallavi Sharma, an intelligence officer, opposite Vicky Kaushal and Paresh Rawal.

Yami will reprise her role as Ayushmann Khurrana in the comedy–drama ‘Bala,’ which will be released in theaters on November 22, 2019. Yami has been the face of the ‘Fair & Lovely’ fairness product for a long time. Anurag Basu, a filmmaker, directed her debut commercial for the brand. ‘Cornetto,’ ‘Samsung,’ and ‘Chevrolet’ are among the other brands she supports.

Divya Khosla Kumar, the wife of ‘T-Series’ CEO Bhushan Kumar, who has also produced three of Yami’s films, has started a cold war with her. When she blamed the ‘T-Series’ production team for leaking reports of her affair with co-star Pulkit Samrat during the marketing of ‘Sanam Re,’ the feud began.

Yami’s statement did not sit well with Divya. As a result, for a long time after the incident, ‘T-Series’ did not give her any films. Even ‘Junooniyat’ was not marketed, negatively impacting its box office performance.
Later, Yami was cast in ‘Batti Gul Meter Chalu,’ as co-producer Prernaa Arora attempted to reconcile her and Divya’s disputes. Yami, on the other hand, refused to apologize, despite Divya’s insistence.

Mukesh Gautam, Yami’s father, is a film and television filmmaker who helmed the hit television show “India’s Most Wanted.” He also serves as the vice president of the ‘PTC’ channel. Surilie, her younger sister, is also a Punjabi cinema actor. From her father’s side, Yami is Punjabi, while from her mother’s side, she is Pahari. Her grandpa had established a school for the needy in Chandigarh, so the family relocated there.

During the production of ‘Sanam Re,’ she was rumored to have dated Pulkit Samrat. Pulkit’s divorce from Shweta Rohira was allegedly precipitated by their suspected romance.

Yami and Shweta publicly expressed their disdain for one other at a movie viewing, fueling the allegation even further. Pulkit was allegedly under pressure from Yami to divorce Shweta and make their relationship official. Pulkit and Yami had also been introduced to each other’s parents, which was exciting news.

Shweta eventually resorted to social media to publicly blame her failing marriage on Yami. She did, however, keep Pulkit away from the situation. She said that Yami had been following him all along and that Pulkit had never shown any interest in her. Yami has reportedly broken up with Pulkit, according to certain sources. Pulkit is rumored to be dating Kriti Kharbanda.