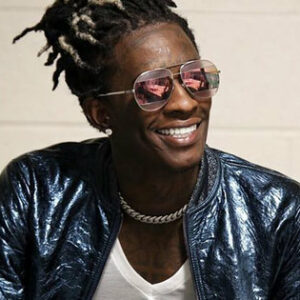 Young Thug is an American rapper whose real name is Jeffery Lamar Williams. Since 2011, he’s had a spot on the Billboard charts in the United States. He has become today’s mainstream rapper by collaborating with artists such as Gucci Mane, Birdman, Waka Flocka Flame, and Richie Homie. His music became famous at night clubs and gatherings after he produced a mix tape in 2013, which received great reviews. He has worked hard to acquire notoriety, first in Atlanta and subsequently in the United States, as part of a family of 10 siblings. In his early career as a style icon, he established several trends and exudes a relaxed and easygoing manner. For wannabe rappers, his bling trinkets and long hair have become a fashion statement. He learned in his adolescent years that he had a greater understanding of women’s fashion and began to wear new styles combining male and feminine attires, which he continues to wear at various events and pulls off. This has sparked a lot of debate, although not quite as much as his declaration of homosexuality, despite the fact that he is engaged to Jerrika Karle. He has become a celebrity due to his excellent rhythm, despite his unorthodox lifestyle. He is open, direct, and unflappable, which allows him to stay unaffected by negative feedback.

Young Thug was born Jeffery Lamar Williams on August 16, 1991, in Atlanta, Georgia. He is the second youngest of eleven children born to his mother. Their family lived in the now-demolished Jonesboro South complexes together.
His biological fathers are different for each of his siblings. His father is the same as his sister, who is the youngest of all the siblings. His mother struggled to meet the needs of so many children.

He grew raised in the thick of a criminal underworld. His older brother was murdered right in front of his eyes, and one of his brothers is currently in prison after being charged with murder.
He went to elementary school until he was in sixth grade. After breaking his teacher’s arm, he was expelled from school and sentenced to four years in juvenile jail.

During his adolescence, he developed bad habits and, like his siblings, began gambling. He enjoyed the excitement of taking risks. He quickly spiraled into drug addiction and violence.
He had his first child when he was seventeen years old. Around this time, he began to recognize his musical and rapping abilities. He realized right then and there that he would no longer be content to live in poverty.

Gucci Mane was blown away by Young Thug’s debut mixtape, titled “I Came From Nothing.” He instantly signed him to his label after noticing how distinct and unmistakable his work was.
Under Gucci’s label, he released another mixtape named ‘1017 Thug’ in 2013. His tracks were a smash, and he was featured in ‘Pitchfork: Albums of the Year’ and ‘Complex’ gave him a positive review.

His song ‘Pichacho’ was named the best track on his mixtape, and it was included in ‘Rolling Stone’ and ‘Spin’ lists of the year’s top songs. The mixtape was also named one of the top five tapes of 2013 by ‘The Guardian.’
He released his first song, ‘Stoner,’ later that year, followed by ‘Danny Glover.’ Both songs became hits, and several well-known rappers and DJs remixed them. Regrettably, he did not approve of the remixes of his song.
He immediately began collaborating with famous artists like Alex Tumay, Danny Brown, Trick Daddy, and even Travis Scott, solidifying his status in the music industry.

Young’s year of 2014 was one of his most fruitful. Following reports that he had signed a 1.5 million dollar record deal with Cash Money Records, Birdman revealed that he had only inked a management arrangement with the label.
He recorded numerous tracks with Kayne West, Rich Homie, and Chief Keef under the moniker ‘1017 Brick Squad,’ one of which was featured on the cover of ‘The Fader.’
In March 2014, he revealed that his debut album, titled ‘Carter 6,’ will be out shortly, as a tribute to Thug’s adoration for Lil Wayne’s hit album ‘Tha Carter.’

Due to his freestyle abilities, he rapidly began recording new songs. Unfortunately, his album songs were leaked due to a data issue. It became viral, and in order to fix the problem, he had to make two mixtapes – Slime Season and Slime Season 2 – as soon as possible.

Lil Wayne was not thrilled with Young’s assertion that he intended to devote his first album to him, and the matter was eventually settled in court. Following that, Young released a mixtape called ‘Barter 6’ instead of an album, later altering the name to ‘HiTunes’ under the ‘Atlantic’ record label.

Following the release, he had a meeting with Kayne, who was blown away by Young’s distinctive style and even compared him to Bob Marley. They declared in 2015 that they would collaborate on an album, but no dates have been set.

Young’s debut ‘extended play,’ or EP, titled ‘I’m Up,’ was released in 2016, and it quickly became a hit on the American music charts. After that, he released another mix tape called “Slime Season 3,” which put an end to the leaked tape saga.

In the middle of the year, he scheduled a tour in the United States for his mixtape ‘HiTunes’ with ‘Rich the Kid,’ ‘TM88,’ and ‘Dae Dae.’ During the tour, he became a fashion star and was included in Calvin Klein’s fall 2016 collection.
With record label offers piling up, he’s working on a mixtape titled “Jeffrey” and hopes to start his own label, YSL Records, soon.

His mixtapes have all been successful, but one in particular has done extraordinarily well. On the Billboard 200, ‘Barter 6’ was ranked number 22. Some reviewers stated that the album’s popularity was due to Young’s feud with Lil Wayne, while others claimed that it was due to his unique rapping style.

His most famous single, ‘Picacho,’ which was not intended to be a single, made it to the top 100 tracks in both ‘Rolling Stone’ and ‘Pitchfork,’ as well as being included in ‘Spin’s’ top 50 songs.
After Wale created an illegal remix of his song “Stoner,” it went viral again in 2014. The remix drew so much attention that Young’s original song began to resurface on music charts.

The bi-monthly fashion magazine Complex named him one of the “25 New Rappers to Watch Out For” in 2013.
Young Thug was nominated for ‘Who Blew Up,’ ‘Best Hip-Hop Style,’ and ‘Best Club Banger- for Stoner’ at the 2014 BET Hip-Hop Awards.
The following year, he was nominated for a BET Award in the ‘Coca-Cola Viewers’ Choice Award’ alongside Nicki Minaj and Rae Sremmurd for his song ‘Throw Sum Mo.’

He has six children from four women at the age of twenty-five. Jerrika Karlae is his current fiancée. She works as a manager for a swimsuit company.
Despite his notoriety, Thug hasn’t been able to stay away from the criminal underworld. He was detained on ‘terrorist threats’ charges in 2015 after threatening to kill an Atlanta mall guard.

The feud between Lil Wayne and Young Thug, as well as Birdman and Jimmy Winfrey, reached new heights when the three rappers were charged with murder conspiracy after Winfrey opened fire on one of Wayne’s events.

Young Thug, who is known for his eccentric and free-spirited demeanor, has never written down the lyrics to his songs. Instead, he draws forms and designs to plan his lyrics.