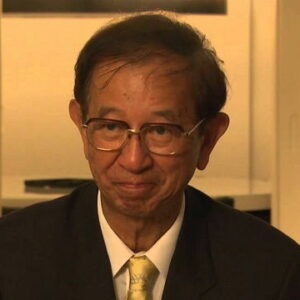 George Wald was an American scientist who shared the 1967 Nobel Prize in Physiology or Medicine with Haldan Keffer Hartline and Ragnar Granit for his work on the physiological and chemical processes of seeing in the eye. Wald spent his whole life studying how the eye sees and sends pictures to the brain. People in the scientific community and other researchers gave him high marks for his work with pigments in the retina. He used chemical methods to get pigments out of the retina and then measured how much light the pigments could absorb. Wald had a steady academic career in addition to the scientific discoveries and research he did. He started out as a tutor at Harvard and worked his way up to Faculty Instructor, Associate Professor, and finally Professor of Biology. During his life, Wald got a lot of awards and honors for his research from different places around the world. He was also a member of many scientific organizations.

Yuan T. Lee was born on November 19, 1936, in Shinchiku City, Shinchiku Prefecture, Japanese Taiwan. His father, Lee Tze-fan, was a well-known artist from Shinchiku, and his mother, Ts’ai Pei, was a teacher from Goseik Town.

Taiwan was still under Japanese rule when he was a young boy. During World War II, the people of his city were moved to the mountains, which made it hard for him to go to elementary school.

He couldn’t go back to school until the war was over and life went back to normal. He did well in school at the Hsinchu Elementary School because he was a good student. He was also athletic and took part in many different sports. He played baseball for his school and also played tennis and ping-pong.

During his time in high school, he grew into a well-rounded person. He did well in school and sports, and he also showed that he was a good musician by playing the trombone in the marching band. He was also very interested in reading, and he read a lot about many different things. After reading about Madame Curie’s life, he was very moved and decided to become a scientist.

He did well in school and did not have to take the entrance exam to get into National Taiwan University. This was in 1955 when he graduated from Hsinchu Senior High School. In 1959, he got a B.Sc.
Then, he went to National Tsing Hua University and got his M.S. there in 1961.

In 1962, he went to graduate school at the University of California at Berkeley. For his doctoral thesis, he worked with Professor Bruce Mahan. During his research, he became interested in how ions react with molecules and how molecules move when they scatter. In 1965, he got his Ph.D. degree.

Yuan T. Lee stayed in Mahan’s group after he got his Ph.D. and started working with Ron Gentry on ion-molecule reactive scattering experiments. After a few months of trying different things, he figured out how to design and build a very powerful scattering device that could be used to do specialized experiments.

As a post-doctoral fellow at Harvard University in 1967, he worked with Professor Dudley Herschbach on reactions between hydrogen atoms and diatomic alkali molecules. During this time, he also worked with Doug McDonald and Pierre LeBreton to build a machine with crossed molecular beams that could be used anywhere.

In 1968, he was offered a job as an assistant professor at the University of Chicago’s Department of Chemistry and the James Franck Institute. He took the job and began a long and successful academic career. In 1971, he was made an associate professor, and in 1973, he was made a professor.

In 1974, he moved back to Berkeley and got a job as a chemistry professor and the head of research at the Lawrence Berkeley National Laboratory. In the same year, he became a U.S. citizen.

His research was mostly about how chemical reactions depend on the orientation of molecules, how molecules break down and figuring out how complex reactions work. The range of his scientific research grew a lot over the years.
He is also very involved in politics and has worked to help set up new research institutes in Taiwan so that scientific research can move forward there.

He improved Herschbach’s crossed molecular beam technique and added mass spectroscopy to it to find out what happens when oxygen and fluorine atoms react with complex organic compounds.

In 1986, Yuan T. Lee, Dudley R. Herschbach, and John C. Polanyi shared the Nobel Prize in Chemistry “for their contributions to our understanding of the dynamics of chemical elementary processes.”
In 1986, he also got the Peter Debye Award and the National Medal of Science.

He is married to Bernice Wu Chin-li, whom he met in elementary school and has been with ever since. There are three kids in the family.

Yuan is one of the wealthiest chemists and is on the list of the most well-known chemists. Based on what we’ve found on Wikipedia, Forbes, and Business Insider, Yuan T. Lee’s net worth is about $1.5 million.