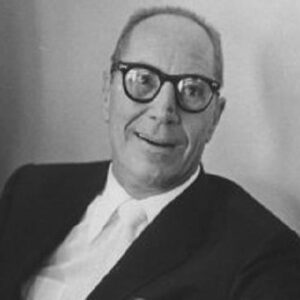 Zeppo Marx, also known as Herbert Manfred Marx, was a well-known stage name for this actor, comedian, theatrical agent, and gifted engineer of American descent. He was the eldest of the well-known Marx Brothers and possessed a variety of skills. He was the most attractive Marx sibling and primarily portrayed the straight guy. He frequently played love roles as well, although his comedic abilities were unappreciated. Zeppo, who had a wonderful tenor voice, provided vocals for a number of Marx Brothers movies. He received praise for the song “Everybody Says I Love You” in the movie “Horse Feathers.” After the release of “Duck Soup,” Zeppo gave up acting in favor of pursuing a second career as an inventor. He established the Inglewood-based Marman Products Co. and created the “Marman Clamp,” which has several uses in the aerospace and aviation industries. Another of Zeppo’s very outstanding inventions was a wristband for cardiac patients to monitor pulse rate. He was able to amass a fortune worth millions because of his innovations and acumen.

He was of German Jewish and French ancestry and was a first-generation American. His mother was German and his father was French. The father of Zeppo was a tailor. Chico Marx, Harpo Marx, Groucho Marx, and Gummo Marx were his four brothers.

The origin of Herbert Manfred Marx’s moniker or stage name is a subject of various legends. Some stories claim that his father initially called him “Zep,” which ultimately evolved into “Zeppo.” Groucho stated that the name was derived from the Zeppelin airship in his “Carnegie Hall Concert” in 1972. The same was stated by Zeppo’s ex-wife Barbara Sinatra in her book “Lady Blue Eyes: My Life with Frank” published in 2011. Contrarily, Harpo had developed a different view regarding this.

The Marx Brothers, a well-known family comedy group, was founded by the four senior Marx brothers. Zeppo, who was the youngest, grew up seeing his brothers’ creations. Zeppo effortlessly understudied them and kept the show going when one of them was unable to perform due to illness or any other unavoidable problem.

In the beginning, when they were busy touring, he was in charge of maintaining the family car because he was gifted with good engineering talents.

After one of his brothers, Gummo departed the family act in 1919, Zeppo Marx began performing as a romantic lead and as a straight man. He went on tour in vaudeville in the early 1920s with his older brothers Groucho, Chico, and Harpo.

With the musical comedy “I’ll Say She Is,” which they released in 1924, the Marx Brothers attracted widespread acclaim. The popular long-running program “The Cocoanuts” came next (1925-28). The programs made them household names and very well-liked.

Zeppo appeared in the comedy “A Kiss in the Dark” in 1925 in a small solo role. The brothers also produced the comedy “Humorisk,” which is now regarded as a lost film because it was never shown in theaters.

Zeppo was not funny enough for some folks. Groucho believed the team was funnier without Zeppo, despite the opinions of several of his brothers who thought he was the funniest of all.

Zeppo primarily portrayed the straight guy in “The Marx Brothers” films for Paramount Pictures, however, he occasionally appeared in parts from classic comedies. In the 1930 film “Animal Crackers,” he played Groucho’s older brother’s role instead. Zeppo saved the show because Groucho couldn’t perform in it because he needed surgery at the time. Zeppo appeared in movies such as “Monkey Business” and “Dark Soup.”

Zeppo was an important character in the 1931 film “Monkey Business” as Ruth Hall’s love interest. He appeared in the 1932 movie “Horse Feathers” alongside Thelma Todd and the other Marx Brothers.
Zeppo discovered that his ability and time were being wasted in the entertainment industry after appearing in minor roles in the Marx Brothers’ first five films. Zeppo departed the group in 1933 to pursue other opportunities in order to fully realize his ability.

As a talent agent, Zeppo joined his older brother Gummo in establishing a business. In 1941, he established his own business, “Marman Products,” which produced clamping tools known as “Marman Clamps.” His business also produced the “Marman Twin,” a motorcycle. Throughout his professional career, he also worked as a commercial fisherman and citrus grower.

Zeppo Marx started his own business, Marman Products Co. of Inglewood, California, subsequently known as the “Aeroquip Company,” because he was dissatisfied with his humorous career.

He was the owner of a patent for the bracelet he created for cardiac patients that tracked their pulse rate and sounded an alarm in the event of any deviations. He also created a heating pad for therapy that provided a patient with moist heat. Zeppo became a multimillionaire thanks to his business endeavors.

Zeppo Marx was married twice. In 1927, he wed Marion Benda, his first wife. Thomas and Timothy were two sons they adopted. After their divorce in 1954, Zeppo married Barbara Blakeley five years later. Bobby Oliver, a child from Barbara’s first marriage, is his name. Bobby’s father objected when Zeppo tried to give him his last name.

Zeppo had a tendency to be a possessive husband. Due to his domineering actions, Barbara experienced numerous problems, and the couple split in 1973. Frank Sinatra and Barbara later got married.

Marx sold his house after receiving a lung cancer diagnosis in 1978 and spent his final days with Barbara Blakeley’s family. On November 30, 1979, in Rancho Mirage, California, he passed away from the illness. His remains were dispersed throughout the Pacific Ocean.

Zeppo is among the wealthiest and most well-liked actors in movies. Zeppo Marx’s net worth is roughly $1.5 million, according to our analysis of data from sources like Wikipedia, Forbes, and Business Insider.