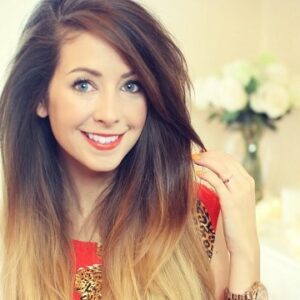 The number of youthful bloggers, YouTubers, and Vloggers has surged as a result of the internet’s recent, unstoppable growth. One such celebrity, Zoella, has caused quite a stir in the UK with her fashion blogs as well as her accomplishments in a number of other areas. Her fashion blog has received millions of views and has been favorably accepted by the general population. She has gained a sizable following of female followers thanks to her eccentric style recommendations. She started her blog, dubbed “Zoella,” while she was an apprentice at an interior design firm. This blog would go on to become her claim to fame. The blog, which debuted in 2009 and has already received more than 500 million visits, was an immediate success. Soon after starting her blog, she created the “zoella280390” YouTube account. The young woman has also introduced a line of beauty items. Aside from being a best-selling novelist, did we also mention that?

She started her professional career working for an interior design firm before starting her wildly successful “Zoella” blog. The blog, which was started in 2009, had more than 540 million visitors as of September 2015. Within months after the blog’s 2009 start, the fashion, beauty, and lifestyle blog developed into the YouTube channel “zoella280390.” Since the channel was so popular, Zoella decided to start another one called “MoreZoella,” which featured videos of her daily activities. The popularity of this channel, which was also an instant success, significantly grew Zoella’s fan base, especially among young people. She also started performing on the program “Daily Mix” with other YouTube celebrities, giving her the chance to mingle with some of the platform’s most well-known personalities. In actuality, this was the start of her partnerships with several other YouTube personalities. Her primary YouTube channel had more than 9.9 million followers and more than 663 million video views by the end of 2015, while her secondary channel had more than 3.4 million subscribers and more than 290 million views.

When she accepted a deal with Penguin Books in 2014, she stepped into uncharted waters. Girl Online, her debut book, shot to the top of the bestseller list among young readers. Although Zoella was portrayed in the book as an internet blogger, she never expressly stated that the book was based on her. With sales of 78,109 copies, the book set a new record for a rookie author’s first-week sales since statistics have been kept in 1998. In response to the popularity of this book, Zoella wrote a sequel, “Girl Online: On Tour,” which was published in 2015. A third book is currently being written. The gifted young woman has already received a number of honors, including the Teen Choice Award for Choice Webstar: Fashion/Beauty (2011), the Cosmopolitan Blog Award for Best Established Beauty Blog (2012), and the Cosmopolitan Blog Award for Best Beauty Vlogger (2013). (2014 and 2015).

Why Zoella Is So Special?

Zoella is more than simply a popular YouTube celebrity with a lovely face. The sympathetic young woman, who values giving back to society, was selected as one of the National Citizen Service’s ambassadors in 2013, assisting in the promotion of the recently introduced youth service. In 2014, she also became Mind’s first “Digital Ambassador.” Mind is a mental health charity. She made an appearance on the Band Aid 30 charity supergroup hit “Do They Know It’s Christmas?” that same year. The song debuted at the top of the UK Official Singles Chart in an effort to raise money for the Ebola virus pandemic in West Africa.

Past Fame of Zoella

Despite having accomplished so much at such a young age, Zoella is not smug. In fact, she is constantly searching for better prospects and in September 2014 she introduced a line of cosmetics under the name “Zoella Beauty.” Teenagers and young girls love her “bath and beauty” line, which includes “Tutti Fruity” and “Sweet Inspirations”!

In Lacock, Wiltshire, England, Zoe Elizabeth Sugg gave birth to Zoella. Before starting her job as an apprentice at an interior design firm, she attended the Arts College and the Corsham School secondary school. Joe Sugg, her only sibling, is a YouTube vlogger under the username “ThatcherJoe.” Alfie Deyes and her have been dating since 2013. The YouTube blog scene includes her lover, who goes by the name “PointlessBlog.”

English fashion and beauty vlogger, novelist, YouTuber, and author Zoe Sugg has a $4 million fortune. In March 1990, Zoe Sugg was born in Lacock, England, in the United Kingdom. She is well-recognized on YouTube under the moniker Zoella. Girl Online, Sugg’s first book, was released in November 2014. It surpassed the previous record for the biggest first week of sales for a debut novelist set by Nielsen BookScan in 1998. When she decided to start the blog Zoella in 2009, she was an intern for an interior design firm. Sugg was the first Digital Ambassador for the mental health nonprofit Mind and has been designated as one of the National Citizen Service’s ambassadors. She played an uncredited role in the 2001 film Harry Potter and the Philosopher’s Stone and has made guest appearances on Newsround, Loose Women, and YouTubers React. 2014 saw Sugg introduce the Zoella Beauty brand of cosmetics. She got the Choice Web Star Award in the Fashion/Beauty category at the 2015 Teen Choice Awards. According to reports, Zoella makes $75k a month from her YouTube channel.