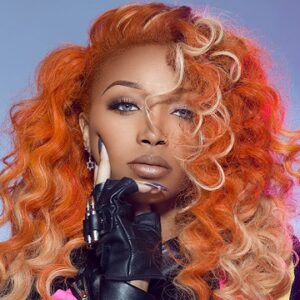 Zonnique Pullins, commonly known as “Miss Star,” is an R&B singer who was a member of the girl group “OMG Girlz” with singers Bahja Rodriguez and Breaunna Womack. Popular songs including ‘Ain’t Nobody,’ ‘Haterz,’ ‘Gucci This (Gucci That),’ and ‘So Official’ have helped the group earn a large following. Zonnique also played as part of this group at the Scream Tour: Next Generation in 2011, which served to raise her profile even more. Zonnique Harris was introduced to the world of music at a young age as the daughter of Grammy Award-winning singer-songwriter Tameka Harris. From the moment she can remember, the small girl dreamed of becoming a singer, having inherited her mother’s ability and enthusiasm for music. Her mother not only pointed her in the proper direction, but also provided her with all of the necessary resources to help her pursue a great singing career. Despite the fact that the ‘OMG Girlz’ disbanded in 2015, Zonnique has managed to have a successful solo career.

Zonnique Pullins longed to be a vocalist since she was born into a musically inclined family. Tameka, a singer-songwriter, decided to form an all-girls musical ensemble with Zonnique after observing her daughter’s interest. Tameka founded ‘OMG Girlz’ in 2009, which included Reginae Carter, Lourdes Rodriguez, Bahja Rodriguez, and Breaunna Womack, as well as Zonnique Pullins. Reginae Carter and Lourdes Rodriguez quit the group during the next few months, leaving the others as a trio.

After winning a nationwide contest, the surviving girls in the group were given the opportunity to play at the Scream Tour: Next Generation. Their appearance on the tour garnered them a lot of attention as well as a devoted fan base. Despite the fact that the girls had already published a few singles, it was their hit, ‘Gucci This (Gucci That),’ which was featured on the tour, that propelled them to popularity. The OMG Girlz were signed to Interscope/Streamline Records shortly after the tour ended. Under Interscope/Streamline Records, the girls went on to release other famous singles, including ‘Where The Boys At?,’ ‘Lover Boy,’ and ‘Baddie.’ The girls went on the All Around The World tour with young male pop group Mindless Behavior in the summer of 2013. OMG Girlz won the 44th NAACP Image Award for Outstanding New Artist the same year.

In the meantime, Zonnique had made a few TV appearances. ‘T.I. & Tiny: The Family Hustle,’ a reality TV show about her mother, stepfather, and siblings, aired on T.I. & Tiny. From 2011 through 2017, the show aired. The OMG Girlz shockingly announced in March 2015 that they were disbanding and would no longer perform as a trio. This news came as a complete shock, considering the band had just enjoyed a lot of success. Following the disbandment of the group, Zonnique embarked on a solo career, releasing the single ‘Nun For Free’ in June 2015. In the same year, she released three more songs: ‘Cool Kids,’ ‘My Nigga,’ and ‘Can’t Trust Em.’ ‘Love Jones,’ her debut EP, was published in March 2017.

Zonnie Pullins and Tameka Cottle gave birth to Zonnique Pullins on March 20, 1996 in Georgia. Her parents divorced while she was a child, and her mother married T.I., a rapper. Messiah, King, Major, and Domani are four of her brothers, and Deyjah and Heiress are two of her sisters.
Zonnique had a romance with rapper Zoey, but they ended up breaking up. Damian Swann, an NFL player, is her current boyfriend.

Zonnique Pullins has a net worth of $500,000. Zonnique Pullins is an American R&B singer with a net worth of $500,000. She is best known for being the daughter of Tameka “Tiny” Harris and for being a member of the girl group OMG under the stage name “Miss Star” (formerly OMG Girlz). Former Xscape members Tameka “Tiny” Cottle and Kiesha “Babi” Miles created OMG, which stands for “Officially Miss Guided,” in 2009.