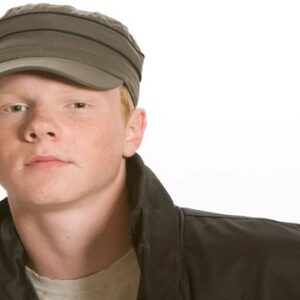 Adam Hicks is an actor and rapper from the United States who rose to prominence after playing Joe Guide in the children’s comedy film ‘How to Eat Fried Worms.’ In 2000, he had his television debut in the series ‘Titus,’ and in 2002, he had small roles in the television movie ‘The Funkhousers’ and the pilot episode of the TV series ‘That Was Then.’ In 2005, he made his film debut in the comedy film ‘Down and Derby’, and also appeared in the movie ‘The 12 Dogs of Christmas’. He is most recognized for his roles as Luther in Disney XD’s ‘Zeke and Luther’ and Wendell “Wen” Gifford in the musical telefilm ‘Lemonade Mouth.’ The latter, in which he played a member of the namesake band, allowed him to further develop his musical abilities. King Boz in the Disney XD series ‘Pair of Kings,’ which premiered in 2012, was his next major role. Over the years, he has been in a variety of different TV shows, including ‘Jonas,’ ‘PrankStars,’ ‘Southland,’ ‘CSI: Crime Scene Investigation,’ ‘Texas Rising,’ and ‘Freakish.’ He also appeared in the indie drama ‘Windsor’ and the sensual thriller ‘The Boy Next Door’ in 2015.

Adam Hicks enjoyed to perform in front of his parents as a child and later became a part of a Tom Sawyer play at school. After seeing his performance in the play, a local talent scout firm took him up to perform around Las Vegas. He began his acting career at the age of seven, when he played the younger Dave Titus, the protagonist’s half-brother, in the Fox dark comedy series Titus. In the years that followed, he performed in a number of telefilms and TV shows before making his big screen debut in 2005, playing Brady Davis in the feature film Down and Derby.

However, it was in 2006 that he got his big break, as Joe Guide in the film How to Eat Fried Worms. In 2008, she played a supporting role in the film Mostly Ghostly. The following year, he was cast as Luthisour “Luther” Waffles, one of the co-leads in the Disney XD sitcom Zeke and Luther. After the series concluded in 2012, he landed a main part in Pair of Kings, another Disney XD sitcom that ran for three seasons. He played the role of King Boz, replacing the figure of King Brady originally by Mitchel Musso.

Adam Hicks, who has loved music since he was a boy, rose to recognition as a hip-hop singer-songwriter after his acting career. His first recorded song was a cover of MC Hammer’s “U Can’t Touch This,” on which he collaborated with fellow ‘Zeke and Luther’ co-star Daniel Curtis Lee as a featured artist. It was followed by a Mungo Jerry remix of the song “In the Summertime.” Both songs’ music videos were broadcast on Disney XD in 2009 and formed part of the ‘Zeke and Luther’ album.

When he played Wendell “Wen” Gifford in the 2011 adolescent musical film Lemonade Mouth, he finally got to combine two of his passions: acting and singing. On April 12, 2011, the soundtrack album Lemonade Mouth was released. He performed four of the songs with his band, and he also contributed to the lyrics of three of them. On the Billboard 200, the album reached number four. He was also working on a record called “We Burnin’ Up” at the time, which featured Chris Brochu in the music video. He then got signed to Walt Disney Records. He also sang the opening theme song for the Disney XD original series Mighty Med, “You Never Know.”

Adam Hicks was born in Las Vegas, Nevada, on November 28, 1992, to Lucy and Ronald Hicks. Tristan is his sister’s name. Since his childhood days, he exhibited interest in numerous areas including skating, dancing, playing the drums, rapping and writing songs. Following his acting breakthrough, he relocated to Los Angeles, California. He has five cats and two dogs, whom he adores.

In the year 2008, Adam Hicks began a relationship with Brianna Mccraken. They were together for two years until breaking up in 2010. He was later linked to Zeke and Luther co-star Chelsea Ricketts, who appeared in one episode. After his mother passed away in November 2015, a source close to him verified the suspected relationship by adding that Chelsea helped him cope with the hardship by being by his side during this time.

His estimated net worth is $3 million. Based on his performance in this profession, we can estimate he gets a fair salary and has a good net worth.