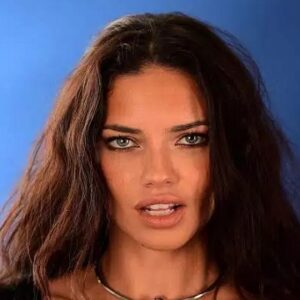 Adriana Francesca Lima, also known as the ‘Victoria’s Secret Angel,’ is a Brazilian model and actress. Her exceptional physical attractiveness and understanding of professionalism have given her the right to be considered among the greatest in her field. Lima’s modeling career began when she was in elementary school, and it served as a stepping stone in her career. She was also the Maybelline cosmetics spokesmodel from 2003 to 2009, and she was featured in the company’s inaugural calendar. She also completed an ad campaign for Swatch, which helped her gain further exposure. Lima has been featured in various foreign Vogue and Marie Claire editions. She has walked the runways for designers such as Giorgio Armani, Vera Wang, and Valentino. Lima debuted as a GUESS? girl in 2000, and she was featured in the brand’s fall ad campaign the following year. Lima was ranked fourth on Forbes’ top-earning models list in 2012, with a one-year earnings of $7.3 million. She is married to Marco Jaric, a Serbian basketball star, and they have two daughters together.

Adriana Lima was born in Salvador, Bahia, Brazil, on June 12, 1981, to Nelson Torres and Maria da Graca Lima. Her mother, a social worker, raised her on her own after her father abandoned them when she was a youngster.
She won many beauty pageants in elementary school but never considered pursuing a modeling career. She did, however, enter Ford’s ‘Supermodel of Brazil’ modeling contest at the age of 13 with a friend who didn’t want to enter the contest alone, and she came in first!

She placed second in Ford’s ‘Supermodel of the World’ competition in 1996. She traveled to New York City three years later and signed with Elite Model Management. She went on to model for many well-known designers, including Vera Wang, Giorgio Armani, and Valentino, and appeared in numerous international editions of ‘Vogue’ and ‘Marie Claire.’

Adriana Lima became an official ‘Guess’ girl in 2000 and appeared in numerous commercial campaigns for the brand. She became a spokesmodel for ‘Maybelline’ three years later, a position she held until 2009. In the same year, she was featured in the company’s first calendar and participated in a swatch ad campaign.

In the meanwhile, she worked for a number of well-known fashion houses, including ‘bebe,’ ‘Armani,’ ‘Versace,’ ‘BCBG,’ and ‘Louis Vuitton.’ ‘Harper’s Bazaar’, ‘Elle’, ‘GQ’, ‘Arena’, ‘Vogue’, ‘V’, ‘Esquire’, and ‘French revue des modes’ have all featured her on the covers of fashion publications.
In 2001, she landed her first acting part in ‘The Follow,’ a short film in the BMW series ‘The Hire,’ in which she starred with Clive Owen, Mickey Rorke, and Forest Whitaker as a damsel in distress.
She was included in the Pirelli calendar in 2005 and also became the face of Telecom Italia Mobile, Italy’s cell phone carrier. It earned her the moniker “Italian Catherine Zeta Jones.”
She was featured on the covers of ‘Esquire’ in 2008. In the same year, she was named the face of the Liverpool department store brand in Mexico. In the same year, she made an appearance in the American television show ‘Ugly Betty.’

She walked for ‘Givenchy’ in 2009 and then got a deal with Doritos to appear in print advertisements. She was also one of Givenchy’s Fall/Winter 2009 campaign’s faces.

She signed an agreement to appear in ads for Megacity by Votsu in 2011 and also became the face of a Brazilian luxury brand. She collaborated with a number of notable photographers at this time, including Inez van Lamsweerde and Vinoodh Matidin, Vincent Peters, Mario Sorrenti, Mert Alas and Marcus Piggott, David Sims, and Mario Testino.
She acquired a contract with Mavi Jeans, a Turkish apparel business, in 2012, and completed a number of ad campaigns for them, earning her a lot of attention. Mavi’s European and Russian branches made her the global face of the business due to her burgeoning fame.

She was included in the Pirelli calendar for the second time in 2013. She holds the distinction of being the first pregnant woman to appear in the calendar.

She posed for some of the top companies over the next several years, including Vogue Eyewear and Marc Jacobs’ fragrance ‘Decadence’ in 2015; Calzedonia’s Swimwear line in 2016; and Sportsmax, an Italian ready-to-wear clothes company, in 2017.

Adriana Lima did the first ‘Victoria’s Secret’ fashion show in 1999 and secured a contract with them as a ‘Angel’ in 2000. She wore the ‘Fantasy bra’, which was made by American jewelry designer Martin Katz and was set with 3575 black diamonds, 117 certified 1 carat white round diamonds, 34 rubies, and two black diamond drops totaling 100 carats and valued over $5 millions, at ‘Miracle Bra Relaunch’ in November 2008.

In 2008, she starred in Victoria’s Secret’s Super Bowl XLII ad, which was the game’s most-watched commercial. A total of 103.7 million people watched it.

In 2010, she donned the $2 million fantasy bra, “Victoria’s secret bombshell fantasy bra,” for the second time.
By featuring in Super Bowl XLVI ads for online flower provider Teleflora and Kia Motors in 2012, she became the only celebrity to ever star in two Super Bowl commercials in one game.

In the 2005 Forbes edition, she was named one of the ‘World’s best-paid celebrity under 25.’ She was rated 8th on Forbes’ list of “The world’s most powerful Latino celebrities” in 2012, with a net worth of more than $7 million.
Before the 2007 Victoria’s Secret fashion show, she was honored with a star on the ‘Hollywood Walk of Fame.’ She was ranked 7th on FHM’s ‘100 Sexiest Women 2007’ list in the same year.

According to Google search results, she was placed 46th among the top 50 most popular women on the internet in 2010. In the list of ‘The 100 hottest supermodels of all time,’ she was placed fourth by ‘Complex’ magazine.

Adriana Lima and Marko Jari announced their separation in 2014, and their divorce was finalized in 2016.
She is a devout Roman Catholic who goes to church every Sunday. She is also a member of a philanthropic trust that supports an orphanage in Salvador. She assists in the construction of the orphanage’s expansion and purchases clothing for underprivileged children.

Adriana Lima has a net worth of $95 million.

She applied for Serbian citizenship in 2009 after marrying Marco Jaric, a Serbian NBA player, however she was denied citizenship.