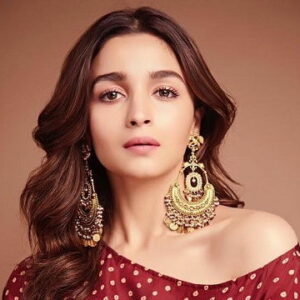 Alia Bhatt is a Hindi-language actress from India. She is the daughter of well-known Indian filmmaker Mahesh Bhatt and his British-born wife Soni Razdan, and was born in Mumbai. She was exposed to show business at a young age, appearing in the film ‘Sangharsh’ as a kid artist. She went on to perform one of the lead roles in the film ‘Student of the Year’ a few years later. The film, directed by Karan Johar, was a commercial triumph, becoming one of the year’s biggest grossing pictures. Her performance was lauded, and she was nominated for a Filmfare Award in the category of “Best Female Debut.” She then starred in the road drama ‘Highway,’ in which she played a wealthy woman kidnapped by thugs. The romantic comedy ‘Badrinath ki Dulhania’ and the espionage thriller ‘Raazi’ are two of her most recent films. In the film ‘Welcome to New York,’ she made a cameo appearance. Bhatt, who is also a singer, has sang a few songs in her films. She developed her own fashion label for the online retailer Jabong.com in addition to her acting and singing careers. Alia Bhatt is highly popular on the photo-sharing app Instagram, with over 51 million followers.

Alia Bhatt was born in Mumbai, India, on March 15, 1993. Her father, Mahesh Bhatt, is a well-known Bollywood filmmaker, and her mother, Soni Razdan, is an actress. Alia Bhatt attended Mumbai’s Jamnabai Narsee School. She had her debut film appearance as a child artist in the psychological thriller ‘Sangharsh’ when she was six years old.

Alia Bhatt debuted as a leading lady in the 2012 romantic comedy drama film ‘Student of the Year,’ in which she played one of the major characters. The film, directed by Karan Johar, was a commercial success and received mixed reviews. Siddharth Malhotra, Varun Dhawan, Ronit Roy, and Rishi Kapoor also appeared in the film. Bhatt was nominated for a Filmfare Award for ‘Best Female Debut’ for her performance.

She starred in the highway drama film ‘Highway’ in 2014. The film, directed by Imtiaz Ali, was a commercial success. She co-starred in the film with Randeep Hooda as a rich girl who is kidnapped and gradually develops affections for her kidnapper. Her work was praised, and she was awarded the Filmfare Critics Award for Best Actress. She was also nominated for a Filmfare Award for Best Actress.

She co-starred in the romantic comedy film ‘Shandaar’ with Shahid Kapoor in 2015. The film received generally unfavorable feedback. It was also a commercial failure, and it was her first professional flop.
In 2016, she played a lead part in the film ‘Udta Punjab.’ Her performance earned her the Filmfare Award for Best Actress. The video focused on the problem of drug usage in the Punjab state of India. It was a commercial success, but it sparked a lot of debate. ‘Kapoor & Sons’ was another film in which she appeared. It told the story of two brothers who returned to their dysfunctional family after their grandfather died of a heart attack. The movie was a great financial hit.

In the drama film ‘Dear Zindagi,’ Bhatt co-starred with prominent Indian actor Shahrukh Khan (2016). Her acting was praised and the film was a commercial success. She was also nominated for a Filmfare Award for Best Actress in a Leading Role. She starred as the female lead in the 2017 romantic comedy film ‘Badrinath ki Dulhania,’ which went on to become one of the year’s greatest box office hits.

She made a cameo appearance in the film ‘Welcome to New York’ in early 2018. She appeared in the thriller film ‘Raazi’ the same year. The film was about an Indian spy who married a Pakistani military officer during the 1971 Indo-Pak conflict.

Alia Bhatt got accolades and recognition for her performance in the 2014 road thriller ‘Highway.’ The film was directed by Imtiaz Ali and premiered at the 2014 Berlin International Film Festival. The film was a commercial success, grossing Rs. 470 million on a budget of Rs. 250 million. It received largely positive feedback and earned a number of accolades. Bhatt received a Filmfare Critics Award for Best Actress and a Filmfare nomination for Best Actress for her performance.

Her performance in the black comic crime film ‘Udta Punjab’ earned her praise. Abhishek Chaubey directed the film, which also featured Shahid Kapoor, Kareena Kapoor, Diljit Dosanjh, and Suhail Nayyar. The film was a financial success, grossing Rs. 1 billion on a budget of Rs. 400 million. It was about Punjab’s chronic drug usage and the machinations that surrounded it. Critics appreciated the picture in India, however it was banned in Pakistan due to “abusive language.”

In 2018, she starred in the spy thriller ‘Raazi.’ Her portrayal of Sehmat, a Pakistani military officer married to an Indian spy, was well received. The picture was a critical and commercial success.

Alia Bhatt is rumored to be unmarried at the moment. Sabuj Vhai was her previous boyfriend. She is frequently associated to her co-stars and has been linked to actors Varun Dhawan and Ranbir Kapoor at various times.
Bhatt, who eats a vegetarian diet, was named PETA’s 2017 hottest vegetarian.
In 2014, she was named to Forbes India’s ‘Celebrity 100′ list. Forbes Asia named her on their ’30 Under 30’ list in 2017. She’s created an environmental campaign called ‘CoExist’ to raise awareness about the problems that street animals endure.

Alia Bhatt has a net worth of $22 million.