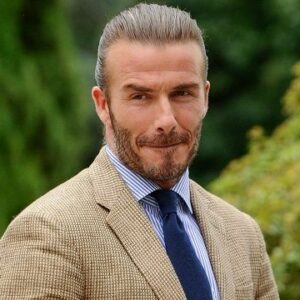 David Robert Joseph Beckham is a retired professional footballer from England. He became one of the most famous players in the world during his playing days as a result of his successful stints at some of the world’s most recognized clubs, as well as his skills as a midfielder, which set him apart from many of his contemporaries. Beckham began his football career in his hometown of London, where he played for a few local clubs before joining Manchester United’s youth development program. David Beckham enjoyed success at Manchester United during the club’s extraordinary winning streak in the mid and late 1990s. After winning the coveted ‘treble’ with Manchester United and becoming one of the club’s most famous players, he went on to play for Real Madrid, AC Milan, Paris Saint-Germain, and the LA Galaxy of Major League Soccer. David Beckham was also a member of England’s ‘Golden Generation,’ and led the team for a significant portion of his career; yet, the team did not achieve the success that was anticipated of it. Throughout his career, Beckham has become one of the most well-known faces in the endorsement sector, and he has routinely been rated among the world’s wealthiest footballers.

David Edward Alan Beckham and Sandra Georgina Beckham had David Robert Joseph Beckham on May 2, 1975, in the Leytonstone neighborhood of London, England. His father was a hairdresser, while his mother was an appliance repairman. Beckham and his two sisters grew up together.

David Beckham attended Chase Lane Primary School as a child before attending Chingford County High School as an adult. Beckham, on the other hand, was more interested in football as a boy and used to play for a local team called Ridgeway Rovers.

David Beckham tried out for a number of clubs, including Norwich City and Leyton Orient, before enrolling in Tottenham Hotspur’s school of excellence. He also played for Brimsdown Rovers, where he excelled throughout his time there. When he was admitted into Manchester United’s Youth Training Scheme in 1991, though, his life was forever transformed.

David Beckham became a member of Manchester United’s renowned ‘Class of ’92’ youth players when he helped the club win the FA Youth Cup. Beckham made his senior squad debut in 1992 and signed his first professional deal with Manchester United in January of the following year.

He returned to Manchester United in 1995 after a season on loan with Preston North End, where he played as a right-sided attacking midfielder. The next year, he helped Manchester United win both the Premier League and the FA Cup, proving that manager Sir Alex Ferguson’s faith in young players had paid off. In the same year, he earned his international debut for England.

He was a key member of the Manchester United club that dominated English football from the mid-to-late 1990s, and he helped the team win ‘the triple’ in 1999. (the Premier League, the FA CUP and the UEFA Champions League). Beckham was one of the best midfielders in the world at the time, scoring 262 goals in 262 appearances and winning six Premier League medals during an eight-year spell with Manchester United senior.

David Beckham represented England in the 1998 World Cup in France, scoring one goal against Columbia in the group stage. However, Beckham’s World Cup ended in tears when he was sent off in the round of 16 game and England was eliminated on penalties. Beckham was slammed by both fans and the media. When England was ousted in the first round of the European Championships in 2000, the vitriol from spectators persisted.

In 2000, Beckham was named captain of the England national team, and in a World Cup qualifier against Greece, he scored a last-gasp equalizer to send England to the main event. In the World Cup in Japan and South Korea, he scored the game-winning penalty against Argentina, but England was eliminated in the quarter-finals. Beckham missed a crucial opportunity in the penalty shootout as England was eliminated by Portugal at the European Championships.

After a battle with the other major Spanish team, FC Barcelona, David Beckham transferred to Real Madrid in 2003. At Real Madrid, Beckham became a member of the ‘Galacticos,’ a legendary team comprised of some of the best players in the world, including Cristiano Ronaldo, Luis Figo, Zinedine Zidane, and Roberto Carlos. He spent four years with Real Madrid and scored 13 goals.

David Beckham played in his final World Cup in 2006 in Germany, scoring a free kick against Ecuador in the round of 16 to help England go to the quarter finals, where they were defeated by Portugal and knocked out. Beckham made 117 appearances for England, scoring 17 goals.

David Beckham joined the Los Angeles Galaxy of Major League Soccer in 2007 and played for the organization for five seasons. He also spent time on loan at AC Milan over those five years, which drew criticism from the club’s supporters. In 98 games for the LA Galaxy, he scored 18 goals.

In 2013, David Beckham joined Paris Saint-Germain, a French club. It was a five-month contract, and he donated all of his earnings to charity. At the end of the season, he announced his retirement from professional football. Beckham spent $25 million the next year on an MLS expansion team.

David Beckham has won numerous titles over his career as one of the world’s best midfielders, but his most notable triumph is his role in Manchester United’s treble-winning season in 1998-99.

David Beckham married Victoria Adams, commonly known as ‘Posh Spice,’ on July 4, 1999, after a two-year relationship with the Spice Girls member. They have four children, the first three of whom are sons named Brooklyn, Romeo, and Cruz, while the youngest, Harper Seven, is a daughter.
David Beckham had an affair with her PA Rebecca Loos and model Sarah Marbeck, according to the now-defunct tabloid ‘News of the World.’ Everything was refuted by Beckham.

David Beckham has a net worth of $350 million dollars.