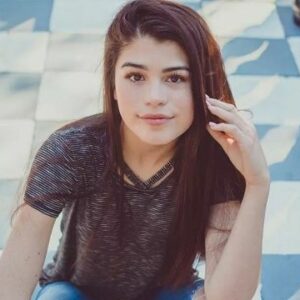 An American actress, singer, and dancer by the name of Dylan Conrique. Her younger sibling is the actor Caden Conrique. Early in life, Dylan became quite interested in performing. She received her first television part at the age of three in “The World’s Astonishing News!” She has appeared in music videos with Johnny Orlando and Mackenzie Ziegler as a trained dancer. She resumed her career as a professional actor in 2016 with the television movie “Weird Wild Wonderful Days of School.” In the brief time that Dylan has been a working professional, she has amassed an excellent résumé. She was chosen to play Kayla in the Brat Network original series “Chicken Girls” in 2017. She started her music career in the same year and has released two original songs so far. Dylan is quite well-liked across a variety of social media channels. She has 93 thousand YouTube subscribers in addition to over 7,000, 11,000, and 409 thousand followers on Twitter, Facebook, and Instagram, respectively.

One of those persons born to act is Dylan Conrique. In 2008, she made her television debut at the age of three. She made an appearance in the “The World’s Astonishing News” segment titled “Japanese Exchange Student Shooting” on Nippon Television Network. She made a comeback six years later, in 2014, to appear as a student in an episode of the show titled “Cancer Child’s Secret Message.”

She portrayed Dakota in the 2016 television movie “Weird Wild Wonderful Days of School.” She played Ruth’s daughter in her subsequent effort, a television film named “House of Darkness.”

She was cast in a recurring role in the well-known fantasy comedy “Henry Danger” on Nickelodeon. Later, she received a role in the short film “Frolic ‘N Mae”. She also contributed to the 2018 film “Walmart: The Box.”

In the 2017 web series “Chicken Girls,” Dylan plays Kayla, a skilled dancer who recently joined the school’s dance squad. The defining endeavor of Brat Network, the family-run YouTube channel, is the coming-of-age tale. The sitcom, which features Annie LeBlanc as Rhyme, the main protagonist, has received acclaim from both critics and viewers.

She released her debut song, “Heartbeat,” on February 14, 2017, Valentine’s Day, on her YouTube page. Since then, she has made another original song available. She has also performed renditions of the songs “Touch” by Little Mix and “Mercy” by Shawn Mendes.

David Conrique and Kathy Donahue-Conrique welcomed Dylan into the world on April 13, 2004, in Gilroy, a small city in Santa Clara County, California, in the United States. Caden, her brother who is also an actor, played Tim Sharp in the online series “Attaway Appeal.” In “Chicken Girls,” in which he co-stars with his sister, he is now reprising his role. Currently, Dylan and her family are based in the Los Angeles neighborhood of Toluca Lake.

One of the wealthiest and most well-known TV actors is Dylan. According to our research, Dylan Conrique has a net worth of $5 million, as reported by Forbes, Wikipedia, and Business Insider.