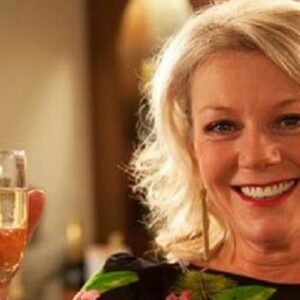 British actor Helen Pearson is best known for playing “Frankie Osborne” in the daytime drama “Hollyoaks.” Helen, who was born and raised in Leicester, England, began acting in the late 1980s and made her on-screen debut in the supporting part in the movie “Consuming Passions.” She made an appearance on the soap opera “EastEnders” in 1990 as “April McIntosh.” It was one of the most popular and enduring British soap operas ever. Her acting career was not particularly changed by “EastEnders,” but things started to shift swiftly around the turn of the century. In 2000, she was cast as “Carol Wareing” in the soap opera “Emmerdale,” and two years later, she was cast as “Frankie Osborne” in the opera “Hollyoaks.” One of the most adored characters in the program ended up being this one. She has performed in a few theater productions in addition to television.

On November 16, 1959, Helen Pearson was born in Leicester, England. Richard Cadell, her younger brother, who went on to become a well-known puppeteer, was a part of her childhood.

Midway through the 1980s, Helen began attending auditions. In 1987, she landed a small TV part in “The Growing Pains of Adrian Mole.” In 1988, she was cast in a small part in the British black comedy “Consuming Passions.” In the movie, she has the role of a grocery assistant.

Helen turned to television after trying her hand at acting in films but failing, and in 1990 she landed a part in the serial opera “EastEnders.” Since its 1985 debut, the program has grown to rank among the most popular soap operas in British television history.

In the soap opera, Helen performed the brief part of “April McIntosh.” Between March 20 and July 10, four episodes in which she made an appearance were broadcast. Helen played a tiny role, but she did so gracefully. This confirmed Helen’s abilities as the ideal soap opera actor.

Her TV roles decreased in the 1990s, which forced her to focus on stage performances. She traveled the nation with the cast of the play “Educating Rita,” in which she portrayed the title character. She was also connected to the Scarborough-based “Stephen Joseph Theatre.” She also gave a performance for “Hull Truck Theatre Company.”

She had an appearance in the comedy-drama series “The Darling Buds of May” in between her theatrical performances. In the 1990s, she also made appearances in “A Touch of Frost” and “Inspector Morse.”

She turned her attention back to TV in the 2000s and was cast in the soap opera “Emmerdale.” It was a protracted TV soap opera that put Helen back in the public eye. In the daily soap opera “Hollyoaks,” she landed the most recognizable role of her career as a result of this.

In “Hollyoaks,” Helen took up the character of “Frankie Osborne” in 2002.
The soap opera started airing in the middle of the 1990s and quickly rose to the top of the most-watched TV programs on British TV.

The following 15 years saw Helen make several appearances on the program, eventually surpassing all other female characters in terms of duration. Helen was hailed by critics for her portrayal of “Frankie,” who described her as a “feisty blonde.”

Her character finally “died” of a stroke in November 2017 after 15 arduous years. One of the most well-known and recognizable British soap opera characters of all time is “Frankie Osborne.” The devoted fans of the soap opera had strong feelings about Frankie’s passing, and many of them appreciated the plot’s surprise.

Helen Pearson was detained for driving while intoxicated in Staffordshire in 2015. She had three times the legal alcohol limit in her system and was driving without insurance. Following a trial, she received a 26-month driving prohibition, a €720 insurance fine, €122 in costs, €215 in court-related fines, and €86 in victim surcharge.

She was also required to perform 120 hours of unpaid work. Paul Faulkner, Helen’s partner, and she were wed in 2013. She posted pictures from the wedding to social media, claiming to be “the happiest girl alive.”

Helen is one of the wealthiest and most well-liked actors. According to our research, Helen Pearson has a net worth of $5 million, as reported by Forbes, Wikipedia, and Business Insider.