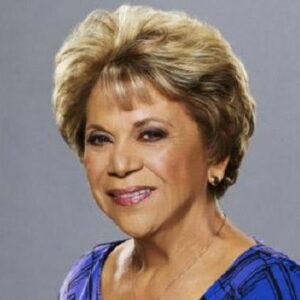 Lupe Ontiveros was an American actress best known for playing ‘Yolanda Saldvar’ in the 1997 historical musical drama film ‘Selena’. She was also well-known among television viewers for her part as ‘Juanita ‘Mama’ Solis’ in the American comedy-drama and mystery series ‘Desperate Housewives’. During her distinguished career, Lupe had worked on numerous television shows and acted in various films. She was the recipient of the National Board of Review award. She participated in the highly acclaimed film Chuck & Buck, for which she received numerous accolades and nominations. Lupe was also nominated for an Independent Spirit Award and an Emmy Award. Even though she had not done many leading roles in her career, she was well-known for portraying a number of noteworthy characters in supporting roles. She primarily portrayed housewives and grandmothers, which is a fascinating detail about her. Lupe, a well-known figure in both the cinema and television industries, had also performed on stage. As a prominent professional in the entertainment industry, she was seen as influential by Latinos. Utilizing her popularity to its fullest extent, she worked tirelessly to advance the welfare of the poor Latino population in the United States.

Their hardship instilled in Lupe the value of higher education.
She graduated from El Paso High School and then enrolled in Texas Woman’s University in Denton, where she earned a bachelor’s degree in social work.

Lupe Ontiveros began her career as a social reformer after receiving her bachelor’s degree in social work; however, dissatisfied with her social work job, she opted to pursue a career in acting. She was now married and received full support from her spouse.

She began her career as a film extra and quickly transitioned into a popular supporting actress. She also began working with Nosotros, a Los Angeles community theater, during the same period.

She once admitted that she had performed the position of a maid too frequently in her career, a role she was typecast in due to her Latino heritage. However, she proudly admitted that she was honored to represent the segment of the population that had sacrificed all to construct the nation.

Lupe made a cameo appearance in the 1993 film ‘Blood in Blood Out’ as ‘Carmen,’ a drug dealer who is busted by the police during an undercover operation.

In 1997, she portrayed ‘Yolanda Saldvar’ in the film ‘Selena’ and received critical acclaim for her performance. She co-starred with Jack Nicholson and Helen Hunt in the Academy Award-winning picture “As Good as It Gets” in the same year.

Lupe Ontiveros went on to appear in numerous other films over the years, including “Picking Up the Pieces,” “Gabriela,” “Dark Mirror,” and “Universal Signs.” In her later years as an actress, she frequently portrayed a wise grandma.

A career in the Television Profession

The majority of Lupe Ontiveros’s appearances on television had been in special or guest capacities. Her most significant television role was Louisa in Veronica’s Closet, for which she won an ALMA Award in 1998. Her performances in the films Pasadena’ as ‘Pilar’ and ‘Greetings from Tucson’ as a grandma were also well received.

Lupe Ontiveros was offered a role in the 2000 film Chuck & Buck that was not based on her Hispanic background, and she accepted it without even reading the scripts. She was nominated for “Best Supporting Actress in a Motion Picture” at the 2000 Independent Spirit Awards for her performance as Beverly Franco.

Lupe Ontiveros received the Best Supporting Actress award from the National Board of Review for her participation in the film Chuck & Buck.

She was nominated for an Emmy for Best Guest Actress in a Comedy Series for her part in the prime-time American soap opera ‘Desperate Housewives
In 2002, she was awarded the Lifetime Achievement Impact Award by the National Hispanic Media Coalition.

Lupe Ontiveros wed Elas Ontiveros in 1966 and relocated to California to launch an automobile-related business. When she became dissatisfied with her employment in social work, her husband pushed her to pursue acting.
Three children were born to the couple: Nicholas Ontiveros, Alejandro Ontiveros, and Elias Ontiveros. Two of them have hearing loss.

Lupe Ontiveros died of liver cancer on July 26, 2012, at the age of 69, at the Presbyterian Hospital in Whittier, California. She was interred in Rose Hills Memorial Park in Whittier, and her husband, three sons, and two grandchildren survived her.

Lupe Ontiveros was an American actress with a $250 thousand dollar net worth. Lupe Ontiveros, born in El Paso, Texas on September 17, 1942, is most recognized for her portrayal as Selena’s manipulative manager in the 1997 film Selena.

Even though Ontiveros had been active in the entertainment industry since 1976 and had been in a variety of roles in several important films and television programs, her portrayal of a character who was both honest and corrupt created a lasting impression on viewers.

This actress said in an interview that she had played a maid more than 150 times on television, film, and stage!
Prior to becoming an actress, she was a social worker for more than 18 years. She was a founding board member of the downtown Los Angeles Latino Theater Company.