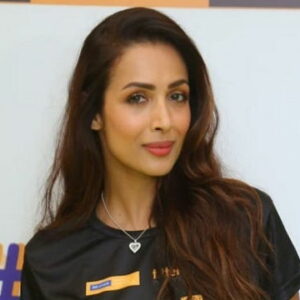 Malaika Arora Khan is an Indian actor, dancer, model, VJ, and television presenter. ‘Chaiyya Chaiyya’ (from ‘Dil Se..’), ‘Maahi Ve’ (from ‘Kaante’), ‘Munni Badnaam Hui’ (from ‘Dabangg’), and ‘Anarkali Disco Chali’ (from ‘Housefull 2’) are some of her best-known dance pieces. She was born and reared in Thane, Maharashtra, India, and has always had a passion for dancing and modeling. Her portrait was published in the journal ‘Society’ while she was a teenager, which led to modeling assignments and an invitation to work as an MTV VJ. She appeared in ad campaigns for ‘De Beers,’ ‘Pearl Pet,’ ‘Tanishq,’ ‘Mafatlal,’ and ‘MR Coffee,’ and hosted series such as ‘Club MTV,’ ‘Love Line,’ and ‘Style Check,’ for ‘MTV.’ She also appeared in marketing campaigns for ‘De Beers,’ ‘Pearl Pet,’ ‘Tanishq,’ ‘Gur Naalo Ishq Mitha’ and ‘Dholna’ were her next appearances in music videos. However, it was the dance number ‘Chaiyya Chaiyya’ from the film ‘Dil Se..’ (1998) that made her a household name, and it was followed by several other dance numbers. She’s been a celebrity judge on series like ‘Nach Baliye’ and ‘India’s Got Talent,’ among others. Arora is married to Arbaaz Khan, an actor-producer, and they have a kid together. In 2017, the couple divorced. She is currently dating Arjun Kapoor, an actor.

Arora was born on October 23, 1973, in Thane, Maharashtra, India, to Anil Arora, a Punjabi who previously worked for the ‘Merchant Navy,’ and Joyce Polycarp, a Malyali (from Kerala) Catholic. Amrita Arora, her younger sister, is also an actress. In Swahili, the name “Malaika” means “Angel.”
Arora began dancing lessons at the age of four. In Thane, she attended ‘Holy Cross Convent High School,’ an all-girls school. When she was 11 years old, her parents split. Following this, her mother and two daughters relocated to Borla Society in Chembur (another Mumbai suburb). Arora graduated from Chembur’s ‘Swami Vivekanand School,’ where her aunt, Grace Polycarp, served as principal. She later enrolled in Churchgate’s ‘Jai Hind College,’ but due to employment obligations, she did not complete her college education.

Arora has loved being in front of the camera since she was a child and longed to be a model. When she was 17, photographer Suresh Natarajan took several of her photos, which were noticed and appreciated by Suma Varghese, the editor of the journal ‘Society.’ Arora made her debut in the April 1993 issue of ‘Society,’ and began obtaining modeling contracts shortly after.

‘Mafatlal,’ ‘Tanishq,’ ‘Benzer,’ ‘Bare Necessities,’ ‘Pearl Pet,’ ‘Tribhuvandas Bhimji Zaveri,’ and ‘De Beers,’ among others, have used Arora in their ads. She has been to many nations for exhibits as a model. She met actor Arbaaz Khan, whom she eventually married, while working on an assignment for ‘MR Coffee’ (which gained a lot of attention).

‘MTV’ was launched in India during this time. MTV chose Arora to be a VJ and host for the show ‘Club MTV.’ She liked her job since it required her to communicate to people and engage with them. She was able to do both modeling and VJing at the same time for a while. She and co-host Cyrus Broacha participated on ‘MTV’ series such as ‘Love Line’ and ‘Style Check.’

In 1998, Arora starred alongside Jas Arora in the music video ‘Gur Naalo Ishq Mitha’ by Bally Sagoo and Malkit Singh. Her dance number ‘Chaiyya Chaiyya’ in the film ‘Dil Se..’ followed (1998). This dance, which included Arora and Shah Rukh Khan, was performed on top of a moving train. It earned her a lot of respect and celebrity. In 1999, she starred alongside her then-husband, Arbaaz Khan, in the music video for Shubha Mudgal’s song “Dholna.”
Arora stated in an interview that she has never been interested in acting. As a result, she has only appeared in a few films. ‘EMI – Liya Hai Toh Chukana Padega’ featured her as ‘Nancy’ (2008). The film, however, was not a monetary success. ‘Maa Tujhhe Salaam,’ ‘Om Shanti Om,’ ‘Helloo India,’ ‘Housefull,’ and ‘Happy New Year,’ among others, featured her in cameo roles.

With the award-winning film ‘Dabangg,’ Arora became a producer alongside her actor-producer husband Arbaaz Khan (2010). She went on to create ‘Dabangg 2’ (2012) and ‘Dolly Ki Doli’ (2013). (2015).
Men’s magazine ‘Maxim’ named Arora the “Sexiest Woman” in 2007. She owns and operates ‘Divayoga,’ a yoga studio in Mumbai that she founded in 2018. Since 2015, Arora has worked as a style editor for the lifestyle brand ‘The Label Life,’ alongside Bipasha Basu and Sussanne Khan.

During an ad campaign in 1993, Arora met actor-producer Arbaaz Khan, the son of screenwriter Salim Khan and brother of stars Salman and Sohail Khan. On December 12, 1998, they married. Arhaan, the couple’s son, was born on November 9, 2002.

The couple divorced on May 11, 2017, after they separated in March 2016. She omitted the “Khan” from her name after the divorce.

According to reports, Arora is dating Arjun Kapoor, the son of film producer Boney Kapoor and his ex-wife, the late Mona Shourie Kapoor.

Malaika Arora’s Net Worth is approximately $10 Million US in 2022.